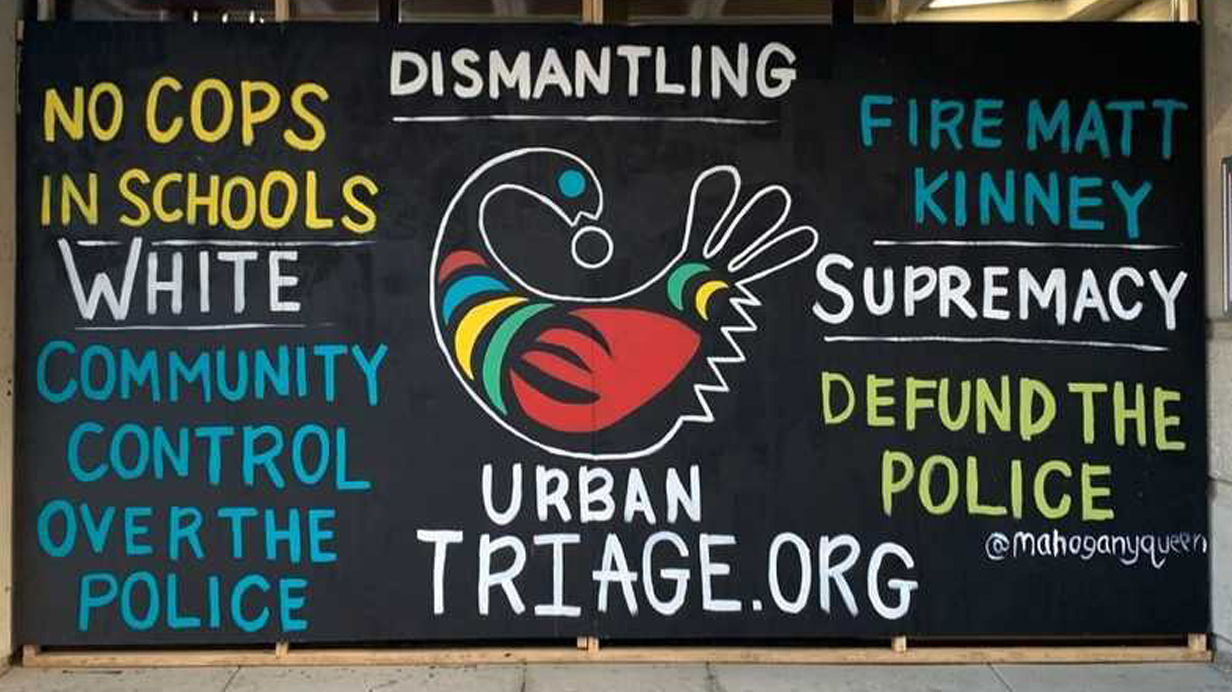 Violence reigned supreme throughout Madison during the summer of 2020, as protesters committed countless acts of robbery, assault, arson, vandalism, extortion, and other various forms of disorderly conduct. One of the groups enabling all this was Urban Triage, led by Brandi Grayson.

Simply put, Grayson hates America. “Within this United States of America, we got the first white supremacy state. A state in which white supremacy and capitalism are one and the same,” she said in June 2020. Grayson is committed to transforming the country and tearing down its institutions.

Early on, Grayson and her organization, Urban Triage, helped lead a march that shutdown John Nolan Drive and ended with a rally at the county jail demanding it release every black inmate. 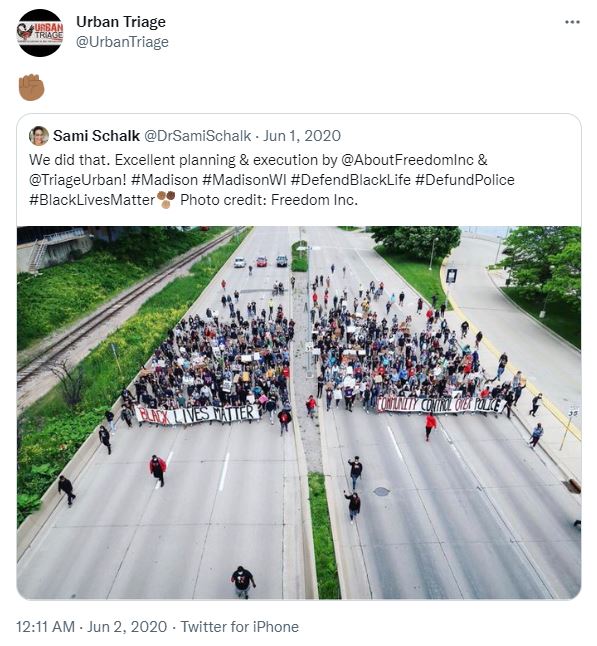 Take a look at this powerful video shot by our Communications and Operations Director https://t.co/WAvcr8VKjV

While protesters looted State Street, Urban Triage was there providing key logistics support and blocking the police from restoring order.

For our action today, we are having political education at 4pm. A group of us will also be out tonight at the Capital SUPPORTING our youth, if you would like to join us. They usually kick-off their protests around 8pm https://t.co/Rto1W5B7oo

Grayson defended the looters publicly stating, “The spirit that you see right now exploding from our youth is the warrior spirit.”

Grayson is also a leader in the #DefundthePolice movement and helped pressure the Madison school district to remove safety officers from the schools.

We’ve changed the time of our Facebook Live to 6pm today.

Be sure to check out Urban Triage’s workshop starting at 4pm: https://t.co/mFpjTE0vxD

Then head over to Freedom, Inc.’s Facebook at 6pm to watch a live conversation about #DefundPolice. pic.twitter.com/DBOgdt1l0z

By mid-June, the nightly riots had transitioned into a daily routine of harassment and extortion around downtown Madison. Then came another flashpoint. On June 23, 2020, Devonere Johnson was arrested in front of Cooper’s Tavern for extortion. A crowd gathered at the courthouse blocking traffic and demanding his release. It soon escalated into a full-blown riot that resulted in protesters toppling statues at the State Capitol, beating Sen. Tim Carpenter, and firebombing the City County Building.

Public officials knew Grayson was instrumental in the escalating violence. Dane County Sheriff Dave publicly begged her to denounce the violence to help restore order to the community. Grayson ignored these pleas. Instead, Urban Triage would even go on to advocate violence in other parts of the country.

We are tired of being played with. This was nowhere near what needed to be done so whatever happens tonight is on the Louisville’s hands. https://t.co/2kOvmoMqG8

Urban Triage seems to only believe in two kinds of violence: “silence” and “police violence”

“We know through your silence that you support the wrong that happened. SILENCE NOW IS VIOLENCE” Brandi Grayson from @UrbanTriage in Madison, WI at the #InvestInUs Press Conference

“Put your money where your mouth is!” Brandi Grayson @urbantriage in Madison, WI at the #InvestInUs Press Conference to #EndPoliceViolence

An ongoing example of Urban Triage’s commitment to violent activism is it’s “Co-Conspirators Workshop.” That’s a training program for white people who want to get involved in Black Lives Matter. “White people must be willing to use their privilege, resources, and their bodies in defense of Black lives,” according to the program’s webpage. This mission aligns with its tactics in June 2020 that included blocking police from looters on State Street.

Given this track record, Urban Triage might seem an unlikely partner to help reduce violence in the community – but apparently to Public Health Madison and Dane County (PHMDC) it was the obvious choice.

On July 25th, PHMDC awarded $300,000 in total grants to five different groups including Urban Triage for its “Roadmap to Reducing Violence.”

There is no criminal justice component to Madison’s plans to reduce community violence. Instead, the Roadmap preaches “restorative justice.” That philosophy emphasizes “righting the wrong” instead of punishing the criminal.

Applying the concept of restorative justice to the looting of State Street, one would not seek to convict the looters. They committed those crimes in response to inequity in society. Restorative justice would seek to correct that inequity. Meanwhile, nothing needs to be done for the shop owners. They’re all insured, so there’s no wrong that needs to be corrected. Given that approach, it makes sense that Madison would turn to a group like Urban Triage.

However, Madison shouldn’t expect much for its money. Urban Triage knows how to squeeze government checks for all they’re worth. Just a year ago, it got a $12.5 million contract with the county to distribute rental assistance. Urban Triage was allowed to keep $1.6 million for administrative costs, leaving $10.9 million available for rent assistance. Subsequently, it relied on volunteers using their own computers to run the program. It also decided to increase its take to $1.96 million and reduce the amount of available rental aid to $10.6 million. (It’s asking the public for donations to get it back up to $10.9 million). 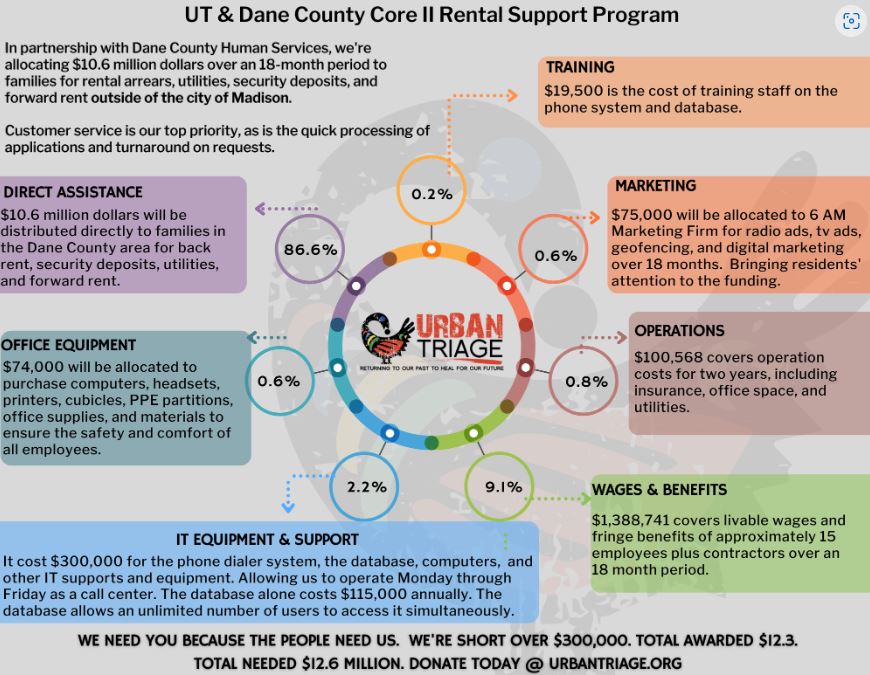 Despite these hefty operations expenses, Urban Triage runs the rental assistance program as a parttime endeavor. Phonelines are only open 11 hours a week from Monday to Wednesday, and in-person support is only available 6 hours a week on Wednesday and Thursday. The office is closed on Fridays.

The total cost of the “Roadmap to Reducing Violence” is $1,065,000, which is being funded by Covid relief money. None of the money is going to law enforcement. The health department won’t say how much Urban Triage got out of the initial $300,000. It told MacIver News that that information is on the grant applications, but it would not release copies of the applications without an open records request. MacIver submitted that request on Aug. 2nd.

“The organizations that this funding is intended to support are led by individuals who are passionate about preventing violence in our community and expanding existing services and programs to improve outcomes,” Public Health director Janel Heinrich said.

To claim that Brandi Grayson and Urban Triage are passionate about preventing violence in the community is a complete lie – a lie only a liberal public official could ever say with a straight face and get away with. 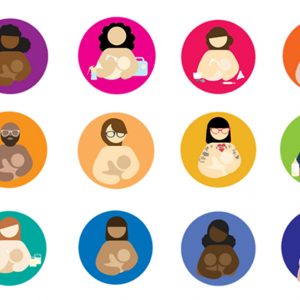