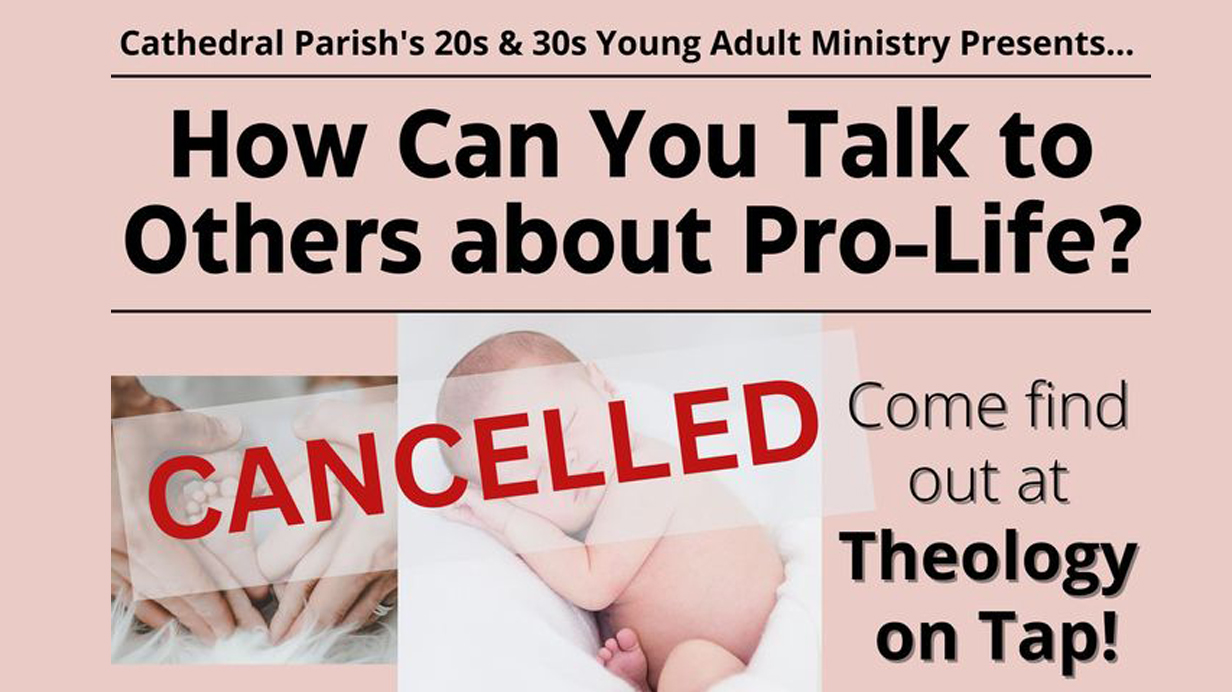 “How can you talk to others about pro-life?” Apparently in Madison Wisconsin, you can’t.

Up until two weeks ago, the Brink Lounge was one of the few venues in Madison where you could host a pro-life event.

Cathedral Parish, the Catholic church right around the corner from the Brink, has been holding its monthly Theology on Tap series there for the past 15 years. Theology on Tap is a program for young Catholic adults that allows them to interact in a social setting and learn more about their faith.

Each month, a speaker presents a new topic. So far this year, there have been talks on being called to holiness in daily life, why Catholics have a pope, what it means to be baptized, and spiritual friendship. The topic for September was “How can you talk to others about pro-life?”

Monsignor Kevin Holmes, Cathedral Parish Pastor, said “It didn’t seem a particularly controversial topic for a program sponsored by a Catholic parish.  But this is Madison.”

And as the mob learned that the Brink Lounge was going to be hosting a pro-life speaker, “all hell was breaking lose,” according to the owner, Curt Brink. The Brink’s Facebook was overwhelmed with threats and the phone was ringing off the hook.

“They were going to come and storm the place,” Brink explained. That wasn’t the kind of trouble he wanted and decided to cancel the event.

“It just got so heated so fast, that’s why it was just better to stop it that night,” Brink said.

The parish was notified in an email.

“After a discussion we have decided to cancel tomorrow’s event and all further events related to Theology on Tap. The controversial subject of your outreach no longer aligns with that of the business. All events have been deleted from our website and social media. We mean no harm to your organization, but we can no longer provide a space for Theology on Tap. We do wish you luck in your future endeavors,” the email read. 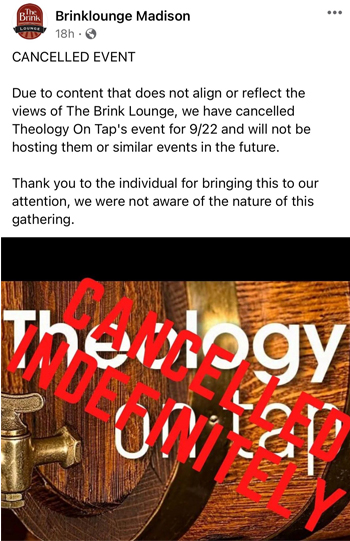 The Brink also posted a picture on its Facebook page announcing to the public that the event was “Cancelled Indefinitely.” One person on that post accused the young Catholics of being MAGA Republicans.

“There is a growing conservative movement in the Catholic Church that aligns with the MAGA movement. It is not really Catholic and it is not really democratic,” he wrote. “Those MAGA folks can drink beer in their MAGA churches.”

That surprised Msgr. Holmes to hear.

“I must say that this is a personal ‘first’ for me.  I’ve been accused of a number of things over the years, but never of running a parish that wasn’t really Catholic!  Who can think that it isn’t Catholic to be pro-life?”

Holmes and Brink both expressed disappointment that too many people in Madison can’t tolerate any idea they don’t agree with.

“[The presentation] was how to talk to people who don’t agree with you.  Don’t we often hear it lamented that people seem unwilling to engage others in civil dialogue these days?” Holmes said.

“In fact, our interest in talking to people who do not already agree with us is characteristically Catholic,” Holmes continued. “And it reflects our Catholic optimism about the human person – one can appeal to the reason and conscience of those who are confused on some issue.”

Brink said he’s always welcomed any group to use his venue regardless of their ideology.

When speaking with MacIver News, Brink said he just wanted to cancel that one event that one night to diffuse the situation. He was not aware that his staff had notified the parish that they had completely ended the relationship.

Unfortunately, the young Catholics at Cathedral Parish got the message loud and clear from Brink’s employees that they are no longer welcome. They cancelled their October meeting, while they look for a new venue in Madison willing to host such a controversial organization.