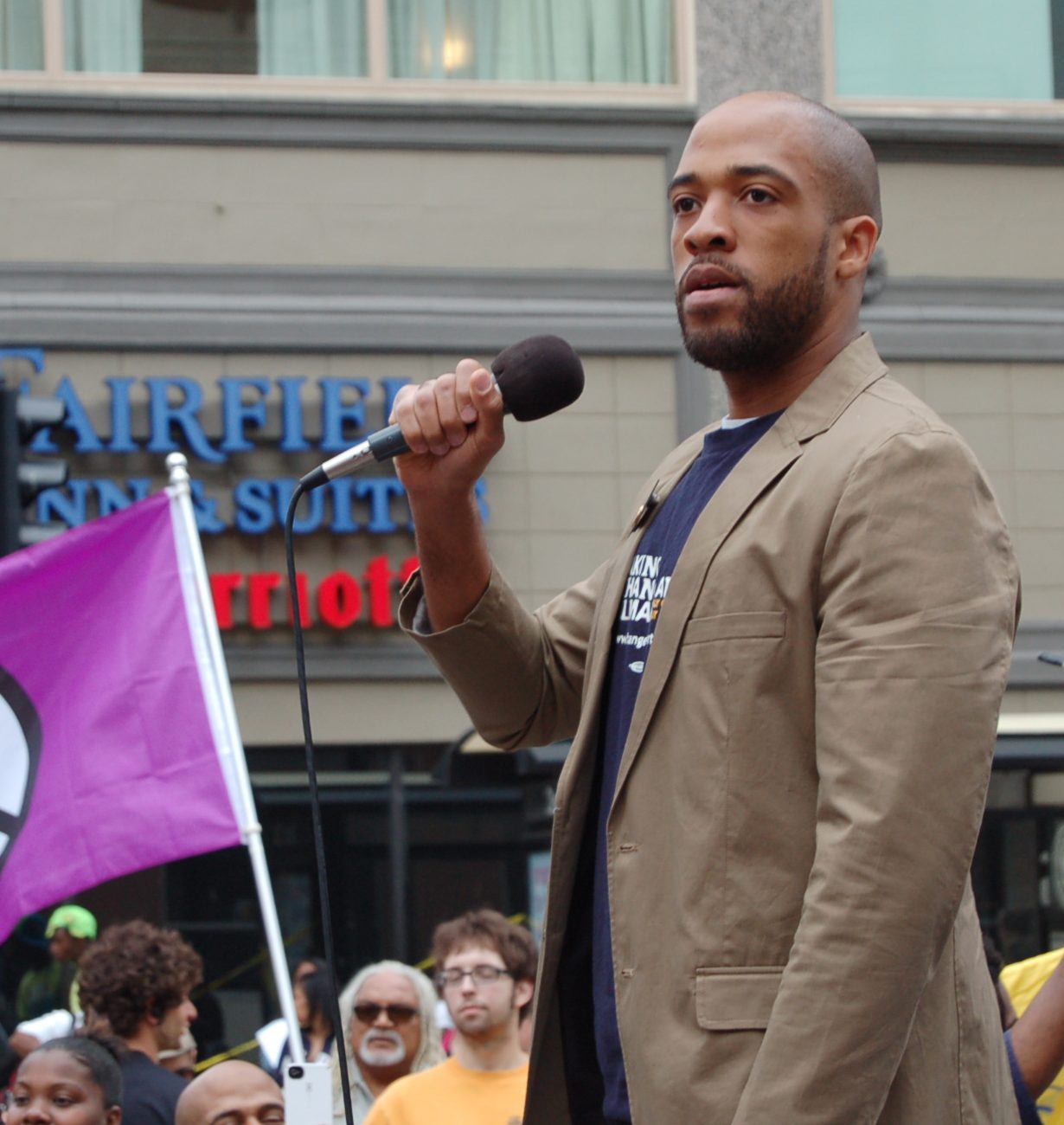 Kudos to Bice on Barnes’ abolish ICE position but there is so much more.

What is the Mandela Barnes Plan for Wisconsin?

Sweeping police budget cuts.  Abolishing ICE as a start.  Dismantling capitalism to stop climate change.  Building communities through destruction.  And could we just be nicer to criminals already?

No, the Lieutenant Governor won’t be taking any questions today.  Or maybe ever.

After the 2020 election, Mandela Barnes did an interview about what he thought his party needed to do to improve their performance.  His Monday morning quarterbacking then boiled down to this:  be bolder, go bigger, don’t moderate on tough issues like defunding the police, racial injustice, universal health care, and the Green New Deal.

If you’re moving in the direction that your Republican opponent is already in, who’s going to take you seriously?” Barnes said. “If we get into these fights and we end up going to a place where less bold is the path, then I think we kiss those votes goodbye.”

Just 15 months later, as the leader in the Democrat primary field for U.S. Senate, Barnes has ditched his own advice, jettisoning his “bold” unpopular stances while his handlers shield him from answering unvetted questions.

You’d think he’d be getting wall-to-wall coverage for his public abandonment of ‘bold’ positions (while retaining endorsements from for the extremist groups behind them), for hypocrisy, for hiding behind his campaign handlers…a things candidates, especially leading candidates, typically take heat – and take questions – for.

Not Mandela Barnes.  As the old saying goes, ‘don’t mess with what works,’ and slippery or downright fringe positions along with dodging questions is the Barnes playbook and so far has always earned him a pass from the mainstream media, and from others in his party. 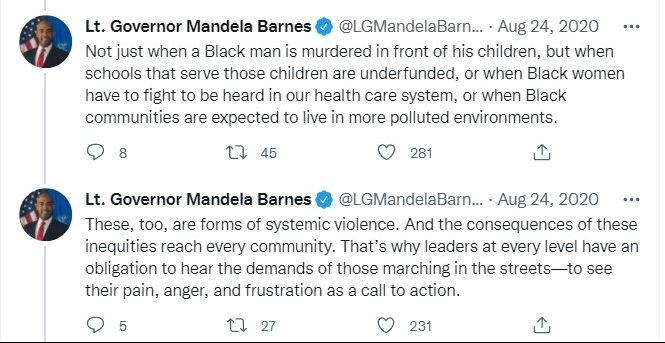 Barnes has been the Wisconsin darling of all the national extremist groups advocating for defunding or abolishing the police.  He’s always insisted communities are “overpoliced.” As recently as last summer, Barnes was still on the Defund the Police bandwagon telling PBS in June that he thought money for social workers and neighborhood services should come from “bloated budgets in police departments.”

“But the minute you talk about reducing a police department’s budget, then it’s like all hell breaks loose and everybody acts like you’re signaling Armageddon,” Mandela Barnes, June 10, 2020

Barnes also claimed the police were needlessly whiny about a little defunding talk, ‘the minute you talk about reducing the police department’s budget, everybody acts like you’re signaling Armageddon’ and that sweeping budget cuts are not an attack on the police.

Fast forward a few months and now Barnes says, with a wink and nod to the multiple defund-police organizations who bankroll him, that he does not support defunding police. And he wants us to know he has a friend, ahem, he has attended a law enforcement swearing-in ceremony, so defund the police is just crazy talk, obvs.

Does Barnes mean he won’t abolish police forces, or does he mean he opposes any cuts to police budgets or something else entirely? Has he had a conversion after enjoying the luxury of a special Dignitary Protection Unit comprised of multiple state patrol officers protecting and chauffeuring him at taxpayer expense?  Nobody knows, and Barnes ain’t talking.

Barnes took to social media to ask for an Abolish ICE shirt and he got one. 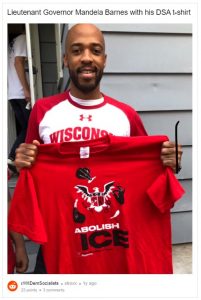 Now, Barnes says the Abolish ICE slogan “doesn’t capture all the work that needs to be done.”  He says he supports reforms, and “ensuring no one coming to this country has to experience traumas like family separation” but he “isn’t in any one person’s camp.”

This renders his position deliberately, utterly, incomprehensible.  Does Abolish ICE not go far enough? What would capture all the work that needs to be done?  What is Barnes’ position on the current 20,000 ICE detainees, an increase of over 30% in the time since Biden took office?

In 2020 the nation watched as a woman who had previously called 911 to report she was raped in her home in front of her child, had to call the police again, when her assailant showed up armed, to commit another crime. 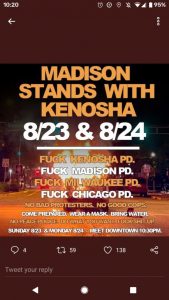 Mandela Barnes saw Kenosha riots as an opportunity to fan the flames of violence.  He said an armed man, with an arrest warrant for rape, taking the car of the woman he was accused of assaulting, resisting police was “de-escalating a fight” that his shooting was a police “vendetta,” and didn’t “need an investigation.”

“This was not an accident,” Barnes said.  “This wasn’t bad police work.  This felt like some sort of vendetta being taken out on a member of our community.  The officer’s deadly actions attempted to take a person’s life in broad daylight.”

Barnes, too, admitted that he did not know any of the relevant facts of the Blake shooting, but he provocatively (and, it turns out, completely ignorantly) characterized it as a “vendetta being taken out on a member of our community.”

Barnes didn’t call for calm or peace.  Instead, he said devastation “builds” community.

One can’t help but wonder how much violence and destruction Barnes thinks it takes to build a really great community. Or why Barnes gets a pass on these shameful assertions.

Keeping Criminals on the Streets

Wisconsin is experiencing the highest level of violent crime over 35 years.  In recent months families in Waukesha watched an offender out on low bail deliberately speed through their Christmas parade killing 6, and just 2 weeks later the same community was shaken by the rape of an 87-year-old grandmother by a 14-year-old.

Barnes’ primary opponents are united against the elimination of cash bail. After backing off other positions, it raises questions as to why this issue is the one Barnes feels is the most important to differentiate himself from the field on, particularly considering the lives lost due to the lack of substantive bail. 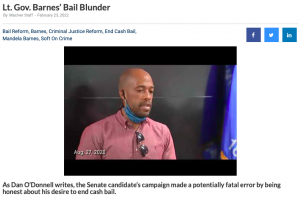 Barnes chaired Evers’ Climate Change Task Force, which produced dozens of radical recommendations at a cost in the trillions, raising prices for necessities like heat and gasoline for families slammed by inflation.  Barnes required ‘environmental justice’  be the primary goal of the task force, which discussed destroying all prisons, ending Voter ID, dismantling capitalism, and ending racism as necessary to combat. . . climate change.

One of the most stunning proposals the task force considered was to upend the cornerstone of our judicial system and forcing the burden of proof for “environmental racism” from the accuser onto the accused. Because it’s “really hard to prove” otherwise.

Any one of these astonishingly fringe recommendations warrants intense scrutiny and questions of Barnes as leader of the task force.  Barnes has taken these ideas abroad as well – telling a U.N. gathering in Spain that in order to stop climate change, we have to “stymie capitalism.”  Assuming the mainstream media would ask the frontrunner in the Democratic primary for the U.S. Senate – at a minimum – about his belief in the link between Voter ID and climate change is apparently too much to expect.

Barnes has advocated that Wisconsin taxpayers subsidize UW System tuition for illegal immigrants, but when it comes to kids who are trapped in a bad school system, trapped in a district that’s failing to teach them to do basic math and English, Barnes offers nothing.  He has been an outspoken critic of the school choice program, claiming to be the product of public education.

But it turns out the truth is quite a bit different.

Barnes’ mother was a public school teacher, and his grandmother worked for MPS, yet when his family made choices about his education, their first choice for Barnes was a private religious school.  Barnes attended kindergarten at Holy Redeemer, a Christian school in Milwaukee, and an early participant in Wisconsin’s 33-year-old school choice program.  Barnes’ family believed he would benefit more from the advantages of a private school education than attending failing MPS schools, but Barnes is vigorously opposed to other children enjoying those same advantages.

By the time he got to John Marshall High School, he had been given tools for success that current students in MPS are not getting.  Under 4% of MPS students can read or do math at grade level today.  But while he touts his graduation from a public school, he is ashamed to admit that he had a privileged education he would deny other children.

When he gave their commencement address in 2019, Barnes said he was proof that a John Marshall education could take graduates places.  Marshall has only a 76% graduation rate, and their ACT scores lag the state, and worse, fall short of even the abysmal MPS scores.  But then, most Marshall students didn’t have the privileged opportunities Barnes’ family made sure he had.

Barnes has never been pressed on his private school education, and he’s never voluntarily spoken about the reasons his family – MPS insiders – chose for him an education he would deny other Milwaukee kids.  Or how he can justify wanting to provide state subsidies for illegal immigrants to attend college but begrudging parents the opportunity to pick the school that’s best for their child like his did.

Barnes has gone underground, dodging the press and his staff offers to provide written answers rather than in-person interviews with the candidate.  Statements are released by his handlers, and he is not made available.

It could be because as the primary frontrunner he doesn’t want to risk a slip-up.  It could be his campaign team doesn’t trust him to stay on message.  It’s also possible that based on previous on-camera Q&A where the candidate became rattled and agitated, his handlers are keeping him off-camera and under wraps.

Regardless of the reason, his strategy of hiding from the media for 6 months until the primary seems to be working, and the disappearing act warrants questions.  Questions that Barnes is not getting.

Mandela Barnes is the front-runner in a hotly-contested primary, and yet he is hiding from the press, seemingly unable to manage questions unless he has them in advance.  He’s grown accustomed to getting a pass from the media and his own party, but how long will the mainstream media let his flabbergasting positions on extreme positions on issues go unremarked and unquestioned.