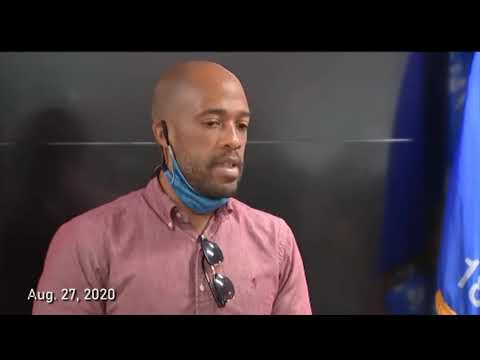 As Dan O’Donnell writes, the Senate candidate’s campaign made a potentially fatal error by being honest about his desire to end cash bail.

The general rule for Democrats in election years is to conceal as best they can their most radical beliefs and policy preferences.  For the most part, Wisconsin Lieutenant Governor and US Senate candidate Mandela Barnes has succeeded, telling The Milwaukee Journal Sentinel recently that he does not support defunding the police or abolishing ICE…even though he said in 2020 that he wanted to “invest more in neighborhood services” by moving funds “from over-bloated budgets in police departments” and was pictured in 2018 smiling and holding up a shirt that reads “Abolish ICE.”

In early Summer, 2018—amid liberal hysteria over “kids in cages” at America’s southern border—abolishing ICE was a popular left-wing talking point, but it strangely disappeared as that year’s midterms approached.  Ahead of the 2022 midterms, with illegal immigration hitting all-time highs each month, there isn’t a swing-state Democrat in the country willing to publicly call for the elimination of ICE. Barnes is among them.

“I am not a part of the Abolish ICE movement because no one slogan can capture all the work we have to do,” he said in a statement.

In 2020, when protests and riots over the death of George Floyd broke out across the nation, Democrats responded to the lawlessness by calling for police departments and other law enforcement agencies to be defunded.  Some in the most radical cities even succeeded, with such disastrous results that even anti-cop zealots like Barnes have distanced themselves from it.

“I don’t support defunding the police,” he told The Wall Street Journal.

Barnes, like most Democrats, understands that he can’t get elected if the public learns what he really believes, so he just lies about it.  This has been a tried-and-true election-year strategy for decades, but it seems one of his staffers didn’t get the memo.

When the Journal Sentinel’s Dan Bice asked Barnes’ Senate campaign whether Barnes still stands by a 2016 bill he authored that would eliminate cash bail in Wisconsin, Barnes spokeswoman Maddy McDaniel said absolutely.  Not only that, she gushed, he supports ending cash bail nationally.

“The lieutenant governor believes we should decide who is imprisoned before their trial begins based on how much of a risk they pose to the community, not on how much money they have,” she said.

Barnes probably wishes he would have fielded that question instead.  Three months to the day after a felon out on just $1,000 bail killed six people and injured dozens of others at the Waukesha Christmas Parade, his campaign is doubling down on a position that isn’t just politically toxic; it is literally deadly.

New York’s failed experiment is proving this in real time.  On January 1, 2020, the state eliminated cash bail for most misdemeanors and nonviolent felonies.  It proved so disastrous so quickly that it was amended just three months later, but still allowed tens of thousands of criminals to remain free while awaiting trial.

From January 2020 to June 2021, a staggering 41 percent of those released without bail committed new crimes while on the streets, including 23 percent who committed new felonies.  More than 4,400 of them committed violent felonies.

This helped push New York City’s violent crime rate to unprecedented levels.  Shootings rose 97 percent in 2020 and murders increased by 45 percent.  As high as those totals were, they both increased slightly in 2021.  In the first month of 2022, overall crime rose 38.5 percent over January 2021.  Last month alone, five New York City Police officers were shot in the line of duty, two of whom were killed.  The crime problem has gotten so bad that even liberals in New York have had enough.  In a recent Siena College poll, 65 percent of New York voters say they support tightening bail laws.

That is just what the Republican-controlled Wisconsin Legislature is attempting.  On Tuesday night, the State Senate passed a constitutional amendment that would give judges more flexibility in setting bail amounts, thereby allowing for higher bail amounts and fewer dangerous criminals on the streets.  The measure will have to pass both houses of the legislature in two sessions before it is put to voters, but the Senate vote was an important first step in cracking down on the dangerous leniency that has infected criminal justice system.

Barnes’ campaign would have been wise to at least pretend to be on board with this since the ongoing disaster in New York proves that it is good policy in addition to good politics.  Instead, it made the potentially fatal mistake of being honest about Barnes’ beliefs in an election year.

It is revealing that such honesty can be so devastating for a Democratic candidate, but it is also fortunate for Wisconsin since Barnes being elected a US Senator would prove to be far more damaging to public safety.