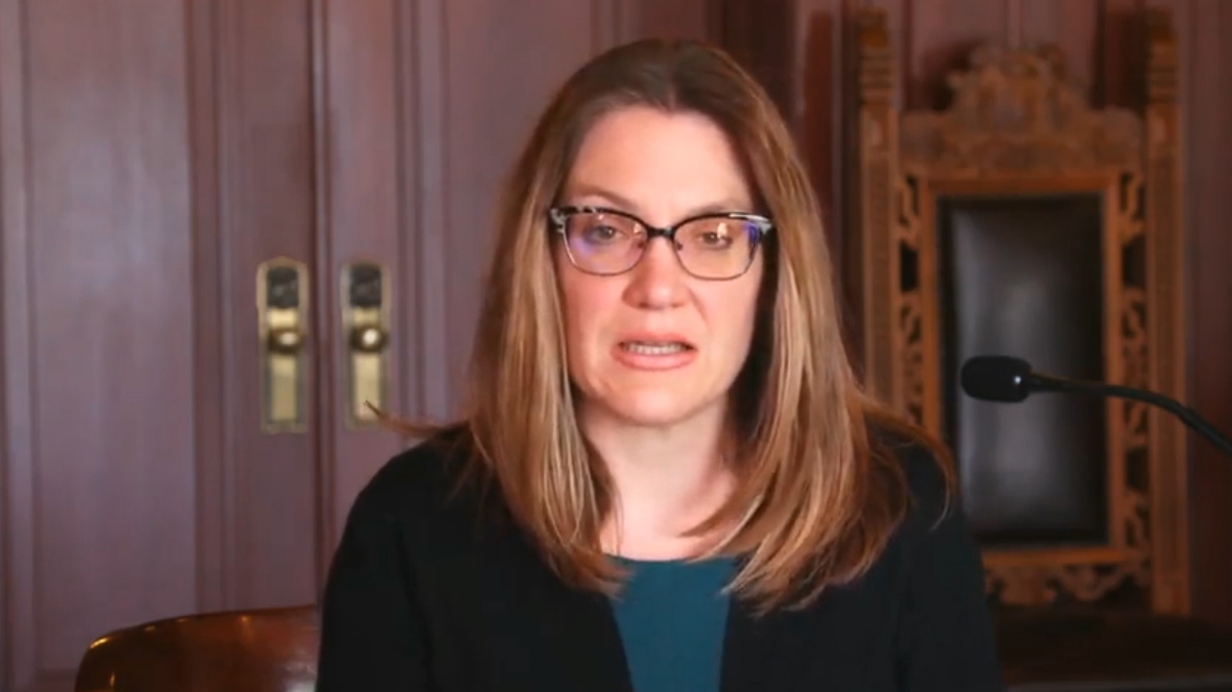 A MacIver Perspective By: Bill Osmulski

On Monday, January 18th, the incoming Biden Administration announced that it was appointing Wisconsin DHS Secretary-Designee Andrea Palm to be the Deputy Secretary of HHS. It’s hard to imagine she will be missed much in Wisconsin.

There was really only one reason why Gov. Evers picked Andrea Palm to be his Department of Health Services Secretary. Palm had no personal connection to Wisconsin. She was not a doctor. She had no formal education in public health. She had no track record of leading a major government agency. None of that mattered. She was politically connected. Not surprisingly, she proved entirely incapable of leading DHS, especially during a major public health crisis.

Generally inept, she never demonstrated a solid grasp of her department’s operations. Palm was forever accompanied by a binder prepared by her staff. Even with it by her side, Palm was often incapable of answering even the most basic questions about how DHS was handling the COVID crisis.

How many ICU beds will Wisconsin need? How many healthcare providers have caught the virus? How many people are in the hospital with COVID?  When will the 1,500 ventilators you ordered arrive? Who did you order those ventilators from? The answer was always: I don’t know.

More often than not, what DHS staff did put in her binder was utter nonsense. It always supported, rather than informed, the Evers Administration’s political agenda and Palm read it faithfully.

With a straight face, Palm told reporters in late March that the state’s death toll could climb from 5 to 1,500 in just two weeks unless Evers’ Safer at Home order was not followed. Needless to say, there is zero evidence that was ever a real possibility, yet the state was locked down for weeks.

As that predication imploded, Palm tripped all over herself trying to construct a believable narrative. MacIver News kept track of every twist and turn.

Palm helped set off two constitutional crises in April by advising the governor to take actions he lacked the authority to do. She advised him to delay the Spring Election, which the Supreme Court blocked at the last minute.

Then, when Evers’ Safer at Home order was about to expire, Palm stepped in. Evers did not have the authority to issue the order for more than 60 days without the legislature’s approval. Palm, however, claimed that she did. She issued Emergency Order #31 to close the state indefinitely. The legislature sued her and won.

Evers and Palm did not intend to lift that lockdown until the state met the criteria of their “Badger Bounce Back” program (BBB). Those criteria seemed designed to keep the state closed forever. They also seemed to contradict advice Palm was giving to the public.

Palm said people should not put much stock in the daily COVID-19 numbers from DHS, because they were too unreliable. She said the weekly averages provided a much more accurate picture of COVID activity in the state. Unfortunately, the BBB’s criteria were based on the daily numbers. Palm dropped hints that the criteria didn’t matter much anyway. Wisconsin would stay closed until everyone was vaccinated.

Many of Palm’s problems came from her department’s inability to manage COVID data. She clearly had no understanding of the numbers or methodology herself.

The more problems DHS had with COVID data, the more problems Palm had explaining them. She was unable to explain why thousands of negative test results were not being reported.

DHS, and Palm, initially put a strong emphasis on the number of days it took for the number of COVID cases in Wisconsin to double. They used those projections to justify the lockdowns, until MacIver discovered DHS lied about (or didn’t check) the doubling rate when unveiling those policies. That’s about the time they stopped talking about the doubling rate.

Andrea Palm calls @MacIverWisc study a lie, but can’t explain why @DHSWI is now following the study’s recommendations. Why is DHS posting data that Palm say is a lie? #WIright pic.twitter.com/IpJYYKWsBc

.@DHSWI‘s Andrea Palm says she never told lawmakers Safer-at-Home could last six months, but she says government management will last until there’s a vaccine or other intervention – at least six months. #WIright pic.twitter.com/s5AalziqGT

These gaffes and lies all pointed to one inescapable conclusion: Palm was in way over her head and never had a real plan address the state’s public health challenges. She pointed whichever way the political winds were blowing, unable to provide any acceptable rationale for her decisions.

When Evers issued the first mask mandate, DHS could not explain what results the administration hoped to achieve with the policy.

.@DHSWI admits it does not have a specific goal for what it wants to accomplish with the statewide mask mandate. #WIright #COVID19 pic.twitter.com/eKUq7O59lG

For weeks she insisted that Wisconsin hospitals were overwhelmed with COVID patients, but that didn’t explain why the overflow center in Milwaukee was empty.

Palm wasn’t just a disaster in public. There were strong indications that her presence was just as damaging behind the scenes. Under her leadership, three top DHS officials quit during the public health emergency. Rumors spread of toxic leadership at the top.

One of DHS’ most glaring failures during the COVID crisis came to a front in January. The CDC reported Wisconsin ranked 40th in the nation in its vaccine rollout. Half of the doses provided to Wisconsin had not yet been administered, and DHS still hadn’t completed its priority lists for who could be vaccinated and when. The Evers Administration insisted it was all Trump’s fault.

The only thing unfortunate about Palm’s departure is its timing. Any improvement in Wisconsin’s performance in addressing COVID-19 will undoubtedly be attributed to end of the Trump Administration. Meanwhile, Palm will get everything she wanted – a high paying federal position well out of the limelight – and a clean break from all the damage she did in the Badger State.