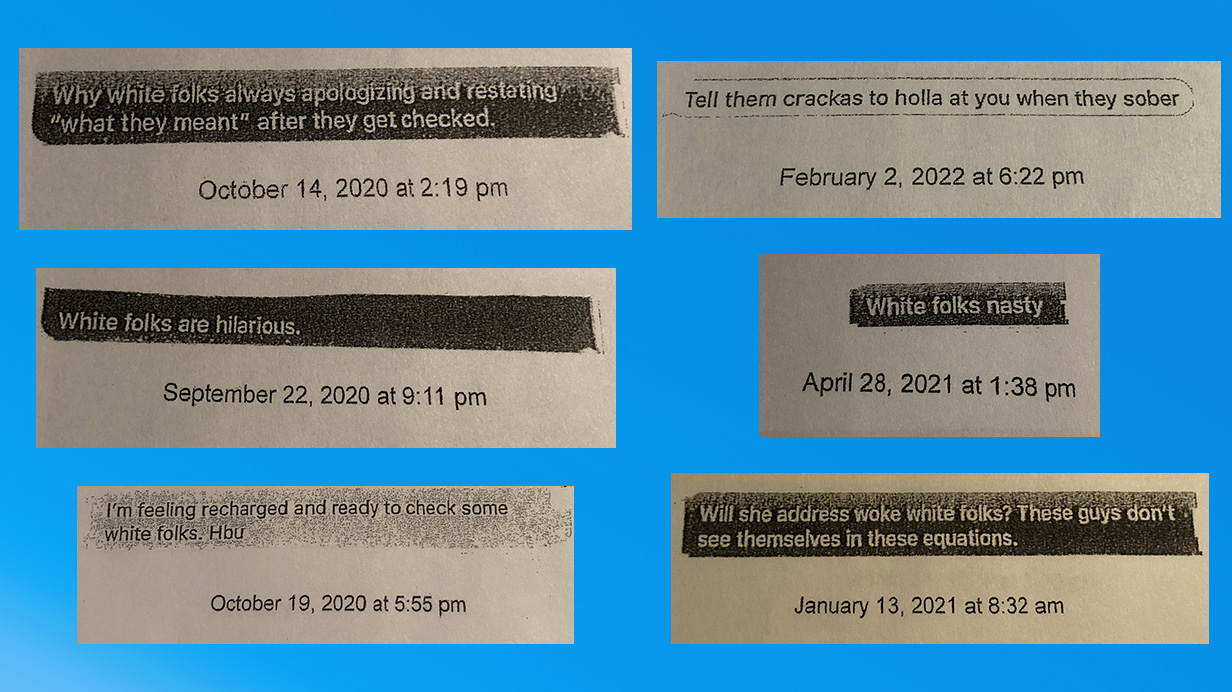 After exchanging racist messages for months, Shorewood School District administrators tried to claim they were the real victims of racism, a MacIver News Service investigation has learned.

“The text messages in question are clearly reactions to the unfair treatment and harassment that I and some of my Black colleagues have been subject to as employees of Shorewood School District by our White colleagues and community members,” Director of Curriculum and Instruction Sam Coleman wrote in an Aug. 15, 2022 statement.

Never mind that Shorewood is one of the most liberal communities in Wisconsin. Joe Biden won 85% of the vote in the village in 2020. Coleman says that reputation is misleading.

“The community and school district hides behind the disguise of liberal progressiveness while tolerating and perpetuating racial aggression, harassment, and discrimination toward Black people,” he claimed.

The district learned about all of this because Coleman, Atwater Elementary Principal Tammy Rasco, and others had been using their district-issued phones to send the racist text messages. They did not know that those phones were tied to their district-issued laptops through their iCloud accounts. The district’s tech department discovered the messages on one of those laptops that was brought in for maintenance.

Communications done on a government owned phone, computer or other device is subject to the open records law and is not private communication. The MacIver Institute filed an open records request for the racist text messages on that laptop, which began in Sep. 2020. The request also included Coleman’s and Rasco’s official statements they wrote in Aug. 2022 in which they attempted to turn the tables on the school board.

“There is a documented pattern of racial aggression I have endured at the hands of the Shorewood Education Association and its leadership and of numerous other Shorewood School District Directors and Staff,” Rasco wrote. “The board and the District Administrator(s) knowingly and willing failed and refused to act in a meaningful or substantial way to address and/or prevent this racially hostile and discriminatory treatment I endured.”

She claimed the text messages addressed those issues. The text messages that MacIver acquired through the open records request, however, don’t show any indication that Rasco was on the receiving end of any discrimination. Instead, text messages included comments like:

Coleman’s assertion that the text messages addressed his mistreatment in the district also seems suspect. The text messages MacIver acquired paint a much different picture.

Both Coleman and Rasco cited Title VII of the Civil Rights Act of 1964, which requires workplace nondiscrimination policies, and claimed the district did not enforce those.

“The Board and Superintendent acknowledged but failed to enforce any policies pertaining to the unlawful discrimination and racially motivated hostile treatment toward Black staff,” Coleman wrote.

Coleman’s rapid rise to the top level of district leadership undermines this claim. He was hired as the Shorewood School District’s first director for equity in 2018. It wasn’t long before he was promoted to director of curriculum and instruction. He immediately began transforming the school district to focus on social justice and anti-racism with the full support and cooperation of the superintendent.

“I think the priorities really speak to the community’s awareness and readiness to confront the way our curriculum has worked for a normed group and has left out a vast range of identities and perspectives and experiences. It was powerful for the participants to acknowledge this and admit that Shorewood has a very homogeneous, euro-centric educational approach that’s not healthy for any student,” Coleman said at the time.

Less than two years later, Coleman was expressing a very different opinion of the district and community.

It’s hard to imagine a school district doing more than Shorewood to address racism. Teachers go through a six-module professional development course all about equity. The district also has sponsored a “Youth Rising Up” club for over five years dedicated to combating racism, it offers special scholarships for minority students, and it makes a special effort to hire racially diverse staff. It even picks school plays based on their anti-racist messages like “Hairspray” and “To Kill a Mockingbird” (a play later determined to actually be racist).

Regardless of these efforts and Coleman’s professional success, he and others still saw racism everywhere.

“White folks don’t like reporting to black folks. As the Director of C&I, you are basically Asst Supt. They. Can’t. Stand. That.” Rasco wrote to Coleman on Oct. 15, 2020.

Ironically, it was the district’s nondiscrimination policy that eventually landed the administrators in hot water.

“Prohibited national origin harassment occurs when unwelcome physical, verbal, or nonverbal conduct is based upon an individual’s national origin and when the conduct has the purpose or effect of interfering with the individual’s work performance; or of creating an intimidating, hostile, or offensive working environment. Such harassment may occur where conduct is directed at the characteristics of a person’s national origin, such as negative comments regarding customs, manner of speaking, language, surnames, or ethnic slurs ,” according to the district’s policy.

Using words like “Cracka” and “White Folks” is also considered to be “deficit-based language,” which also goes against the district’s equity policy. And so, the tech department director handed the laptop over to the interim superintendent. The district launched an investigation, which wrapped up in August. In response, Coleman and Rasco doubled down.

“Frankly, it is none of White people’s business what Black people talk about in private unless their concern involves dealing with the racial aggression and harassment that other White people perpetuate or allow,” Coleman asserted on his government phone.

“Frankly, it is none of White people’s business what Black people talk about in private unless their concern involves dealing with the racial aggression and harassment that other White people perpetuate or allow,” Coleman asserted on his government phone.

For the most part, it appears that the school district agrees with these claims of widespread racism in the community. In a Feb. 2021 memo, the school board stated there is a pattern of racism, microaggressions and hostility towards black staff members. The school board promised to try and do better in its commitment to anti-racism.

“What we can say is that over the past eight years, black and brown students, families and staff have expressed their pain and frustration with implicit and explicit racism in the district and Shorewood,” School Board President Paru Shah stated. “We are committed to creating anti-racist work and educational spaces. And, we are committed to supporting our staff and faculty of color.”

And yet, despite all the district’s equity and anti-racism initiatives, professional development, programs, and policies so far – Shorewood has become one of the most racist communities in the state, according to the administrators’ accusations and the School Board’s own admissions.

Since the investigation began, both Coleman and Rasco have left the district. Rasco left for health reasons caused by the trauma of her racist messages being exposed. Coleman is now working for the Integrated Comprehensive Systems for Equity (ICS), while he pursues his PhD in Education focusing on “the experiences and impacts of school and district administrators who leverage their leadership to eliminate systemic racial inequities.” ICS is responsible for developing and promoting CRT curriculum used around the state.

The tech director who brought all of this to the Superintendent’s attention has been fired, and he’s now suing the district for wrongful termination.

The district did take one concrete step to ensure nothing like this ever happens again. It stopped using iCloud. 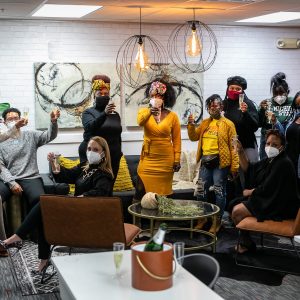