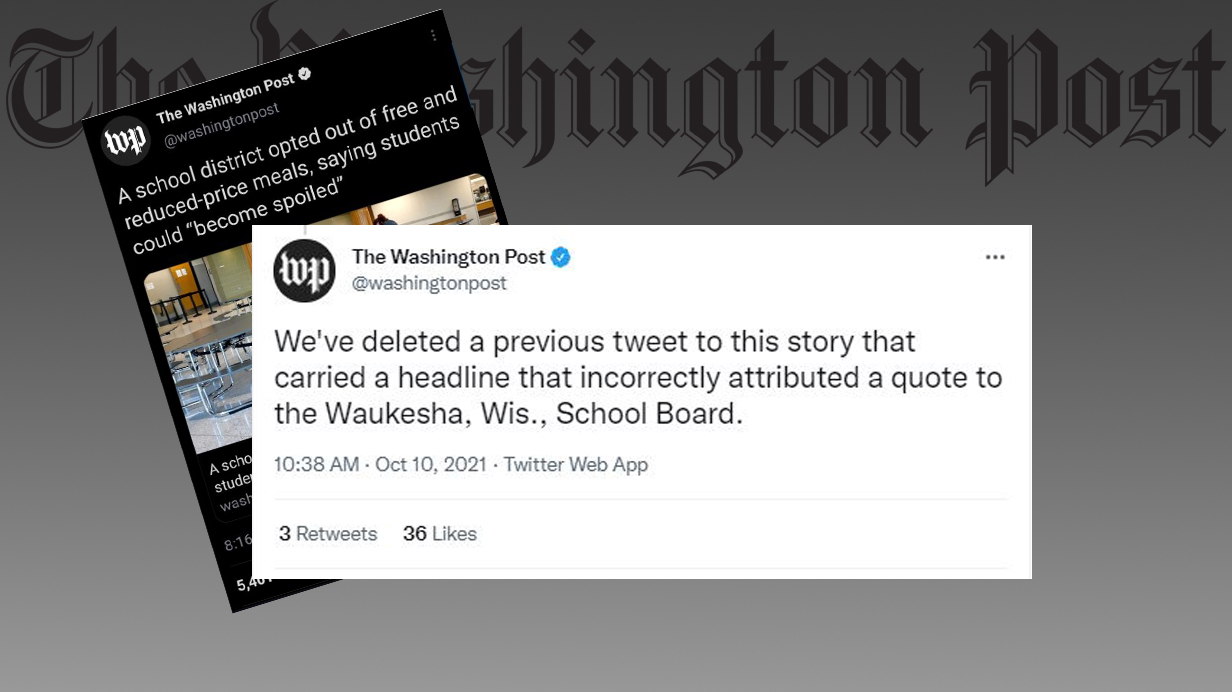 In an exclusive report, Dan O’Donnell outlines how the Washington Post finally apologized (sort of) for a story that sparked hundreds of death threats against Waukesha School Board members.

The “Drive-By Media,” the late Rush Limbaugh famously explained, is—when it comes to killing reputations, at least—very much like a drive-by shooter.

“They come in with their cameras and their microphones and their news reporting, and they create an absolute mess,” he explained.  “They scare the hell out of people.  They literally cause carnage.  Their actions sometimes are destructive and ruinous to individuals.  They kill the reputations of people or try to.

“And then they get in the convertible, they head on down the highway and they find the next group of people to do the same thing to.”

Never before has that description been more apt than in Waukesha, where a hail of willfully dishonest reporting from the Washington Post has bloodied an entire community.  Only now, a month and a half after the dust settled and reputations and livelihoods lay dying in the streets, has the Post admitted to its heinous duplicity.

This week, it finally issued a correction to a patently false story that led to hundreds of threats against members of the Waukesha School Board.  A month and a half after the damage was done, the Drive-By Media finally backed up the convertible to survey the aftermath. 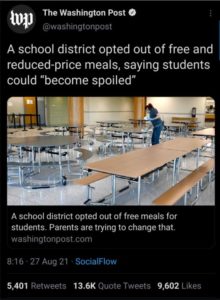 In June, the Waukesha School Board voted to leave the federal government’s Seamless Summer Option program, which provides no-cost meals to students during the summer months regardless of their family’s income.  During the COVID-19 pandemic, when hundreds of thousands of parents lost their jobs, the government extended the Seamless Summer Option into the school year.  For the duration of the 2020-2021 term, parents did not have to pay for their children’s school lunches.

A majority of the Waukesha School Board, however, felt that this was unnecessary as parents returned to the workforce ahead of the 2021-2022 school year.  In a relatively uncontroversial vote, the board moved to return to the National School Lunch Program, in which no-cost meals are available only to students from low-income families.

When the Post learned of this in late August, though, it accused the board of being utterly heartless, even quoting a member as saying that “students could ‘become spoiled’” by all the free meals.

“A school district opted out of free and reduced-price meals, saying students could ‘become spoiled,’” the Post tweeted as it linked to a story about the controversy by reporter Maria Luisa Paul.

“Karin Rajnicek, a school board member, said the free program made it easy for families to ‘become spoiled,’” she wrote.

The response was as swift as it was savage.  Thousands of outraged liberals retweeted the Post, screaming obscenities at the callous board members who believed a free lunch could spoil them.

Hers was just one of hundreds of similarly indignant missives from the most prominent liberals in America, and they inspired an onslaught of vile threats.

“I hope you and your children choke and die,” wrote one man.

“You’re about to get ruined,” added another, who included each board member’s home address in his email.  “All of you.  Targeted.”

And they were; with death threats, one-star Yelp reviews of their businesses, and with the knowledge that if they didn’t reverse their decision, the hate might never stop.

Three days after the Post’s story was published—and after three days of nonstop harassment—the board called an emergency meeting and re-entered the Seamless Summer Option.

The hate emails ceased, but the story that sparked them was a complete and total lie.

Rajnicek never actually said that students would become spoiled by free lunches.  While speaking ahead of the board’s decision to exit the Seamless Summer Option, she wondered aloud whether she and other upper middle-class parents like her might unfairly take advantage of a program for low-income families that was never intended to include them. During a school board meeting in June, she raised the possibility that she and other parents like her who could easily afford to pay for lunches for their children would become spoiled by taking advantage of a program that was never intended for upper-income families.

“Can we just get back to, ‘If I have children, I should be able to provide for them and if can’t, there is help for them?’ Stop feeding people who can provide for them,” she said.  “I feel that this is a big problem.  And it’s really easy to get sucked into and to become spoiled and to think it’s not my problem anymore.  It’s everyone else’s problem to feed my children.”

The Post never included this context in its original story and deliberately misquoted Rajniceck in both its tweet and headline, and as a result she bore the brunt of the hatred from outraged liberals, who review-bombed her salon for days on end.

“The woman who owns this place voted against free lunches for schoolchildren because she said it would make them ‘spoiled,’” one Google reviewer wrote.  “That’s right, this woman thinks feeding a child will make the kid feel ‘spoiled.’  She’d rather CHILDREN go hungry at a place they’re forced to be at (school).  A horrible woman.”

Rajnicek reached out to the Post for a retraction of the dishonest story but was ignored for more than a month.  This week, however, the Post’s general assignment editor, Keith McMillan, emailed Rajnicek back to inform her that at long last the dishonest reporting would be retracted.

“While we cannot retract a story that remains mostly correct as printed, we did recognize that there was nuance in your comments that we missed,” he wrote.  “We have written a new headline, appended a correction to the story and deleted the original tweet, sending a new tweet to explain why.”

The Post’s Twitter account announced that “we’ve deleted a previous tweet to this story that carried a headline that incorrectly attributed a quote to the Waukesha, Wis., School Board,” and the headline was changed to “A school district briefly opted out of a free-meals program, citing a desire to return to a pre-pandemic ‘normal.’”

A lengthy correction was added that reads:

An earlier version of the article had a headline that incorrectly attributed the statement that students could “become spoiled” by a free-lunch program to the Waukesha, Wis., school board. The article also misrepresented the remarks of Karin Rajnicek, who made the statement. The article has been corrected, and a quote contextualizing Rajnicek’s comment has been added. The article was originally published Aug. 27. On Aug. 30, the school board rescinded its decision and voted to use the federal Seamless Summer Option program through the 2021-2022 school year.

The updated story, of course, makes no mention of the death threats that resulted from the original reporting, but McMillan seems satisfied with the work his newspaper has done.

‘While it certainly doesn’t undo the harassment—and it happens to our reporters as well, so I empathize—I do hope you recognize this effort to be more precise, regardless of how much time has passed,” he wrote.  “We are sorry for what you have had to endure and the role our missing nuance played in it.”

The Post’s “missing nuance” (more accurately described as “deliberate and malicious dishonesty”) played the only role in the harassment Rajnicek, her fellow board members, and the Waukesha community endured.

Had it reported as honestly as would be reasonably expected from a newspaper whose motto is “Democracy Dies in Darkness,” then it would be highly unlikely that Waukesha would have been as targeted as viciously as it was.

Then again, that’s not really the concern of the Drive-By Media, is it?  Their bullets have already hit their targets.  They don’t really care all that much about stopping the bleeding.