Welcome to another section of the MacIver 2021-2023 State Budget Analysis series. Governor Evers took special interest in the climate change agenda in his budget, and so here we will discuss some of the radical climate change proposals the Governor introduced and what met the Joint Finance Committee’s (JFC) chopping block. We’ll further discuss the Department of Natural Resources (DNR) budget and changes made to the Knowles-Nelson Stewardship program, a government program that has already purchased 1,622,300 acres, worth over $1 billion dollars, of private land for “conservation” efforts.

After the Governor’s Task Force on Climate Change released its radical final report at the end of last year, Governor Evers integrated many of those proposals and initiatives into his 2021-2023 budget proposal. The Joint Finance Committee cut all of these proposals out of the budget early on, which should come as a relief to anyone in Wisconsin who wants the freedom to drive what they want, run their businesses how they like, build their house how they choose, and not see their energy bills artificially skyrocket.

It’s unlikely, though, that Evers will stop here. We anticipate many of his and the Task Force’s expensive climate proposals will come up again in future legislation soon, and that could mean massive increases in your tax and energy bills. According to one Task Force member, the “daunting” price of all of their proposed programs could cost taxpayers “trillions.” So it’s important for you to know some of the wild and expensive initiatives that Evers proposed to achieve his carbon-free energy by 2050 agenda. 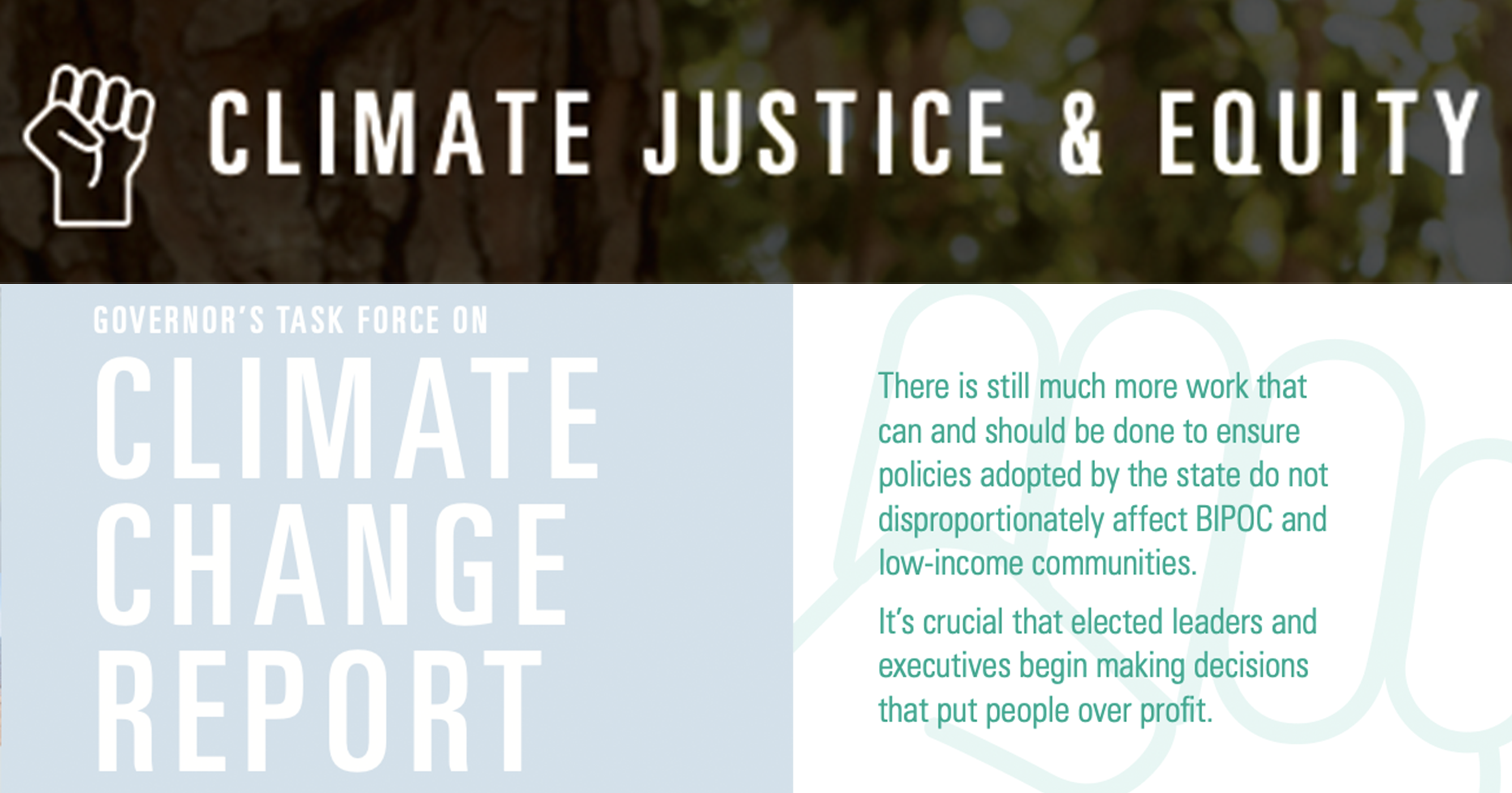 Evers’ plans started with creating an Office of Environmental Justice within the Department of Administration. The Office would have implemented climate risk assessments and resiliency plans at the state and local level across Wisconsin in order to “address the impact of climate change on vulnerable communities.” What exactly are “vulnerable communities”? Low income and minority groups, particularly in urban areas, which Evers and the task force claim, with little evidence, are more severely affected by climate change and environmental issues than anyone else.

While the term environmental justice may not seem threatening, it’s really just another iteration of the Governor’s insidious equity agenda, a concept rooted in Marxism and class division. The idea has been marred by the assumption that people of color and the poor are disproportionately harmed by utilities, factories, and polluters, and so any solution to make the economy more green or address climate concerns needs to focus most on the outcomes of certain races and classes.

One member of Evers’ Climate Change Task Force suggests that environmental justice means punishing companies without proof that they have directly harmed a person or group with malicious intent. The member said that environmental justice requires shifting “the burden of proof to polluters” and eliminating America’s bedrock “innocent until proven guilty” standard for businesses accused of polluting with racist intent. Assuming that a business is guilty until proven innocent is a complete reversal of one of our country’s greatest hallmarks. It’s frightening that a concept like this made it into the Governor’s budget.

Evers proposed some other alarming climate initiatives, including the creation of a “carbon market,” which he gave scarily few details on, restoring eminent domain (AKA: the government taking your land) for bike path development, and requiring a radical climate justice agenda to be included into your kids’ classrooms. All of their classrooms.

Focus on Energy has had two decades to deliver the cost savings that it has promised to the public. During JFC hearings, Senator Duey Stroebel (R-Saukville) found that twenty years of the program still has not brought savings to Wisconsinites’ energy bills. Wisconsin already has some of the highest electricity rates in the nation and Evers’ proposal at the PSC would only increase that rate.

For 20 years Focus on Energy has promised to lower energy costs in Wisconsin. Today, Wisconsin has the second highest energy rates in the midwest. @GovEvers wants to double down on the program. @SenStroebel wants to know when we're going to start seeing those savings. #WIright pic.twitter.com/rqLAaTZaNQ

Evers proposed another crudely expensive policy in his budget that would require the PSC to evaluate the “social cost of carbon” before approving or denying any new utility construction projects. The social cost of carbon, according to Evers’ proposal, “is an estimate of the economic damages that would result from emitting one additional ton of greenhouse gas into the atmosphere.” What exactly is the cost of those estimated damages? Ask the divisive Paris Climate Agreement, which is in control of the highly subjective metric.

Daily Signal writer Kevin Dayaratna describes the metric as “the most useless number you’ve never heard of,” for it’s impreciseness. Dayaratna writes that the metric is entirely dependent on data put into models, and “Assumptions made by modelers can drastically change the purported estimates and thus beef up the damages as much as they want.” In practice, the policy is only there to bludgeon businesses for using carbon-based energy. We’re glad to see it removed from the final budget.

When JFC Co-Chair @SenMarklein pressed PSC Chair Valcq about how "social cost of carbon" is calculated, she admitted that it must be based on "international consensus" from the radical Paris Climate Accords.

JFC won a victory for the taxpayer when they eliminated Evers’ costly climate agenda in the early days of the budget. The Governor’s DNR budget would have cost a massive $219.3 million in GPR and $749,500,000 in bonding. By contrast, the budget passed by the Legislature and signed by Evers cuts GPR spending by $18.2 million over last budget. That comes out to $197.5 million GPR spending at DNR with $114.5 million in bonding.

During the DNR debate in JFC, a big demand of the Democrats was for more state money to replace lead pipes throughout the state, particularly in Milwaukee County. However, as Representative Tony Kurtz and other Republicans pointed out, ARPA funding–federal funds passed by President Joe Biden in response to COVID-19–can pay for lead lateral replacement. Water infrastructure is one of the four accepted outlets that ARPA money can be used for.

Senator LaTonya Johnson (D-Milwaukee) argued that Republicans were passing the buck on lead lateral replacement, yet she failed to mention that City of Milwaukee officials ignored the problem for years, and could fix the problem now with their own ARPA distribution of nearly $400 million.

Evers’ most expensive environment ask was a 10-year reauthorization of the Warren Knowles-Gaylord Nelson Stewardship fund for $700 million in bonding authority, $70 million per year. To put that massive increase into context, the current program authorization allows for $33.25 million in bonding per year. That’s a big boost to a program whose job is to procure private land for the government.

Wisconsin taxpayers have already spent over a billion dollars on state land for government use. A billion dollars. From 2001-2021, Wisconsin has allocated $1,078,859,000 just to pay off the debt service for the Stewardship Program. That debt has allowed the state to purchase over a million and a half acres of land. As of 2020, the Wisconsin State Government has purchased 1,622,300 acres of land through the Stewardship Program alone. 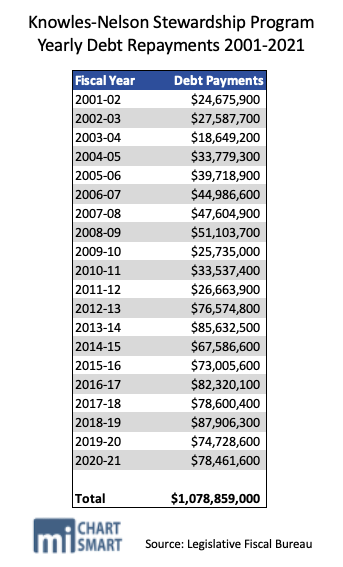 Combined with county and federal government conservation acquisitions, 5,946,900 acres of Wisconsin land are publicly owned. That’s 17.16% of all the land in Wisconsin, just for conservation. That doesn’t include the rest of the government-owned land in the state.

Rather than removing the program, JFC member, Representative Amy Loudenbeck, said JFC would begin work to transition away from it. The budget, however, funds the program at about the same level as in current law. The budget as passed renews the Stewardship program for the next four years with a $90 million bonding authority. The DNR may spend up to $33.25 million per year, same as today, but with $24 million in bonding authority and an $8 million allotment from the conservation fund. While funding for the program remains flat under this budget, JFC did reduce program bonding. We can only hope this will lead to more bonding reductions down the road.

As it stands, JFC, the Legislature, and the Governor did not disclose their end-game for the Stewardship Program–when will the government own enough property? The state keeps buying and buying, with no end in sight or even discussed. Are we done once we hit 18% or 20%? How about 30%? The 2021-2023 state budget regretfully does not have an answer. 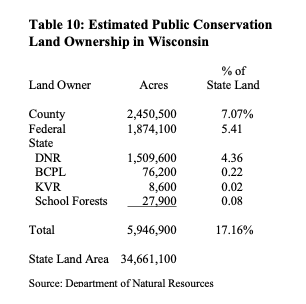 The Governor’s veto pen made several minor changes to the Legislature’s environmental budget items. Money from the state environmental fund was set aside in the budget for four statewide repair and restoration projects. Evers used his line-item veto powers to change the fund source for all four projects from the environmental fund to the conservation fund.

The Governor also vetoed a provision in its entirety to direct the DNR to give a $2 million grant from the environmental fund to the city of New Berlin for a road construction project. Evers delivered the veto because he objected “to directing the Department of Natural Resources to provide grants for road construction projects.” He advised the city of New Berlin to seek the funds from the Department of Transportation instead.

As in other sections of the budget, Evers also vetoed several environment-related budget lapses. He says that he objects to making any budget lapses “when the state is in a strong fiscal position.” Makes sense for Tax and Spend Tony to veto even small roll-backs of government spending wherever he could find the chance.