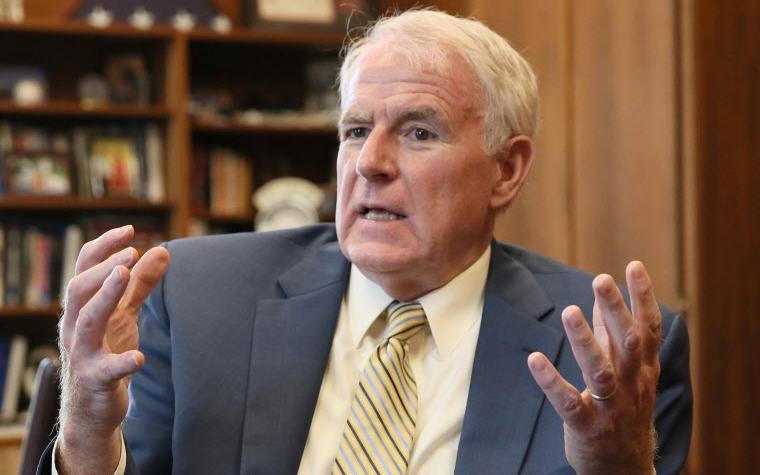 One of the oldest jokes about Wisconsin is that its only two seasons are winter and road construction, but the surest way to tell that Spring has arrived is that Milwaukee Mayor Tom Barrett is condemning violence in his city.

Like February’s groundhog, Barrett emerges once a year to look around and spout a few empty platitudes about too many guns on the streets or young people who are too quick to turn to violence to solve their disputes.  If the Mayor sees a particularly bad shooting, it means six more weeks of cliches.

That’s a joke; he would never actually spend six weeks on the out-of-control violence in Milwaukee.

“We continue to have a serious problem in our community with too many individuals trying to resolve their differences with guns,” Barrett gravely intoned this week after three men were killed and several others injured in three separate shootings less than an hour apart on Friday.

One could be forgiven for the sudden feeling of déjà vu.  Barrett said almost the exact same thing when Milwaukee saw a rash of murders in 2017.

“There were situations where the individuals knew each other and decided that they were going to resolve whatever their dispute was with a gun,” he lamented.

So robotic is the reaction, so rote is the response that it feels like Milwaukee is stuck in its own Groundhog Day: A perpetual cycle of violence, hollow sanctimony, inaction, and then more violence.

The only time Barrett—or any other city leader, for that matter—seems even remotely interested in actual reforms in response to a homicide is when it is committed by a police officer.

“The image of George Floyd dying is a permanent part of our collective memory,” Barrett said in a news release following last week’s conviction of former Minneapolis police officer Derek Chauvin.  “To move forward, we must understand violence against Black people—and other people of color—is real. And, while rare, there are people in positions of authority who perpetrate that violence. I condemn that.

There have been 49 homicides in Milwaukee since the beginning of 2021, and a staggering 92% of the victims (45 of the 49) were black.  Not a single one was killed by a police officer.

“Here in Milwaukee, we are moving forward with new approaches in law enforcement. We are focused on accountability, evolving law enforcement culture, and increasing community respect.”

If only he would move forward with new approaches to a threat to black lives that is far more pressing than the Milwaukee Police Department.

There have been 49 homicides in Milwaukee since the beginning of 2021, and a staggering 92% of the victims (45 of the 49) were black.  Not a single one was killed by a police officer.

Even though Blacks make up just 39% of the city’s population, they make up nearly 100% of its murder victims.  In comparison, whites comprise 44% of Milwaukee’s population, but there has not yet been a single White murder victim in the city this year.  In addition, 164 of Milwaukee’s 194 non-fatal shooting victims (85%) this year have been Black while only 29 are White.

This staggering disparity has been remarkably consistent for several decades.  In a new study published last month in the Wisconsin Medical Journal, researchers determined that “Wisconsin has the second-highest Black homicide rate in the country, reporting a rate of 37.57 deaths per 100,000 Black non-Hispanic Wisconsinites. Meanwhile, White non-Hispanics experience a homicide rate of 2.0 deaths per 100,000.”

From 2000-2017, the years researchers studied, only heart disease killed more Black people aged 10-64 in Milwaukee than did gun homicides.

This, not law enforcement, is the single gravest threat to Black lives.  Since the Washington Post began keeping detailed data of police shootings across America in the beginning of 2015, officers in Wisconsin have killed 101 people.  All but five of them were armed.  Three of them were Black.  Not a single one was killed in Milwaukee.

There have been a total of 11 Black men killed by law enforcement officers in Milwaukee since the beginning of 2015.  All 11 were armed—nine of them with guns.

During the same time period in which police officers killed 11 armed Black men, 674 Black people have been murdered in Milwaukee by someone other than a police officer.  This is an epidemic, but it has become so commonplace in the city that it is as expected as the changing of the seasons.

Police shootings garner hysterical headlines and impassioned pleas for justice, but the real injustice in Milwaukee, across Wisconsin, and throughout the entire country is that Black people are dying in unprecedented numbers and it is met with a collective shrug.

Sure, there might be a press conference with a cliché or two about how “our community needs to come together to stop this,” but nothing will ever change unless the leaders responsible for the well-being of Black lives understand the real threats to them.