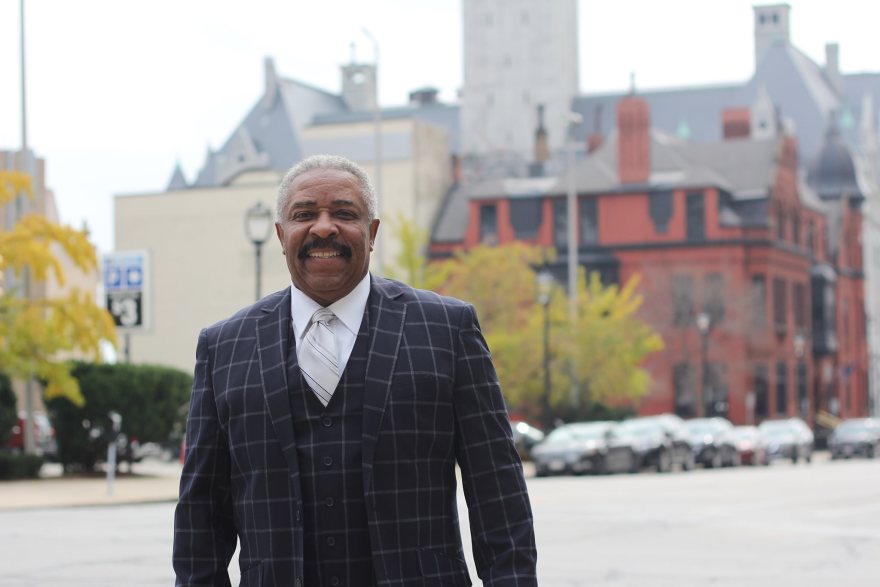 Milwaukee City Attorney Tearman Spencer has been violating the city’s anti-harassment policy since the moment he took office last year.  Will he get away with it?

To hear Milwaukee City Attorney Tearman Spencer tell it, he’s just a cheerful, friendly guy.  He readily admits to calling female employees “sweetheart” and “dear,” complimenting them on their looks, and asking about their families.  Sure, he’s a little old fashioned, but really, what’s the harm in that?

A Department of Employee Relations investigation into his conduct, though, has determined that he has been harassing subordinates since the moment he took office after being elected last April.

“At least six employees have individually complained about Mr. Spencer, and there are several others who have witnessed the behavior,” investigator Katherine M. Holiday determined.  “Among such concerns are several incidents of potentially offensive/discriminatory verbal comments and behavior, as well as one incident of unwelcome physical contact with a female colleague.”

That incident, Holiday concluded, occurred when “one female employee reported that she was physically touched on her body by Mr. Spencer.”  Holiday did not elaborate, but such unwanted physical contact would appear to violate the City of Milwaukee’s anti-harassment policy.

“As an elected official, the City Attorney is not bound by the Anti-Harassment Policy,” Holiday rather laughably concluded.

So too would the “alleged hostile work environment” that Spencer created by giving “work to men instead of women without an apparent or legitimate reason to do so,” assigning men to oversee women on projects/cases/assignment or to review women’s work when the men had considerably less experience in that area than the female,” and in meetings refusing to “give females’ opinions the same consideration as men’s opinions.”

This appears to be a direct and serious violation of the City of Milwaukee’s Anti-Harassment Policy, which mandates “a work environment that is free from sexual harassment and harassment or discrimination based upon…gender identity.”  As such, “harassment based upon any protected category is not tolerated.”

Holiday’s investigation determined that Spencer’s conduct did indeed rise to the level of harassment, as his “comments based on gender, gender identity, physical appearance, and body and body parts, and touching are not appropriate workplace behavior.”

“As an elected official, the City Attorney is not bound by the Anti-Harassment Policy,” Holiday rather laughably concluded.  This is the same Milwaukee whose mayor (John Norquist) left office in disgrace after settling a sexual harassment suit, right?  Its harassment policy couldn’t possibly exclude elected officials, could it?

Remarkably, it does, officials confirmed to the Milwaukee Journal Sentinel.  The only way for Spencer to be punished at all for his seemingly rampant harassment is through a recall election or by removal from office by the Milwaukee Common Council.

Wisconsin Statute § 17.12 requires a three-fourths vote of the Council, and elected officers can only be removed for “cause,” which is defined as “inefficiency, neglect of duty, official misconduct, or malfeasance in office.”

Clearly, fostering a hostile work environment through near-constant belittlement of and disregard for women constitutes both a neglect of the duty of said office and official misconduct, but it is sadly probable that Tearman will never be removed from office.  One shouldn’t even hold out hope that the Common Council will even investigate, which under Wis. Stat. § 17.12 would allow Milwaukee Mayor Tom Barrett to suspend Spencer pending its outcome.

He is simply too politically protected.  A close ally—and rumored paramour—of Wisconsin Congresswoman Gwen Moore, it is almost unthinkable that 12 of Milwaukee’s 15 Common Council members would vote to remove him.  And does anyone really believe that Mayor Barrett would be brave enough to deal with the fallout from suspending Milwaukee’s first black City Attorney after just a year on the job?

Of course not, even though Spencer’s first year in office has been an utter disaster.  In June, he earned the ire of the Milwaukee Police Department after dropping curfew violation tickets officers wrote during rioting over the death of George Floyd.  Earlier this month, he refused to sign a contract allowing the long-stalled Couture development to finally move forward.  And just a few days later, he defended a deputy attorney’s conflict of interest when that deputy served as a defense attorney for a man tried for sexually assaulting a child.

To be sure, Spencer has ruffled his fair share of feathers in City Hall, but he still seems to have the support of the power players who matter.  Does this mean that he will get away with a year’s worth of harassment?  Does this mean that the Democrats who control Milwaukee will actually tolerate behavior that they publicly profess to abhor?

The evidence of his mistreatment of women is overwhelming, yet because of Milwaukee’s ridiculously self-serving refusal to include elected officials in its Anti-Harassment Policy, his fate is in the hands of a Common Council and Mayor who don’t seem particularly likely to hold their friend to account.

And, most importantly, does this mean that its City Attorney is quite literally above the law?