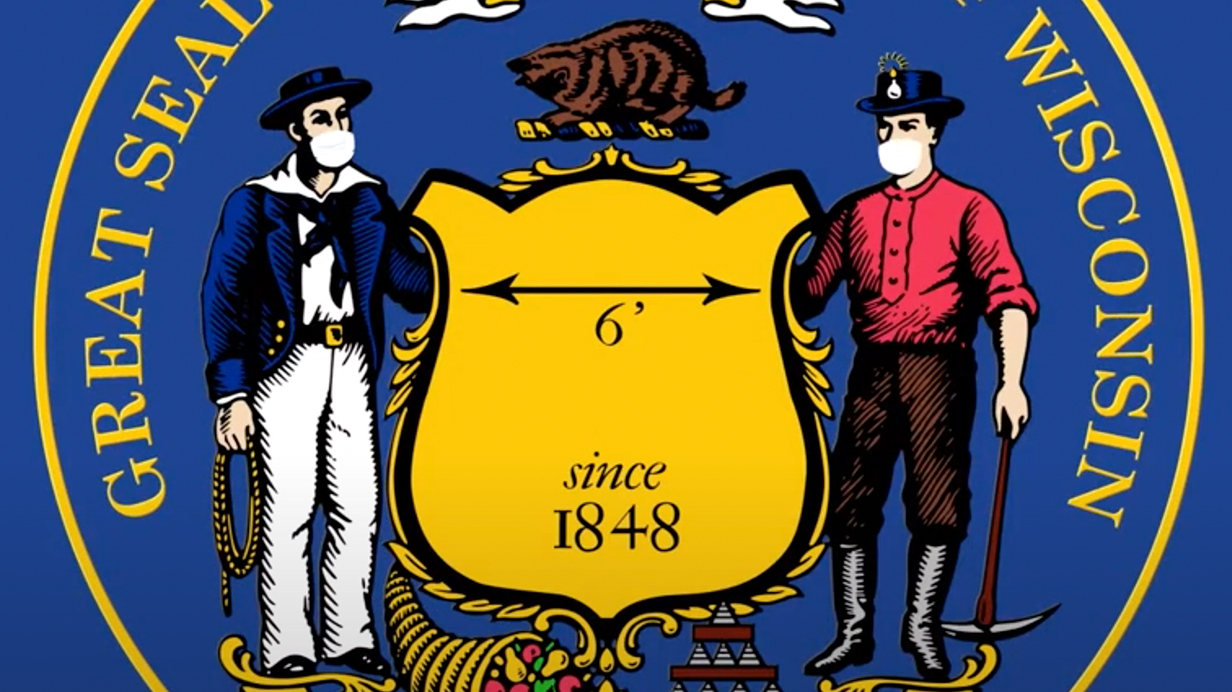 No matter what the metrics actually say, Gov. Evers always says the situation is dismal – and Palm drops a clue that masks won’t be their last big idea.

Gov. Tony Evers surprised reporters on July 7th during his first press conference after the Fourth of July holiday weekend. He and his staff were wearing face masks on camera for the first time.

Wisconsinites had ignored Evers’ instructions not to celebrate Independence Day with their family and friends. He wanted people to take COVID-19 more seriously.

“That means wearing a mask whenever you go out in public,” Evers said.

Reporters probed, seemingly demanding at times, when the governor would issue a statewide mask mandate. The governor regretfully said that wasn’t possible. If he could, he said he wouldn’t hesitate.

Throughout the public health emergency, Gov. Evers has insisted he’s following the science. Oftentimes that means doing whatever the CDC says. Unfortunately, even the CDC comes up empty when it comes to the science behind the masks. That’s not stopping it from pushing face masks all the same.

No Data, No Problem at the CDC

The CDC, by its own admission, has no laboratory evidence that face masks can protect you from COVID-19.

“Laboratory studies will be difficult and costly because they require capacity to safely manage this biosafety level 3 pathogen,” three CDC physicians wrote in the Journal of the American Medical Association (JAMA) in July.

“In the absence of such data, it has been persuasively argued the precautionary principle be applied to promote community masking because there is little to lose and potentially much to be gained.”

And so, the CDC turns to an online public opinion poll and a couple of anecdotes to support this public policy recommendation.

The CDC, by its own admission, has no laboratory evidence that face masks can protect you from COVID-19.

The CDC supports mask, in part,  becuase the public is becoming more agreeable to wearing them. One internet survey in early April found 61.9% of adult respondents wore a face mask in public. It surveyed a different group of people a month later and found 76.4% of them wore a mask. Few would consider an online survey of random participants to be scientific by any means. And yet, it’s good enough for the CDC.

The CDC also points to a hair salon in Missouri. Back in May, two hair dressers had COVID-19 and kept seeing customers, but they were wearing masks and no one got sick from them. Researchers said there were at least four other explanations why they didn’t infect anyone else, but regardless, “the results of this study can be used to inform public health policy during the COVID-19 pandemic.”

The closest thing public health officials have to an actual study comes from Boston’s Mass General Brigham hospital system. Before requiring masks, the rate of infection among its employees reached 21%. Two weeks later, the rate of positive tests among employees dropped from 13.65% to 11.46%. (The rate dropped from 21% to 13.65% before the masks had time to make an impact.) Even though the timing did not line up and there were many other new policies being introduced before and after the mandate, physicians claimed masks were the X-factor.

Lacking scientific evidence to support the premise that masks can block COVID-19, the CDC relies on assumptions. If the virus only travels on water droplets, and masks block water droplets, then masks can block COVID-19. Mathematically, these experts insist, that if masks block 60% of the virus and 60% of the population wears masks, the virus will not be able to spread fast enough and will die out. Any challenge to these beliefs is dismissed as a strawman fallacy.

Masks Pick Up Steam in Wisconsin

Gov. Evers never wore a mask at his press conferences until Jul. 7th, but he told the public that they should as far back as May 27th.

“One of the most important things you can do to help others is to wear a mask or other face covering in public,” he said. “Wearing a mask shouldn’t be a political statement. It isn’t controversial and it is not hard to do.”

Gov. Evers never wore a mask at his press conferences until Jul. 7th, but he told the public that they should as far back as May 27th.

However, Evers had no scientific data to back up his recommendation, because there isn’t any. And despite his insistence, masks were – and continue to be – very controversial.

Politico published an editorial on May 1st titled, “Wearing a mask is for smug liberals. Refusing to is for reckless Republicans. Welcome to Washington’s latest partisan standoff.” With the battle lines drawn, the left’s push for mask mandates intensified.

Menards was one of the first retailers to require all customers wear a mask starting on May 1st. Slowly, most major retailers enacted their own policies. Walmart, Target, Walgreens, Best Buy, Costco, Home Depot, Kohls, Macy’s, Starbucks, Trader Joe’s, Farm and Fleet and Woodman’s all enacted mask requirements by the end of July.

During Evers’ semi-regular press conferences, reporters badgered him about when there would be a statewide mandate. Evers assured them if he would order one if he thought he could get away with it.

.@GovEvers gets bombarded with questions (and suggestions) about mask mandates from reporters at today's #COVID19 press conference. #WIright pic.twitter.com/r5N1ybwvc1

“I know folks have asked about a statewide mask order, and that’s something we’re looking at,” Evers said on July 23rd.

What public officials hope to accomplish with a mask mandate is a complete mystery. Neither the governor nor DHS has provided any measurable goals tied to a mask order.

When Social Distancing Was Key

When the public health emergency began in March, the Evers Administration focused on one specific goal – preventing hospitals from getting overrun with COVID-19 patients. That was the reason Evers issued his shelter in place order, Safer-at-Home, on March 24th.

“Social distancing is the only effective means of slowing the rate of infection,” according to the Evers Administration in March.

Safer-at-Home would work, the administration believed, because social distancing was a silver bullet.

“Social distancing – the practice of keeping at least six feet apart from others and avoiding direct physical contact – is the only effective means of slowing the rate of infection,” the order states.

The order banned all non-essential travel and activities in the State of Wisconsin. In order to sell the public on this imposing (and ultimately unconstitutional) demand, the Department of Health Services (DHS) emphasized certain metrics.

To grab people’s attention, DHS talked about a potential explosion in new cases and deaths. On March 24th, Sec-Designee Palm predicted up to 1,500 deaths and 22,000 new cases within the next two weeks without Safer-at-Home.

Safer-at-Home was in place from March 24th to May 13th. The number of new cases in Wisconsin continued to grow during that time. Ironically, after the lockdown ended, new cases began to tick down for the next few weeks.

As for the original goal of preventing hospitals from getting overrun – that was never a realistic possibility.

#COVID-19 hospitalization numbers in Wisconsin are currently zigzagging. They're still well below the daily peak of 423 on May 29th, and that's well below the state's hospital capacity of about 11,500 beds. #WIright pic.twitter.com/P3k4HyL38r

The average number of daily #COVID-19 hospitalizations in Wisconsin have been declining since May. pic.twitter.com/kQMfbLapkE

Regardless, the Evers Administration continued its crisis narrative.

After the State Supreme Court ruled Safer-at-Home was unconstitutional, Gov. Evers accused them of throwing the state into chaos.

By that time, he had already adopted a new strategy anyway.

“Testing is fundamental to our ability to box in this virus,” DHS Sec-Designee Andrea Palm explained on May 27th. “At a community level, testing and contact tracing tells us where to look for more infections, and that tells us where to send needed resources to help stop the spread.”

Following this strategy, Wisconsin lab capacity exploded. On April 1st, labs only processed 1,643 tests. On June 3rd, they processed 16,451, the most ever in a single day.

One of the natural effects of more testing was finding more cases of the virus. That made the percentage of positive tests an important metric – one that never grabbed many headlines.

In May, the rate fell from 9.16% to 6.85%. It fell despite the state reopening on May 13th. By the end of June, it fell to 5%. Even with higher case totals reported in July, and local governments dragging their feet in reporting negative test totals, the rate only increased to about 5.5%.

The total percent of positive #COVID tests indicate the current intensity of the pandemic. Watching that rate change over time helps us understand if the situation is improving or getting worse. Here’s how the total rate has changed in Wisconsin since April. #WIright #tcot pic.twitter.com/qhswwSPAiw

Meanwhile, the State of Wisconsin hired a small army of contact tracers to map out the social network of everyone who tests positive for COVID-19. DHS started hiring contact tracers in March. Officials expected them to get very busy after the April 7th Spring General Election.

“Despite efforts to protect the public by moving to postpone in-person voting on April 7, the Supreme Court ruled against that request and the elections were held on Tuesday,” according to an April 9th press release. “DHS and local public health officials are monitoring this situation and expect to see any cases from exposure on April 7 begin to appear next week.”

Despite DHS’ dire predictions, there was no election day-related surge in Wisconsin. Contact tracers in Milwaukee only found 7 people who tested positive for COVID-19 they believe was tied to the election.

The Evers Administration no longer provides predictions or goals. They spend more time talking about what they’re doing and want to do than what they want to achieve.

“Testing is the key to isolating those who might have been exposed, reducing the spread, and boxing in this virus,” Evers said on July 7th.

What does “boxing the virus in” mean? Apparently nobody knows.

Under Evers’ Badger Bounce Back plan, the state would be on the brink of reopening (that is had the State Supreme Court not struck down his unconstitutional lockdown).

Under Evers’ Badger Bounce Back plan, the state would be on the brink of reopening.

DHS continues to maintain Evers’ “Badger Bounce Back” dashboard on its website. Most of the trends it reports look promising. COVID-19 related emergency room visits went from 246 on July 10th to 142 on July 23rd, flulike illnesses are down slightly, and the rate of positive results has declined over the past 14 days. All Wisconsin hospitals say they can treat all patients without crisis standards of care and have the means to test all their symptomatic staff. The only trend going up is the number of healthcare workers with positive COVID-19 tests. (The quick reference “Green Light – Red Light” indicators do not seem match the data trends.)

“Wearing a mask or a cloth face covering, practicing good hand hygiene and maintaining physical distancing can help, but these actions do not eliminate the risk,” Sec-Designee Andrea Palm said on July 7th.

This begs the question, what will they demand people do next? Despite many encouraging metrics, the Evers Administration insists the situation is bleak.

“The numbers we’ve shared lately are high, and I know it can feel unsettling to hear we are in the midst of a surge. However, this data also shows us that staying at home worked. We flattened the curve, and we’re slowing the spread, and we can do it again,” Palm said on July 7th.

Someone needs to remind the administration the “curve” refers to hospital capacity – and that’s been flat since day one.