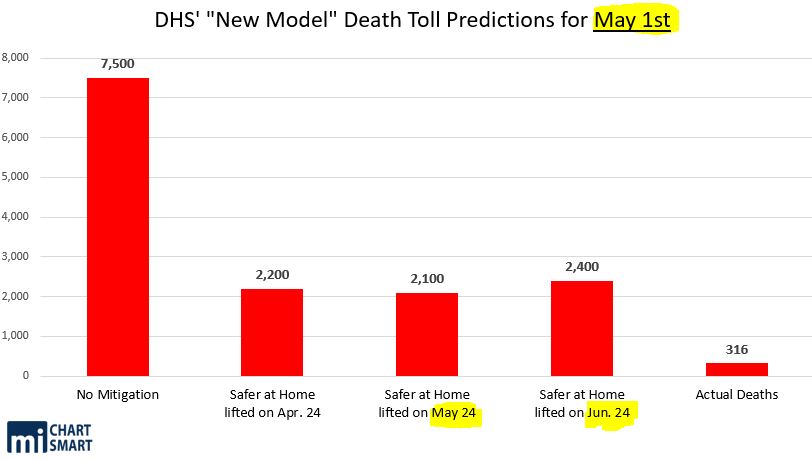 Claims 160,000 more people could become infected if Safer at Home goes through June instead of ending in May

DHS admits there’s no accurate method to forecast the outbreak

The Wisconsin Department of Health Services (DHS) hopes its “new” COVID-19 model will convince the State Supreme Court that Safer at Home should be extended indefinitely. However, the May 1st predictions made by the new model are already proving to be wildly off the mark.

The state legislature is suing DHS Secretary-Designee (SD) Andrea Palm for exceeding her authority by extending Wisconsin’s public health emergency – and the governor’s emergency powers – indefinitely. In a legal brief filed by the Evers Administration, DHS says its new model shows catastrophic consequences if the state reopens too early.

“There is no quantitative method for forecasting the COVID-19 outbreak over a six-month period; the JHU-IDD report states that its collection of scenarios is ‘not a forecast,’” according to the DHS document.

DHS’ results show Wisconsin’s death toll could have reached 43,200 by July 1st if the state did nothing about coronavirus. It predicts that no matter what strategies or measures the state enacts, Wisconsin’s death toll could reach 8,900 by the end of the year. The number of infections range anywhere from 849,100 to 3,271,300. (Back on Mar. 24th, Palm predicted, supposedly using a different model, that the state would see between 440 -1,500 deaths by Apr. 8th without Safer at Home.)

DHS told the State Supreme Court that these results led state officials to decide to extend the Safer at Home order beyond Apr. 24th.

“As March [April] progressed, and the expiration of Safer-at-Home approached, the available data showed that lifting Safer-at-Home after one month would have led to a renewed surge in cases that would have overwhelmed the State’s hospital system, especially given the still-developing ability for Wisconsin to carry out effective containment strategies,” DHS explained to the Supreme Court.

DHS failed to mention in its filing with the court that also according to the new model, Wisconsin’s hospitals would be overwhelmed by mid-April no matter what the state did or failed to do.

Incredibly, DHS’s document that included these disproven predictions for April is dated April 24th. The other predictions run from May 1st to Dec. 30th.

Also – reality check – on the morning of May 1st, Wisconsin’s death toll was at 316 nowhere close to the 2,000 plus under this new model.

Another aspect of the JHU-IDD model that does little to support Evers’ restrictions is that it shows Wisconsinites will not necessarily be safer the longer they stay “Safer at Home.” Not only could 300 more people die on May 1st if the order is extended from May to June, but there could also be 160,000 more infections by Sep. 1st. It seems counterintuitive, but the model’s creator from Johns Hopkins says don’t read too much into that.

Yes, the new model makes backwards predictions, claiming government decisions made in June can retroactively affect the death toll for May 1st.

“There is no quantitative method for forecasting the COVID-19 outbreak over a six-month period; the JHU-IDD report states that its collection of scenarios is ‘not a forecast,’” according to the DHS document.

And yet, DHS officials presented this model to the State Supreme Court as an indication of things to come.

“Johns Hopkins University’s analysis shows that ending the Safer at Home order prematurely would produce a large peak in cases requiring hospitalization that exceeds current capacity. If the order is lifted and not replaced with a (still developing) containment strategy, the DHS modeling data suggests that peak hospitalizations in Wisconsin could exceed 25,000 patients during the summer—far exceeding capacity,” DHS wrote in its legal defense.

In its report on the JHU model, DHS acknowledges its numbers are far more alarming than other widely used models like those from the Institute for Health Metrics and Evaluation (IHME). According to that model, Wisconsin reached its peak need for hospital resources on Apr. 11th, and the state’s death toll peaked on Apr. 5th.

It is important to note that those independent calculations are not publicly available.

It is also important to note, again, JHU-IDD’s predictions for May 1st have been disproven as of today – May 1st. The JHU-IDD model predicted a possible May 1st death total of 1,600 – 7,500. IHME predicts 336 will ultimately die of coronavirus in Wisconsin. The actual numbers show a death total of 316 on the morning of May 1st. DHS insists this is no time to relax the shelter-in-place order and reopen Wisconsin.

“Given that the result of under-estimating cases is more Wisconsinites losing their lives, it seems prudent to be cautious,” DHS states.

Even though this second model is already falling apart, DHS needs it because the first model has already played out and also fallen apart.

That first model predicted 440 – 1,500 deaths and 22,000 positive cases by Apr. 8th unless Wisconsinites followed Evers’ Safer at Home order. That model has largely been discredited by Palm’s own statements.

If Safer at Home is extended to June 24th, the new model predicts 160,000 more people could become infected than if it ended on May 24th.

The model wasn’t really a model but a doubling equation. The equation is based on the number of cases in Wisconsin doubling every 3.5 days for two weeks straight. DHS’ own publicly available data at that time indicated that the spread was slowing. By the time Palm went public with the model, it would have taken a 2.5-day doubling rate for the actual numbers to catch up to those predictions.

On April 11, it was taking 18 days for the total number of #coronavirus diagnoses to double in WI. This is as opposed to DHS’ original predictions based off of a doubling rate of 2.5 days. The lower the doubling rate, the quicker a disease spreads. pic.twitter.com/Hht37xV3P7

For the moment, it is unknown what affect this “new model” could have on the State Supreme Court’s decision. Even if it rules in the legislature’s favor, SD Palm would merely be required to submit her plans through the standard rule making process, where the legislature would have the opportunity to block or approve them. The “new model” could still be the driving force for her proposals if that happens, even though the model is already falling apart.