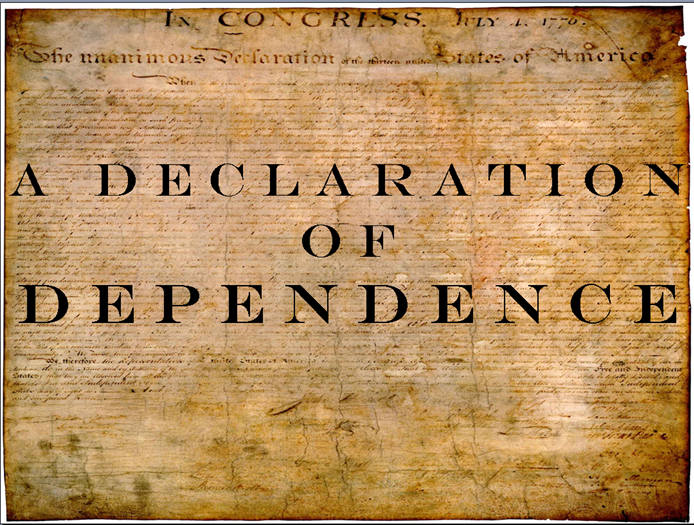 It’s not surprising that government would use an emergency to strengthen its control over the people, but Dan O’Donnell finds that what has been surprising is that the people have let it.

Is it time for a Declaration of Dependence…

When in the course of human events it becomes necessary for government to dissolve the liberty of the individual to protect the collective from the ravages of disease, we hold a new set of truths to be self-evident; that all men are endowed by fear to willingly give up their unalienable rights and instead allow government to decide for them what constitutes life, liberty, and the pursuit of happiness.

Never before in American history have we allowed ourselves to so test our founding document’s theory that governments which are instituted among men derive their just powers from the consent of the governed.

Not only have we consented to the draconian overreach of our government’s power, we have literally demanded it to keep us safe from a virus.

We have, in other words, signed a new declaration of dependence upon a government (at every level) that has consistently demonstrated its indifference or outright hostility to the most cherished rights of its citizenry.

Even more chillingly, the citizenry is perfectly fine with this.  Name a right guaranteed by the Constitution and there’s a good chance that a government has infringed upon it in the past two months.  Prohibit the free exercise of religion by closing churches?  If it stops the spread of the virus, that’s cool.  Abridge the right of the people peaceably to assemble?  You bet; we’ve got to flatten the curve.

Oh, and you want to petition the Government for a redress of grievances?  Good luck, protesting is banned now.

The systematic dismantling of the Bill of Rights is so brazen that one half expects to see the Governor of a blue state somewhere force his people to quarter soldiers in a time of peace just to see if he can.

Government in a free society (even in blue states), though, is consent, and ultimately it is the people who have the power to form it, to shape it, and, if need be, to break it apart.  When they don’t, when government and not God almighty becomes the creator and arbiter of individual rights, then tyranny is inevitable.

This isn’t to say that fighting the spread of Coronavirus isn’t a legitimate government objective.  It is.  But it does not negate the most basic fundamental rights guaranteed by the Constitution.  It doesn’t even pause them during a pandemic.

The balance between upholding these rights and protecting the populace has long been a delicate one, which is why the Supreme Court developed what has become known as the “strict scrutiny” review.

It is sadly appropriate that the first time the Court applied this standard—also known as the “least restrictive means” test—in Korematsu v. United States, wherein a Japanese-American fought his forced placement in an internment camp…and lost.

The decision is today considered one of the most unjust in American legal history, and with good reason: The deprivation of basic liberty in the name of security—no matter how grave the threat—is both morally and legally wrong.

Korematsu, though, did give rise to one of the greatest protections of liberty that exists today; a three step test to determine whether a governmental action that infringes on basic rights is Constitutional.  To pass this test, the action must be:

2.  “Narrowly tailored” to serving this interest, and

3. “The least restrictive means” of doing so.

Obviously, stopping the spread of Coronavirus is a compelling government interest, but blanket lockdowns and mass forced quarantines do not appear to be narrowly tailored to this and they are certainly not the least restrictive means that the government could employ.

Why, for instance, are churches limited to ten worshippers (effectively shutting down their weekly in-person services), but liquor stores are able to conduct business as usual?  Why are funeral homes limited to ten mourners, but day care centers allowed ten employees and 50 children?

The sheer arbitrariness of what constitutes an “essential business” that can remain open not only proves that the blanket shutdown is not the least restrictive means (if it were, a church would be treated the same as a liquor store), but it also violates federal law.

Two years after the Korematsu decision, Congress in 1946 passed the Administrative Procedure Act, which provides in part that courts must “set aside agency action, findings and conclusions found to be arbitrary, capricious, an abuse of discretion, or otherwise not in accordance with law.”

The “arbitrary and capricious” test is thus failed if a government action “lacks a rational basis and is the result of an unconsidered, willful, or irrational choice rather than a ‘sifting and winnowing’ process.”

It is impossible to “sift and winnow” with the hammer government has dropped on the liberty of its citizens, and the randomness of the various shutdowns’ dictates render them “arbitrary and capricious” on their face.

The most stunning thing about them, though, is that the people don’t seem to care.  It is an incontrovertible truth of human nature that those in power will wield that power against those without it.  America’s Declaration of Independence was so revolutionary because for the first time in world history, it asserted that power can only rest with the powerless.  The people must consent to be governed and consent to every exercise of government power.

For perhaps the first time in American history, the people have consented to the literal definition of tyranny; arbitrary, oppressive power wielded with a solemn assurance that it’s for our own good.

Such a declaration is unacceptable, as the protections we have established for our rights render this oppression unconstitutional.  We just have to assert it and demand that government once again function as it was founded.

If we don’t, then we will be what our founders warned us against: Willing to give up our liberty to purchase a little temporary safety, but ultimately deserving of neither.