Gov. Evers’ budget includes an 8-cent gas tax hike with automatic increases tied to inflation, but a small group of GOP lawmakers have an alternative plan that could save $22.8 million a year. #wibudget #wiright #wipolitics Click To Tweet

MADISON – Gov. Evers’ budget includes an 8-cent gas tax hike with automatic increases tied to inflation, but a small group of Republican lawmakers have an alternative plan. They say it could save the DOT $22.8 million a year through efficiencies and negate the need to raise the gas tax. They’re calling it the “Road to Sustainability Package (RSP).”

Senator Tom Tiffany (R-Minocqua) and Rep. Joe Sanfelippo (R-New Berlin) spearheaded the effort. It began to draw attention a couple weeks ago when Sanfelippo started talking about his plan to dedicate the sales tax from vehicle sales for roadwork.

Sanfelippo argues the gas tax is a declining source of revenue, while vehicle sales are increasing making his plan more sustainable than endlessly raising the gas tax.

Sanfelippo argues the gas tax is a declining source of revenue, while vehicle sales are increasing, making his plan more sustainable than endlessly raising the gas tax. In order to minimize the impact to the general fund, where all sales tax revenue current goes, Sanfelippo would only transfer a percentage roughly matching the rate of growth. In the first year, that amount would be 10 percent, approximately $103 million. Within 15 years, that would grow to 50 percent, or $517 million. (LRB-3344/2771)

Altogether, the package includes 15 bills. Some of them have been pitched before. LRB-3333/2033 would require the DOT to get approval from locals before building a roundabout in their community. LRBs 3334/2771 would require referendums to establish a local wheel tax.

LRBs 3336/2824 is another idea from last session. It would create an inspector general at the DOT, answerable to the Legislature. On one hand it would mean having a fiscal watchdog roaming the DOT. On the other hand, giving the Legislature a permanent presence in the executive branch could create separation of powers issues.

Another bill, LRB-3330/2281, would create a pilot program allowing the DOT to try out “Design-Build.” Rather than hiring a construction company after a road is already designed, this method would bring in the construction company during the design phase. The theory is that the company can apply its practical experience to find efficiencies and cost savings that engineers might otherwise miss.

After the State Highway Program failed a state audit, lawmakers passed a series of laws to implement the report’s recommendations. The design-build pilot program was originally part of the mix, but was taken out by a last-minute amendment.

The RSP would take the design-build concept further. Another bill (LRBs 3331/2380) would require the DOT to keep a stack of design-build projects plans “on the shelf,” that are ready to go for when additional federal funds become available for “shovel-ready projects.” This could lead to $6 million in annual savings. The disadvantage in having projects sit on the shelf like that is that critics often call it a “backlog.” They claim those projects are delayed when arguing for a higher gas tax.

The RSP includes other bills that would make tweaks to how the state regulates road construction. These items wouldn’t mean much to the general public, but some road experts think they could do some good. One would allow contractors to work more closely with the DOT on material selection (LRBs 3326/2377). Some experts say this could save $3.7 million a year.

Some road builders have had problems with local governments and residents when trying to establish gravel quarries near project sites. Residents in the Town of Albion sued the town board over issuing a permit for a quarry supporting the I-39/90 project in 2014. Project costs can start to balloon in situations like that. LRBs 3328/2378 would exempt these operations from local ordinances, preventing those situations in the future. Also related to building materials, LRBs 3329/2379 would allow road builders to collect construction materials from a road’s right-of-way. These two provisions could save the state $8.125 million a year.

Some of the bills deal with how contracts are written. Most road contracts could be described as “cost plus fee.” That means road builders are reimbursed for everything they paid for materials plus a negotiated amount for the actual work. That could be changed to a “cost plus fee plus award” model, where road builders are given incentives for keeping material costs below the original estimates (LRBs 3327/2376). That could save up to $5 million a year. Another bill would also offer incentives to DOT employees for coming up with cost savings ideas (LRBs 3335/3106).

The lawmakers also propose a pilot program that would explore “firm fixed price” contracts for bridges (LRBs 3332/2381). The current types of contracts used by the DOT place all the financial risks of projects on the taxpayer. This model would place that risk on the road builder. They would have to include labor, materials, and profit in their bids, and that’s all the money they would get. If the project ran over budget, the contractor would be responsible for covering it, not taxpayers.

Another bill would reward construction companies for completing projects under budget. There’s a bill that would address water quality issues for road projects (LRBs 3349/2382).

LRB 3338/2773 would prevent the DOT from expanding a project’s scope when designing highway reconstruction projects. They would be required to replace-in-kind. That means no new bike lanes, decorative awnings, or other add-ons.

The bills are currently being circulated for co-sponsorship until May 31. 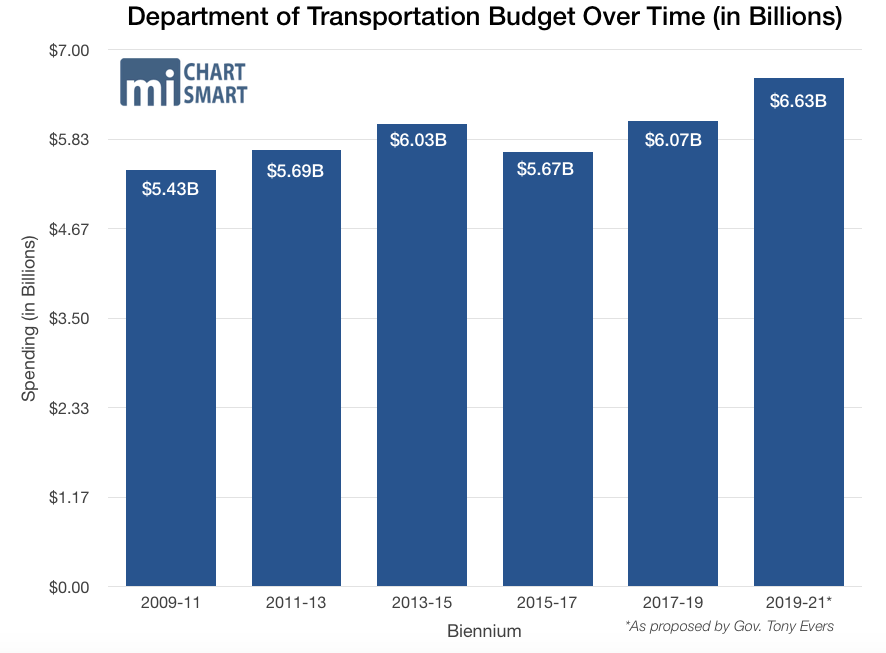