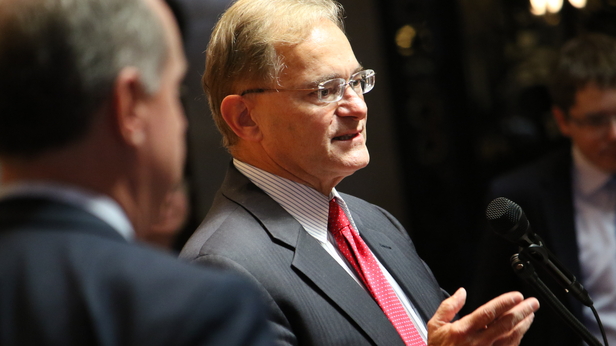 Since he became the Assembly Minority Leader in 2011, Barca’s directive has been clear: oppose Gov. Scott Walker. In fact, The Democratic Party of Wisconsin’s unofficial position is: when Walker wins – Dems lose.

And so, when Walker announced he had convinced Foxconn to build a $10 billion factory in southeastern Wisconsin that would create 13,000 family-supporting jobs, Democrats naturally had to oppose it. “Unfortunately” for Barca, the factory would be built right in his district. 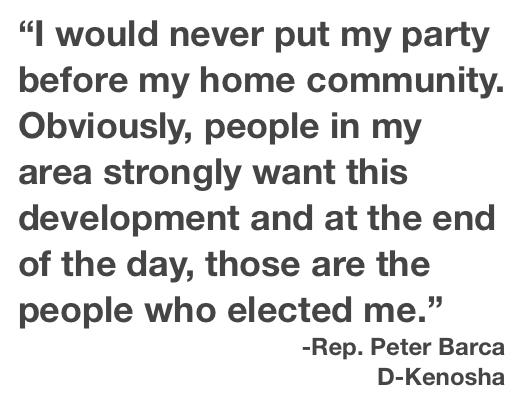 “I would never put my party before my home community. Obviously, people in my area strongly want this development and at the end of the day, those are the people who elected me. As much as I care deeply about my party, I believe in my party, at the end of the day you have to represent the people that sent you there,” Barca told Joy Cardin Tuesday on Wisconsin Public Radio.

The Foxconn deal was contingent on the Legislature passing a $3 billion incentives package by the end of September. According to a Legislative Fiscal Bureau analysis of the package, the state won’t start making money directly from Foxconn taxes until 2042. However, Wisconsin won’t exactly be handing $3 billion in cash to the company either.

Republicans point out $1.5 billion of the $3 billion incentives package is in the form of tax credits, and Foxconn would only be eligible to claim them on jobs paying between $30,000 and $100,000 a year. Another $1.35 billion are tax credits tied to capital expenditures. The last $150 million is money the company will save through a sales and use tax exemption.

Republicans call this “pay-as-you-grow,” because Foxconn only benefits from the tax savings if it creates the tax liability in the first place. Democrats simply branded it a “corporate giveaway” that included “$2.85 billion in cash payments.” Their messaging efforts were frustrated by the fact that some of their members crossed the aisle to support the deal.

In all, four Assembly Democrats would ultimately vote for the incentives package. All of them are from southeastern Wisconsin. In addition to Barca, Reps. Todd Ohnstad (D-Kenosha), Cory Mason (D-Racine), and Jason Fields (D-Milwaukee) all have an interest in seeing the company come to the area.

Three of them, Barca, Ohnstad, and Mason, voted for it on Aug. 17. However, that vote proved pointless, because the Senate decided to amend the bill and the Assembly would have to vote again. However, for Barca, the damage with his party was already done. After several hours in caucus on Sept. 7, Barca announced he would step down as minority leader at the end of the month.

A week later, on Sept. 14, the bill was back on the Assembly floor, and four Democrats voted for it. Fields switched his vote because the new bill included promises of job training for minorities.

“If I don’t take the opportunity to fight for African American men, what the hell am I doing?” @jmfields7 on his vote for Foxconn- #wiright

However, for most Assembly Democrats, there was nothing to cheer about.

“This deal reeks of desperation, by a desperate Governor as he runs for re-election and tries to hide behind the false promises of Foxconn to avoid facing the reality that he’s failed to create an economy that works for everyone, not just those at the top,” Rep. Chris Taylor (D-Madison) said in a press release after the vote.

Rep. Lisa Subeck (D-Madison) said, “The fix is in: Republicans are rigging the system against ordinary Wisconsinites and in favor of a single foreign corporation. The Foxconn corporate welfare giveaway doubles down on yesterday’s vote by Republicans for a budget rigged against the people of Wisconsin.”

Back in July, Subeck had accused Barca of making comments about Foxconn that “have not been consistent with the majority position of the caucus and have served counter to our interest.”

Rep. JoCasta Zamarripa’s (D-Milwaukee) press release stated, “With the passage of this bill, Assembly Republicans proved they were willing to gamble with the future of Wisconsin’s families, children, and small businesses.”

After the final Foxconn vote, Assembly Democrats quietly moved their timeline up on picking a new leader.

They met on Sept. 19, and quickly selected Rep. Gordon Hintz (D-Oshkosh) as the new minority leader. That result wasn’t surprising since Hintz was the only one to step forward and run for the position. What was surprising was that Democrats did not consider anyone else, especially in light of Hintz’s checkered past. In 2011 he threatened a fellow representative’s life on the Assembly floor, and was arrested for sexual misconduct at a “massage parlor.”

Clearly the most important issue for Assembly Democrats was that, unlike his predecessor, Hintz is no fan of Foxconn. He has staked out his position on the incentives package as a “costly economic trickle-down fantasy.”

Hintz made it clear that he expects the Foxconn development to ultimately fail. He wrote in a Sept. 15 column, “Walker has left the state fiscally unprepared for slower economic times. Now he is betting it all on the Foxconn package, which, under the best-case scenario, would not break even for a quarter-century. And knowing Walker’s and Foxconn’s history of ‘overpromising and underperforming,’ this best case is not likely to happen.”

Hintz’s selection as minority leader was essentially a validation of that position for the entire Assembly Democrat Caucus.

Meanwhile, Barca seems satisfied to refocus his attention on his district.

“It has been my honor to work as their leader in the fight for family-supporting jobs and an economy that works for everyone. Assembly Democrats have always fought to do what is right for Wisconsin families and workers,” Barca wrote in a Sept. 7 statement. “I will continue this effort but will be able to put much more focus on my district, which will have more challenges than ever in the months ahead.”

And by casting his vote in the pursuit of that goal, Peter Barca couldn’t lose.