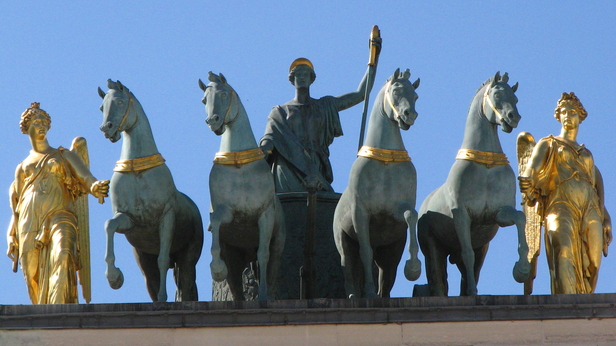 Chico Marx: Hey, boss! C’mere! Sun-Up is the worst horse on the track!
Groucho Marx: I notice he wins all the time.
Chico Marx: Aw, just because he comes in first.
Groucho Marx: Well, I don’t want ’em any better than first.

I always knew the state was gambling too much on entertainment, but this is ridiculous. We’re not horsing around when we say that state government is still too big. To give you an example of the ridiculous reach of government spending, the state of Wisconsin is actually on the hook for half of a $500 cash prize for winners of harness horse racing at county fairs.

For those of you who don’t know what harness racing is, it’s when the horses either trot or pace while pulling a two-wheeled cart carrying the jockey. It’s a little more genteel than the chariot race in Ben-Hur, and it only has one horse per cart. Nonetheless, it still is horse racing, complete with competitors like Sporty B Skipalong and Honey’s Yankee. The Wisconsin Harness Horse Association even has a website with all the race information at county fairs.

Of course, gambling at a county fair is illegal unless you’re playing a state lottery ticket. Just ask my bookie. Odds are race devotees get a thrill just from watching their favorite horse trotting along with a jockey bouncing along in the chariot behind them. So it’s surprising to learn that Wisconsin actually subsidizes the prize money.

Under the current law, the state will actually give half of the first place prize for one race at a county or agricultural society fair. The state also prevents local fairs that take the money from saying who is actually eligible for the premium prize.

It’s time to take the government out of the horse racing business and leave it with the journalists covering political horse races where it belongs. The wheels of legislation may turn slower than the wheels on a trotter’s horse cart, but legislation is in the works to repeal the law spending state taxpayer money as prize money and with it the silly government regulations. Carrot and stick are being thrown out entirely by Assembly Bill 438.

The bipartisan bill also removes several regulations governing county fairs that receive state aid. Fairs are currently required to have their accounting process approved by the Department of Agriculture, Trade and Consumer Protection (DATCP), when they’re not setting the minimum price for coffee at the grocery store. If they don’t comply with DATCP’s regulations, the local fairs could lose state funding.

The regulations of the DATCP are straight out of Terry Gilliam’s Brazil. In a letter last year from the DATCP to “Fair Secretaries or Managers,” the DATCP actually asked for the following:

Two (2) copies of the Summary Sheets showing payment of premiums by departments. The departments in Open Division, Senior Citizen Division and Junior Fair are the same as the department headings in Chapter ATCP 160. Do not change or divide departments. Although you may be paying premiums on some items that are not eligible for State Aid, they should be included in the proper department. Parade, herdsmanship, best barn, out-of-state awards, as well as uncashed premium checks should be deducted under 2 and 3 on the reverse side of the summary sheet. If the list is large, list on a separate sheet. Please include an adding machine tape showing your figures or computer sheet with the figures as there have been many errors that have been coming in on the summary sheets. Fill in the accurate figures for the number of exhibitors and number of exhibits on the back of the sheet.

Between the contents and the alternating bold typeface and underlining the letter reads more like a ransom note than a friendly bureaucratic reminder. And who still uses adding machines outside of the government?

Lest you think this is not a typical example of the regulation of county fair judging, the DATCP actually has a policy on the number of “Maximum Placings for State Aid Danish Judging.” Unfortunately I’m not sure if they’re referring to donuts or residents of Denmark. And if it is Denmark, Denmark Wisconsin or Denmark in Europe? More important, does anyone at the fairs or the DATCP know?

The DATCP also has joint control over the county fairgrounds. Then the fairs must publicly post their financial statements and be audited by the state Department of Administration. If only we spent that much energy on the Wisconsin Economic Development Council’s clients.

The proposed law extends the deadline for financial reporting, gets rid of DATCP’s authority over the fairgrounds, and puts the control of county fairs in the hands of the county fair organizers. The county fair can even determine that if some horse has raced in another competition whether they are still eligible to win a premium prize.

So by all means let us get the DATCP out of the running of county fairs. Let the horses run free without the bureaucrats in Madison asking for affidavits if junior contestants entered two horses. While we’re at it, let’s get the state out of the funding of local fairs, too, and turn our attention to ending the DATCP’s price fixing at the grocery stores through the minimum markup law.