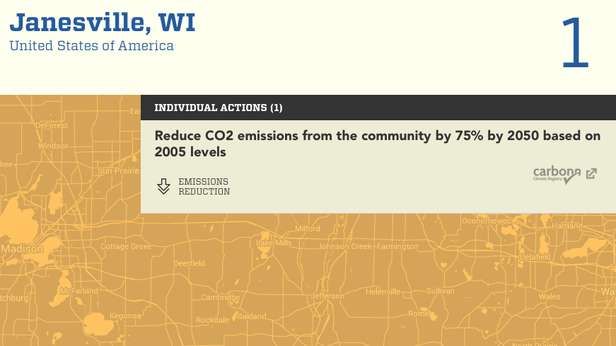 [Janesville, Wisc…] According to the United Nations, the City of Janesville has promised to reduce the community’s carbon emissions 75 percent by 2050, but no one in city hall has any idea who made that promise.

“Here in the city, itself, we have not made this commitment,” Maggie Hrdlicka, City Spokesperson, told the MacIver News Service.

On Tuesday, December 8, 2015, the UN announced in Paris it was launching a five-year plan to get more cities to make such climate change related commitments. This is part of the “Lima-Paris Action Agenda,” which was initiated at the climate summit in Lima last December by UN leadership.

Commitments are tracked by the NAZCA Platform (Non-state Actor Zone for Climate Action). Six Wisconsin cities are listed on the site. They include: Madison, Janesville, Racine, Kenosha, Milwaukee and Bayfield. NAZCA claims Janesville made a commitment to “Reduce CO2 emissions from the community by 75 percent by 2050 based on 2005 levels.”

NAZCA keeps a running tally of these commitments on its website. So far it claims to have received 2,255 commitments from cities around the world. It says it has 10,773 total commitments from cities, regions, companies, investors and CSOs. However, the site just compiles these “commitments.” It doesn’t collect the actual data. That comes from outside data collection organizations.

Janesville’s commitment came from the “carbonn [sic] Climate Registry (cCR),” which is run by a Bonn, Germany-based group called ICLEI – Local Governments for Sustainability. It claims on its website that it “is the world’s leading reporting platform to enhance transparency, accountability and credibility of climate action of local and subnational governments. It is designated as the central repository of the Compact of Mayors launched at the Climate Summit 2014.”

For the record, Janesville does not have a mayor. The registry lists Janesville, its supposed 75 percent reduction target, and a 2011 energy efficiency project at city hall as the sole mitigation action.

“This information is based on user input. The carbonn Climate Registry cannot be held liable for any data inaccuracy,” the webpage states. There is no username listed, but the information was entered on August 12, 2015.

The City of Janesville has a sustainability committee that makes policy recommendations to the city council. The council must vote on those policies before they can be implemented.

In the past, the council has adopted “Eco-Municipality Guidelines for Sustainable Practices,” and a green building policy. However, neither the Sustainable Janesville Committee nor the City Council had any knowledge of the 75 percent target.

“Nowhere is anyone familiar with the commitment,” said Hrdlicka.

Hrdlicka said there are conservation groups in Janesville, but there aren’t any environmental policy groups. She didn’t suspect any of them would have committed the city to the UN’s initiative without official approval.

MNS reached out to the ICLEI office in Oakland early Tuesday afternoon to get more information about how Janesville wound up in its database. ICLEI has not yet responded to that request. We will update this story as more information becomes available. The NAZCA website does not have any contact information listed.