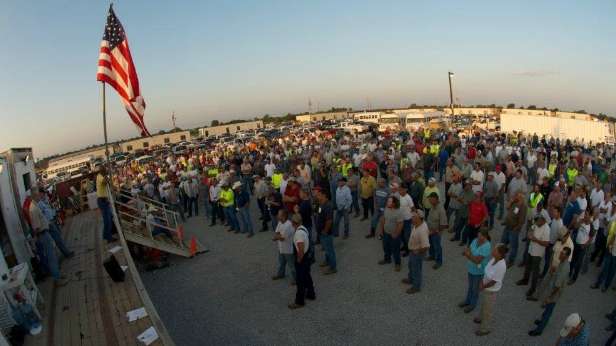 [Madison, Wisc…] After President Obama’s announcement on Friday to reject the Keystone XL pipeline application, Wisconsin Republicans and business leaders sounded off about their disappointment.

“Multiple studies, including review by the Obama administration’s State Department, have shown that building the pipeline is the most environmentally friendly method of transporting oil from Canada,” Sen. Ron Johnson (R-Wisconsin) said in a statement. “There is no good reason for the administration to block this project.”

During his announcement on Friday, President Obama said he was opposed to the project because it would have benefited the fossil fuel industry. That’s something he felt would hurt the US’s leadership role in the upcoming United Nations’ Conference on Climate Change later this month.

“Today, we’re continuing to lead by example. Because ultimately, if we’re going to prevent large parts of this Earth from becoming not only inhospitable but uninhabitable in our lifetimes, we’re going to have to keep some fossil fuels in the ground rather than burn them and release more dangerous pollution into the sky,” he stated on Friday.

The 1,700-mile pipeline would have transported oil from Canada’s tar sands to refineries along the gulf coast. That likely would have undermined President Obama’s legacy in regards to energy policy.

“Three years ago, I set a goal to cut our oil imports in half by 2020. Between producing more oil here at home, and using less oil throughout our economy, we met that goal last year — five years early,” he said.

Representative Jim Sensenbrenner (R-Wisconsin) reacted, “The President’s rejection of the Keystone XL oil pipeline is yet another example of his radical personal agenda getting in the way of what’s best for the country. Rather than creating thousands of jobs and increasing America’s energy independence, he chose to cave to the demands of environmental extremists and enhance his own liberal legacy.”

The US House of Representative voted to approve the pipeline last year 252-161. However, the Senate failed to approve it by a single vote (59-41). House Speaker Paul Ryan (R-Wisconsin) referenced that vote in his reaction.

“[The president] is rejecting the will of the American people and a bipartisan majority of the Congress. If the president wants to spend the rest of his time in office catering to special interests, that’s his choice to make,” Ryan said in a statement.

The president claimed the pipeline project would have had a negligible impact on jobs and the economy. Supporters of the pipeline strongly disagree with that. According to the US Chamber of Commerce, the pipeline would have created over 5,700 jobs in Wisconsin alone. Wisconsin Manufacturers and Commerce joined in criticizing the President’s decision.

“The Keystone XL project would have opened up tremendous new North American energy resources that would have driven the U.S. economy to new heights and fostered energy independence. The rejection of this critical energy infrastructure project proves yet again that President Obama puts the wishes of the radical environmental lobby ahead of the best interests of the American worker,” stated Lucas Vebber, WMC Director of Environmental and Energy Policy.

Paul Ryan said, “By rejecting this pipeline, the president is rejecting tens of thousands of good-paying jobs.”

The Administration’s decision is likely to be challenged in court.