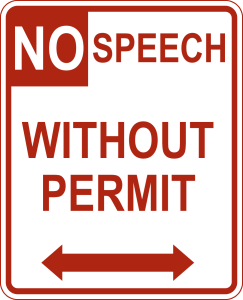 While it’s the job of the majority party in the legislature to pass actual legislation, it is the job of the minority party to complain and every-so-often indulge in wishful thinking of what life would be like if they were in the majority. This month, Democrats reminded us that the minority party’s wishful thinking on campaign finance is hardly the paradise on Earth they promise. It’s a hypocritical parade by would-be censors preening in their self-righteousness.

Earlier this month, Rep. Therese Berceau (D-Madison) announced her own campaign finance reform bill while flanked by the liberal special interests of Wisconsin Common Cause, the Wisconsin Democracy Campaign, Wisconsin Voices and the Wisconsin Public Interest Research Group. Berceau said in her press release, “People are sick and tired of being bombarded by misleading and negative TV ads, robo calls, and mailings before elections. We can’t legally restrict those ads, but we can make sure voters know who is paying for them and trying to influence our elections.”

It’s good to know that in Berceau’s world because people don’t like advertising during “Dancing with the Stars” that she would do anything she can to impose burdens on the free speech rights of the advertisers. I can’t stand seeing political commentator Rachel Maddow in advertisements that appear even when I’m watching Fox News. I’m looking forward to Berceau’s next bill that prevents such cable cross-channel pollination so annoying to political cable news consumers, or at least requires Maddow to register every political utterance with a state agency.

While we await the details of her latest bill, we’re told it includes donor disclosure 60 days out from an election not only for express advocacy groups but also issues advocacy groups. This is not just a return to the status quo but a new burden on the free speech rights of organizations educating the public on issues. The change in campaign finance laws to include organizations that are not expressly advocating the defeat or election of a political candidate certainly runs counter to the spirit of US Supreme Court decisions going back to Buckley v. Valeo.

Berceau’s bill also “clarifies” when coordination between political candidates and issue organizations must be reported despite the recent Wisconsin Supreme Court ruling making it clear that such activity is protected speech. Just because GAB Chairman Judge Gerald Nichol is unhappy with the Supreme Court ruling because it shut down his persecution of conservative organizations it does not mean that Berceau should attempt to codify Nichol’s preference for shutting down free speech.

Berceau’s stance is especially ironic as she posed for the holy picture with liberal issue advocacy organizations while promoting her new bill. Is Berceau going to claim that Wisconsin Common Cause and the Wisconsin Democracy Campaign just happened to show up when she did, just happened to like her bill, and just happened to issue statements praising her bill using the same language? Or is it more likely that the joint appearance and the press release was coordinated ahead of time?

Actually we know the answer because former Democratic member of the Assembly Penny Bernard Schaber, a member of the Common Cause board, bragged about her role in helping to write the bill. Now that’s coordination. So much for Wisconsin’s Democrats being opposed to outside organizations writing legislation.

That didn’t stop Wisconsin Democracy Campaign’s Rothschild from taking it a step further in his coordinated press release, “We urgently need a law on our books that prevents such coordination, otherwise candidates could simply steer their richest donors to these outside groups.” Does Rothschild mean groups like Wisconsin Democracy Campaign? Or any other left-leaning organization that has ever accepted money from George Soros?

I can’t wait for Berceau, Rothschild and Common Cause’s Jay Heck to march in protest outside the next joint press conference with legislative Democrats and Planned Parenthood. “Two, four, six, eight, don’t let them coordinate!”

The purpose of all this, of course, is to stop the “dark money” that funds the television commercials that upset Berceau’s television viewing habits. Or as Heck stated in Berceau’s press release, “A tsunami of secret money from within and outside of Wisconsin can flood our elections to influence our votes.”

Dark money sounds scary but what Berceau is really trying to stop is anonymous giving. I wonder if Berceau realizes that if she got her way, the Alabama NAACP would have been forced, during the start of the Civil Rights era, to turn over to the Alabama Attorney General the names and addresses of all of its members? Thankfully, the United States Supreme Court stepped in back in 1958 to protect ‘dark money’ and stop the Alabama government from harassing the local members of the NAACP. But, what if Berceau’s bill had been the law of the land at that time?

By placing a campaign donation limit of $10,000 to political parties, as Berceau’s bill supposedly does, more money will be driven to issues-advocacy groups and even more independent expenditure campaigns. It’ll be interesting to see what unconstitutional measures are proposed then to curb free speech.

Fortunately, as Rothschild concedes in his press release, Berceau’s wishful thinking has little chance of becoming reality. “Sometimes it’s important just to lay down a marker of what a better campaign finance system looks like.”

A better campaign finance system would be one that actually encourages more democratic participation and more speech, not less. Liberals once readily spouted the maxim misattributed to Voltaire, “I don’t agree with what you say but I will defend to the death your right to say it.” Today Wisconsin’s liberals would rather say, “I don’t agree with what you say and, if I can’t prosecute it, I’ll harass it any way I can until my television is commercial free.”