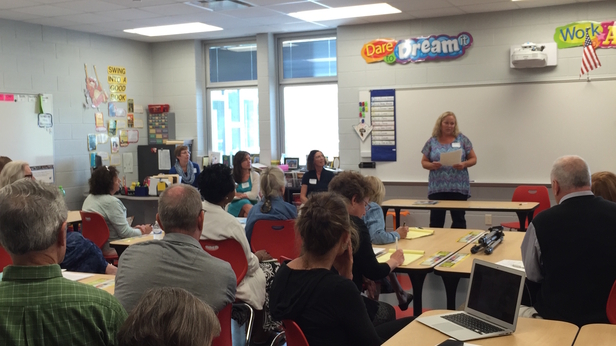 In the few years since Gov. Scott Walker was first elected Governor – lets not count the second, or the third time – progressives in Wisconsin have had a tough run. Union numbers are plummeting, the size of state government is slowly shrinking and taxes continue to fall.

None of this is news. In fact, progressives themselves recognize it, as evidenced by the recent Wisconsin Public Education Summit and especially during the panel entitled “Celebrating the Public: Myth-Busting, Values-Based Messaging, and Getting It Right.”

During this panel, Julie Wells of the Forward Institute discussed how the left can reframe their arguments in order to gain back ground by avoiding conservative “frames.” She and other speakers also emphasized the active celebration of positive progressive worldviews rather than negating traditional and patriarchal conservative values.

The first order of business: that pesky governor himself.

“It’s like, every time you say Scott Walker, you’re actually reinforcing the awareness of Scott Walker,” Wells said. “So perhaps just when you talk about him, just say ‘the governor’.”

Say what? Not Scott Walker, apparently.

If any of this is confusing, let’s backtrack. Wells, who became relatively well known around the state for her leadership in the recall effort, wants progressives and liberals alike to stop using conservative terminology. According to Wells, this is based off of ideas in psychology which say that 98% of the thought process is done unconsciously.

So rather than taking a conservative frame and negating it, people should instead affirm the positive progressive frame.

“A great example of negation is the title of George Lakoff’s book, ‘Don’t Think of an Elephant’,” Wells said. “You can’t do it. You cannot do it. When you say the word ‘elephant’ the frame is activated and to not think of an elephant you first have to think of an elephant. So, when you say ‘Milwaukee Public Schools are not failing’…’the Milwaukee Public Schools are failing’ is activated. So negation does not work.”

That’s all fine and well – but to avoid the governor’s name entirely? It’s the political equivalent of sticking your head in the sand, humming loudly to yourself while you hope the problem goes away. Or even more amusingly, it’s a page out of a Harry Potter book. After all, He Who Must Not Be Named benefits from name recognition, which we could not possibly give him. You Know Who should be dealt with, but to utter his name would be not only unwise but also actively harmful to the cause.

After Wells spoke, Mary Jarvis followed up with a longer presentation on values-based messaging. Jarvis, a retired educator, stumbled on more than one occasion when she tried to talk about Scott Walker while avoiding his name.

Perhaps rather than using tactics like avoiding You Know Who’s name, Jarvis and her colleagues should fight based on policy and what works better. Though, according to them, they have been – it has just been futile.

“We’ve been hearing for decades that Milwaukee Public Schools (MPS) are failing. We’ve heard it so often that it really has become common sense,” Wells explained. “Everybody believes it. It’s in the minds of the public. And it’s been said so many times that people believe it – they don’t care about facts. They know it. Their frame is strong. Now that fact is growing to include all of public schools. And to change that, you have to first get the listener into the progressive frame. And then the facts won’t bounce off.”

Unfortunately for Wells – and more importantly the kids in Milwaukee – many schools within MPS are failing. Yes, there are some higher-performing schools, but the district as a whole has been floundering for years.

This is not an opinion. It is a fact.

In the past three years, 65 schools in Wisconsin have received a failing grade on the state’s School Report Cards two or more times. Of those chronically underperforming schools, only six of them were outside of MPS. Plus, according to the same report cards, MPS is the only district in the state to receive a “fails to meet expectations” score – 51.1 points out of 100.

Four out of five students are not proficient in reading or math in the district. Activists such as this conference’s attendees may not like using the word failure when it comes to schools, but they should set aside their sugarcoating and deal with the facts.

According to Wells, none of the evidence on MPS’s failing schools is true – it’s just that listeners have had a strictly conservative frame tell them that. A listener must be first given the proper frame to think about things before they accept facts.

It can’t at all be possible that facts are facts, and intelligent individuals will consider a variety of factors and then make a decision. No, I’ve been duped into thinking this way, by He Who Must Not Be Named and the rest of his nameless crowd.

Later in the session, panel speakers put up a PowerPoint slide and passed around handouts to show different conservative frames and the appropriate progressive alternatives. I learned that gun control is actually gun safety. Entitlements should be thought of as delayed compensation. Right to work is wage theft, and vouchers are taxpayer subsidy for-profit private schools.

The crowning jewel, the move for which You Know Who is famous: collective bargaining. We don’t say that anymore – we say mutual workplace problem solving.

I’m sympathetic to the idea that framing is important and messaging should be thoughtful in order to be successful and make it to the right people. Neither authors nor politicians live in vacuums, and both must consider their audiences before writing or speaking.

Now, it seems, rather than changing their policies and contributing fresh ideas that will work for Wisconsinites, the protestors of old have simply rebranded the same old ideas with creative new terms.

Perhaps rather than avoiding the very terms they themselves fought for, progressives should focus on finding the right ideas and the right policy to go along with them. Not in this state, though – not if He Who Must Not Be Named has anything to do with it.