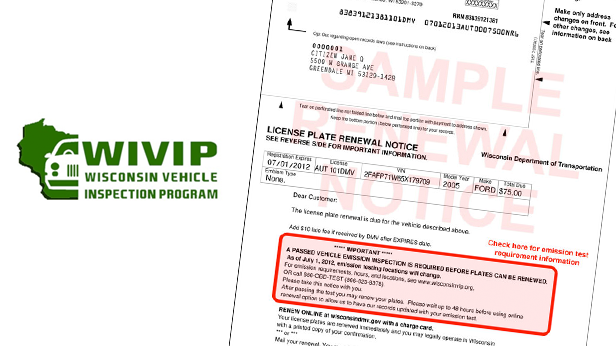 The notice from the Department of Transportation (DOT), Division of Motor Vehicles (DMV), had all of the subtlety of a ransom note. Bold fonts of varying sizes exclaimed, “Vehicle Emission Notice” and “Pass Emission Test Before September 13, 2015.”

Pretty amazing since the Lovely Doreen from Waukesha just bought the car, a 2010 Ford Explorer, from a reputable dealer just a few weeks ago. The bank hasn’t even set up the payments in their computer system. She just put in her second tank of gas on the same day the DMV sent her a note warning her, “Since you have recently registered this vehicle, state law requires you to have your vehicle inspected immediately.”

We’re told that buying a car can be an intimidating process for some women. If there’s an expensive government study proving it (I’m sure there is), I wonder if they took into account the threatening letter at the end of the process from the Wisconsin DMV.

“YOUR VEHICLE REGISTRATION WILL BE SUSPENDED IF YOU DO NOT PASS EMISSION TEST REQUIREMENTS BEFORE THE DATE IDENTIFIED BELOW.”

And I thought the anonymous letters I get regarding my newspaper columns were scary. I’m surprised the DMV doesn’t clip the capital letters from magazines and paste them on the page for the full effect.

As my wife said, “I just love how they make you feel like you did something wrong. I bought a car.”

The whole thing is ridiculous. What is the state going to do? My wife has been issued the license plates with a sticker already. Are they going to send someone to our house to clip the sticker off? Where do they think we live, Milwaukee?

Also, does the DMV really believe that a car made in 2010, and sold by a major auto dealer in Southeastern Wisconsin, will not pass the emissions test? Perhaps the new car smell will accidentally trigger a false positive.

The test won’t cost my wife anything except her time. The state will reimburse the auto shop (probably the dealer where she bought the car) $2 for the test, so that’s not an expense for them. But the taxpayers pay for approximately 650,000 tests every year, according to the Milwaukee Journal Sentinel. That $1.3 million every year could have been a down payment on an unconstitutional John Doe investigation. Actually, it’s more, because the state pays the service center $4 if they issue the vehicle registration renewal sticker for the license plate.

That doesn’t even include the cost of administering the program. Sending my wife the letter probably cost the state much more than any acid rain caused by the Explorer’s tailpipe. The Legislative Fiscal Bureau says the state DOT pays the contractor administering the program $2.6 million per year. Think about how many home raids Judge Neal Nettesheim could authorize with that kind of money.

This is how ridiculous the rule is. If, after the emissions test, the Lovely Doreen decides she doesn’t like the Explorer after all and sells it to someone else, that person will receive a threatening letter as soon as the car is registered in their name. I wonder what the record is for the most emissions tests for a vehicle in a single year?

The reason we have an emissions program is because of a mandate from the Environmental Protection Agency to control ozone emissions in the seven counties as determined by EPA testing. In order to escape the whole emissions testing requirement, Wisconsin would have to show that it would reach the attainment level of ozone emissions some other way than controlling vehicle sources of ozone.

Of course, Doreen and I could just avoid the whole hassle and re-register the car in Jefferson County, or any of the 65 counties that don’t require emissions testing. It would save the state money, save a tree in paperwork processing, and protect the environment just as much as if we wasted the time to have the car tested. But that would be wrong, even illegal, for some reason.

However, that option may be taken away if new EPA regulations go into effect for controlling ozone emissions. The EPA is proposing dropping the acceptable level of ozone from 75 parts per million to 65 parts per million, a rule that will be finalized in October. Aside from shutting down Yellowstone Park, it would put much of Eastern Wisconsin out of compliance. Areas that aren’t in compliance with the lower standard will lose eligibility for federal highway funds.

The new EPA ozone standard will cost Wisconsin motorists an extra $1 billion to operate their vehicles between 2017 and 2040, according to a study by the National Association of Manufacturers. Compliance with the new EPA standard will have a total cost of $10 billion, and will cost $28 billion in Gross State Product.

But that’s okay, because we won’t be able to afford cars after 23,561 people lose their jobs every year under the new EPA ozone mandate. Wisconsin’s emission testing may be annoying, even stupid at times, but the EPA is about to make everything worse.