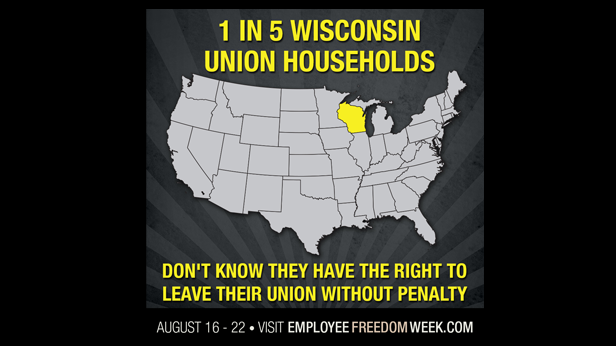 [Madison, Wisc…] The third annual National Employee Freedom Week kicked off Sunday, once again highlighting a worker’s right to leave their union without the fear of losing their job or any other penalty.

The project, started by the Nevada Policy Research Institute (NPRI) in 2012 at a local level, now has close to 100 sponsors in 40 different states – including The John K. MacIver Institute for Public Policy.

Employee Freedom Week is an effort to inform workers about the freedoms they have when it comes to opting out of their local unions, and it provides employees around the country with the paperwork and know-how to do so.

In Wisconsin, nearly every worker in the state has the right to opt-out of his or her union thanks to right-to-work and Act 10 – Gov. Scott Walker’s signature public sector collective bargaining reforms.

Even with the state’s labor reforms dominating the news cycle in recent years, one in five union households is still unaware of the freedoms they have, according to recent polling by NPRI. Employee Freedom Week aims to bring more awareness to these rights in Wisconsin and across the country.

Workers in states without right-to-work do not have these same wide-ranging freedoms. But, they still have some options for opting out of their union.

Union employees in non-right-to-work states can become agency fee payers – members that only pay dues to cover collective bargaining and operational costs, not political activity. Workers can also become religious or conscientious objectors, whose dues would go to a charity instead of the union.

This educational campaign proved to be a huge success for workers’ rights in 2012. NPRI informed local teachers in Clark County, Nevada of their ability to legally opt-out of the union during a mandated two-week period. After the two weeks ended, hundreds of teachers had left the union.

The next year, the NPRI launched Employee Freedom Week nationwide.

Back in Wisconsin, legislators are proud of the work they have done to give employees more freedom.

“I am pleased to have played a role in Wisconsin’s expansion of worker freedom this session. I have been a vocal, longtime supporter of right-to-work legislation, and it was well past time for our state to incorporate this vital workplace reform,” Assembly Labor Committee Chair Rep. Andre Jacque (R-De Pere) told the MacIver Institute.

“Our efforts earlier this year will protect workers’ freedom of association and ensure that they do not have to join or pay dues to any union organization in order to keep their job.”

Another legislator echoed Jacque’s comments in support of Employee Freedom Week and right-to-work.

“Employees should not be compelled to join a group or association with which they don’t wish to belong. It’s an issue of personal freedom for me,” Sen. Leah Vukmir (R-Wauwatosa) said. “By passing a right-to-work law in Wisconsin, we ensured private-sector employees will now have the ability to opt out, resulting in increased accountability.”

National Employee Freedom Week is August 16-22, 2015. More information can be found at EmployeeFreedomWeek.com.