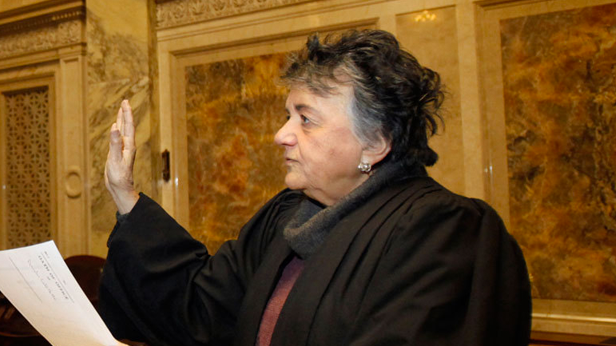 What, you weren’t expecting democracy, were you? Did you really expect the voters to have the final word when they passed a constitutional amendment via referendum? Maybe you were fooled by all of the rhetoric about democracy from liberals before the amendment passed changing the method of selection of the chief justice.

Voters chose on April 7th to amend the state constitution to change the method of selection of the state Supreme Court’s chief justice. Instead of the title falling to the most senior member, the chief justice is chosen by majority vote of the justice’s colleagues. Perhaps we could add the spotting of white smoke to the new ritual.

When state Supreme Court Chief Justice Shirley Abrahamson announced she was suing her colleagues and much of state government in an effort to retain her position as the chief, some of you were actually surprised. You shouldn’t have been.

There hasn’t been a major change in this state that hasn’t been the subject of a lawsuit by Wisconsin’s liberals. From Act 10 to Right to Work, liberal lawyers are printing their own money with these lawsuits. It only took nearly three years for Wisconsin’s voter ID law to work its way out of the court system. Just imagine how long Abrahamson’s lawsuit can take.

My favorite part of Abrahamson’s lawsuit is that voters re-elected her in 2009 expecting her to serve her full term as chief justice, “absent her resignation, death, disability, or recall.” I was surprised she’s willing to concede that any of those circumstances would be sufficient for someone else to serve as chief justice. After all, as Abrahamson explained in the lawsuit:

“She campaigned extensively and expended substantial resources for reelection on that theme of continuity in the chief justice position and would not have sought reelection if there was a question about whether her reelection would retain her in the office of chief justice.”

In other words, had she known that the referendum changing the constitution was coming in 2015 she would have stayed home on Election Day in 2009 because she only wants to be in charge. She must have been especially annoying in kindergarten.

But for all of her talk about the “settled expectations” of voters in 2009, suing just to prevent anyone else from becoming chief justice while she serves on the court, after the voters made it clear they would prefer a more democratic process than seniority, undermines the rhetorical claims by those opposed to the referendum of protecting democracy.

The television commercials were especially fun when they claimed that the voters’ right to choose the chief justice was being taken away. Former Supreme Court Justice Janine Geske claimed we, “twice elected Shirley Abrahamson as our chief justice.” She also told voters, “Protect your vote in our democracy. Vote ‘no’ on April 7.”

Of course, the voters did not, and do not, vote for a chief justice. Had the voters rejected Abrahamson in 2009, Randy Koshnick would not have become the chief justice. Instead, the title would have passed to the justice with the most seniority.

But democracy was never a strong suit with liberals when it comes to our state’s highest court. It was just a few years ago that Geske called for a change in the way state Supreme Court Justices are chosen. She was not alone.

After the race between Justice David Prosser and JoAnne Kloppenburg, the great “fix” for whatever problems ailed the Supreme Court was “Merit Based Selection,” an end to elected justices. Instead, a “judicial selection commission” would give the governor a list of candidates from which he could choose.

Another idea floated to limit democratic participation in the selection of our Supreme Court justices would be to limit them to a single sixteen year term. This was the scheme of a committee of the state bar association. The idea is to eliminate the influence of special interests on re-election campaigns. All the proposal will do is insulate the judges from accountability and make the elections that much more contentious because they will all be for open seats.

The Wisconsin State Journal endorsed both ideas again in January, but after that it has been mostly silent. That’s probably because it was apparent for some time that the liberal Bradley was going to easily win re-election. Complaining about democracy in judicial elections was not compatible with getting the preferred result, especially when they were going to use “democracy” as their main cudgel against the constitutional amendment.

There have been other attempts to limit democratic participation in electing justices, too, from limiting campaign contributions in exchange for public financing, to attempts to force recusals of justices from cases because of third party issue advocacy expenditures.

None of these ideas would have made the court members more collegial. Making the chief justice answerable to his or her colleagues may lead to better relations. The good news for Abrahamson is that if her colleagues like their chief justice, they can keep her.

Of course, suing them was probably not the best approach to making friends.