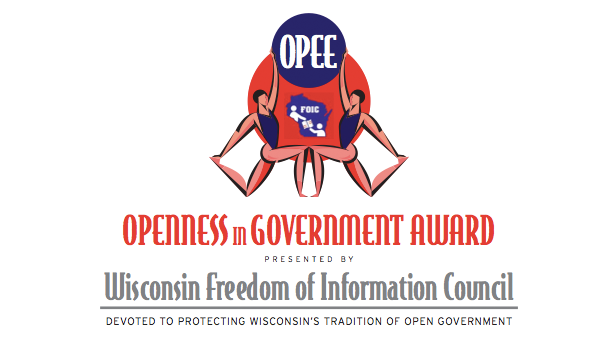 [Madison, Wisc…] In advance of National Sunshine Week, the Wisconsin Freedom of Information Council (WFIC) declared the winners of its annual Openness Awards on Thursday.

Sunshine Week will be observed March 15-21 this year. The goal of Sunshine Week is to, “promote a dialogue about the importance of open government and freedom of information.”

“Most people in Wisconsin, including public officials, have grown to appreciate the state’s traditions of open government,” said Lueders. “These awards are meant to encourage this trend.”

Winners of this year’s Openness Awards – or Opees – include Gannett Wisconsin Media for highlighting the ability of district attorneys and the state attorney to prosecute violators of the open meetings law and Ryan Honl for blowing the whistle on issues at the Tomah VA Center and U.S. Sen. Tammy Baldwin’s (D-Wisconsin) failure to act, among others.

The MacIver Institute won an Opee from WFIC in 2012-13 for pursuing records from State Sen. Jon Erpenbach (D-Middleton) relating to Act 10. MacIver filed a lawsuit against Erpenbach when he failed to turn over unredacted emails of public employees that were sent to Erpenbach’s office.

The Institute won the case and Erpenbach was required to release all the records MacIver asked for. The investigation led to the discovery that two-thirds of the emails sent from public employees during the Act 10 fight were done using taxpayers resources during normal business hours.

The full list of winners for this year’s Opee Awards is below:

Media Openness Award (“Mopee”): Gannett Wisconsin Media. Wisconsin’s open records and open meetings laws grant county district attorneys and the state attorney general authority to prosecute violations. But a series of articles in March 2014 by Gannett reporters Eric Litke and Jim Collar found they rarely do so, leaving citizens and media to shoulder the burden of pursuing legal action. As the Appleton Post-Crescent, a Gannett paper, noted in an editorial, “it seems like prosecutors aren’t doing their jobs to protect open government.” That needs to change.

Political Openness Award (“Popee”): Karen Domagalski, operations manager, Milwaukee County Medical Examiner’s Office. In a state where some medical examiners and coroners withhold basic information about death investigations, Domagalski has promptly released these reports and even helped reporters track things like child deaths and overdose deaths. The public is well-served by her efforts.

Open Records Scoop of the Year (“Scoopee”): John Diedrich, Milwaukee Journal Sentinel. Dennis Munson Jr.’s first amateur kickboxing match, in a Milwaukee venue in March 2014, was also his last: the 24-year-old collapsed in the ring and died shortly thereafter. Investigative reporter Diedrich fought to obtain video of the fight from police and prosecutors, and used it to document multiple and egregious failings on the part of fight officials. His in-depth reporting on this unregulated sport prompted investigations and the introduction of legislation that could save lives.

Whistleblower of the Year (“Whoopee”): Ryan Honl. This Gulf War veteran and West Point graduate quit his job at the Veterans Affairs Medical Center in Tomah after two months, filing a whistleblower complaint decrying its prolific use of narcotic painkillers. Honl also blew the whistle on U.S. Sen. Tammy Baldwin and others for failing to act, and served as a source for the national Center for Investigative Reporting, which documented a huge increase in opiate prescriptions at the Tomah facility. A Baldwin staffer got the ax, and the VA’s use of painkillers is getting national scrutiny.

No Friend of Openness (“Nopee”): State Department of Administration. This $1 billion-a-year agency claims it lacks resources to avoid long response times on records requests, but has no excuse for the ridiculous secrecy it has brought to picking a developer for the nearly $200 million Hill Farms office project in Madison. It has at various times refused to name the bidders, tentative winner and even selection committee members, claiming disaster would ensue should these cats escape the bag. The DOA knows better, and the public deserves better, too.

The “Oopsie”: Accidental leaks in the John Doe II probe. This special award is being given to acknowledge the screw-ups that have shed light on the second of two secret probes involving Scott Walker. A leak in February identified probe targets. A failed effort to fully redact information in March revealed that a judge’s ruling that seized records be returned was stayed pending judicial review. And records showing Walker campaign coordination with “independent” groups became public through an accidental breach in August. This isn’t how open government is supposed to work, but we’ll take it.