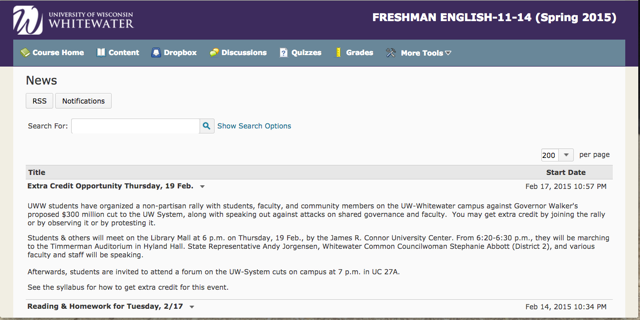 Dr. Beth Lueck was a Democrat candidate for the State Senate in 2012 and the Assembly in 2014. She has also taught American Literature at UW-Whitewater for the past 20 years.

The protest is to be held at UW-Whitewater on Thursday at 6:00. Lueck announced the opportunity to receive extra credit for the event on an internal university website that posts homework assignments and class announcements.

Lueck posted the extra credit opportunity on Tuesday, February 17th. It is available to any of her students who participate in the rally in any way.

“You may get extra credit by joining the rally, or by observing, or by protesting it,” Lueck’s announcement reads.

She specifically notes the rally is “nonpartisan,” it’s against Governor Walker’s “proposed $300 million cut,” and it’s “against attacks on shared governance and faculty.” Representative Andy Jorgensen (D-Milton) is expected to attend.

According to university records, Lueck taught 50 students in her freshman English classes last year, and about 100 students a semester in all her classes combined.

The MacIver News Service reached out to Dr. Lueck Thursday morning for comment. We will update this story as more information becomes available.