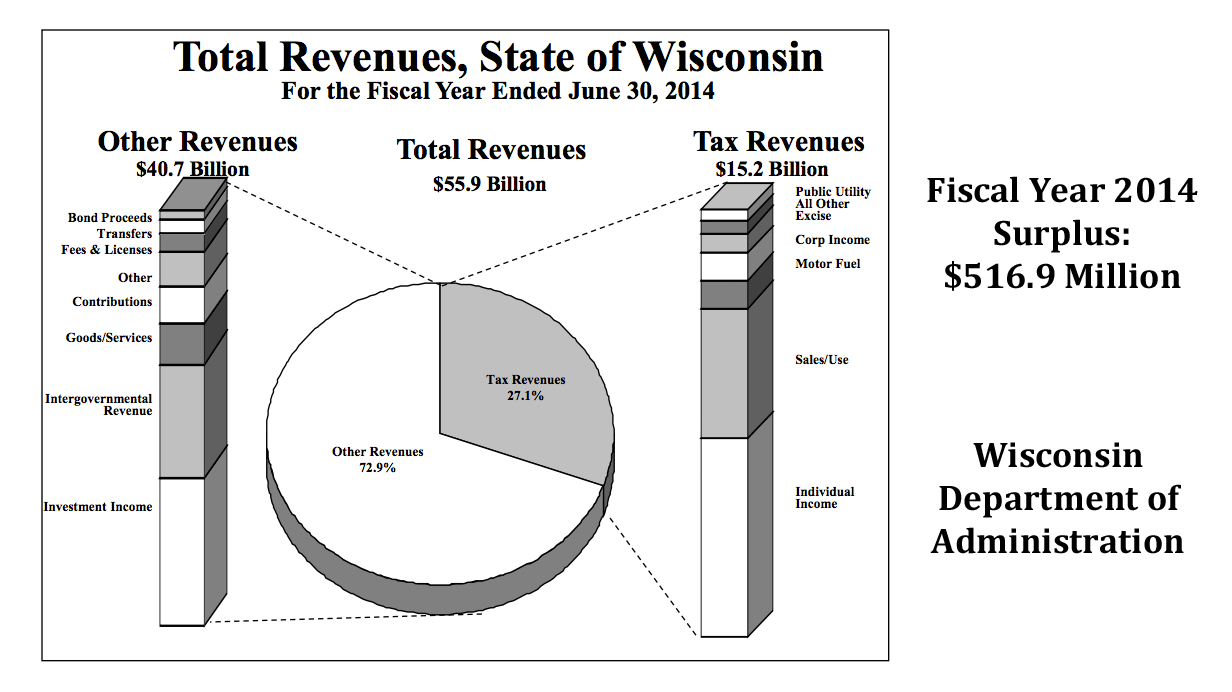 [Madison, Wisc…] Wisconsin finished fiscal year 2014 (FY14) with a $516.9 million surplus, according to the state’s 2014 Annual Fiscal Report published by the Department of Administration. That total is $73.9 million greater than the Department of Revenue’s initial estimated surplus of $443 million, which was released last month.

While the amount of total revenue collected decreased by one percent, or $138 million in fiscal year 2014 (FY14), the state spent $125 million less than budgeted for the year.

Personal income taxes were most significantly changed from 2013, coming in $435.5 million short of last year’s collections as a result of income tax cuts and withholding changes enacted in the previous session.

The state also maintained its “rainy day” fund of $280 million.

In education spending, school aids increased by $140 million in FY14 compared to the previous year, and spending on the UW System also increased by $52 million.

“We cut taxes by over $2 billion last session, we cut property taxes, we froze tuition and we paid off our debts,” said the co-chairs. “Wisconsin is better off, because we budgeted the way families throughout the state do – we are paying our bills and investing in the future.”

Yesterday, the Department of Revenue (DOR) released numbers on tax revenues in the first quarter of FY15, showing that collections exceeded projections by 55.3 million.

According to DOR’s release, state tax collections were more than $2.7 billion from July to September of this year.

Compared to tax collections during the same period in FY14, revenues are down 2.3 percent. However, the drop was expected because of income tax cuts and a 10 percent decrease to withholding rates. When adjusting for the tax cuts to create an apples-to-apples comparison, tax collections are beating the Legislative Fiscal Bureau’s May projections for the first three months of this fiscal year.