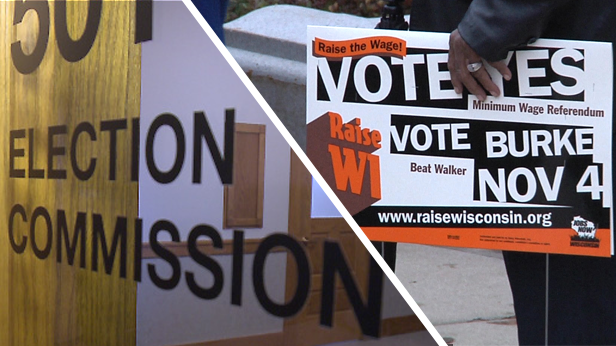 WJN has coordinated a massive get-out-the-vote (GOTV) effort for Mary Burke in the two weeks prior to Wisconsin’s November 4th election. The left-wing group has been picking up Burke supporters from targeted portions of downtown Milwaukee and driving them to the city’s Zeidler building to vote early.

During the first few days of early voting in the city, WJN vans seemed to have exclusive parking privileges outside the polling location, which the MacIver Institute and Media Trackers previously reported. While Neil Albrecht, Milwaukee Election Commission Executive Director, said the parking areas outside the building were for anyone, another election official said they were strictly for WJN vans.

In an effort to see if the City of Milwaukee had worked with WJN to give them special access or privileges during early voting, the MacIver Institute filed an open records request with the Election Commission.

Rickman emailed Patrick Curley, Mayor Tom Barrett’s Chief of Staff, on Saturday, October 4th to try and set up a meeting with Curley and the mayor about WJN’s early voting plans.

“I think it would be helpful if we could meet with you and the Mayor to discuss generally what is and can be happening with in-person absentee voting in the City,” he wrote in the email.

Albrecht responded to Rickman’s request after Curley forwarded the email.

“Thanks for reaching out to us as we approach October 20,” Albrecht wrote. “I’m glad to hear your organization will be conducting the same outreach efforts as in 2012.”

The emails do not determine what was discussed at the October 10th meeting.

“There were no notes taken during that meeting,” Albrecht told MacIver in an email. “The purpose of the meeting was limited to Mr. Rickman informing us that WJN would again be providing shuttle services to voters during in-person absentee voting.”

It appears that any issues with exclusive parking for WJN vans were cleared up by the end of the first week of early voting.

The MacIver Institute also filed open records requests with Milwaukee’s Department of Public Works and Mayor Barrett’s office. Both offices have yet to fulfill the request.

All the documents obtained from the Election Commission are available by clicking here.

Check back for updates as they are available.