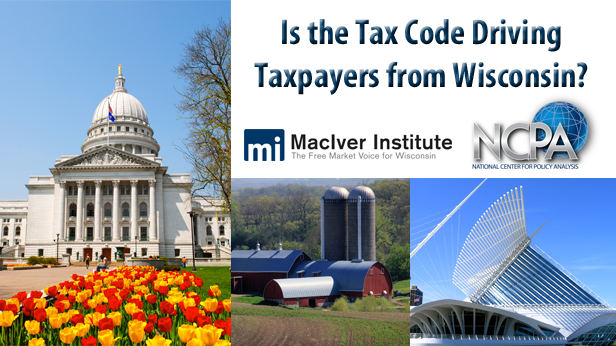 An Analysis of Wisconsin Taxes

The news for Wisconsin taxpayers has been quite positive lately. Governor Scott Walker and lawmakers have cut taxes three times in the past year, and since 2011, taxes have been cut by nearly $2 billion. In addition, the tax code has been simplified, eliminating 17 special interest tax credits and reducing the amount of income tax brackets from five to four.

While these recent events are great news for the hard-working taxpayers of the Badger State, this new report from the John K. MacIver Institute for Public Policy and the National Center for Policy Analysis (NCPA) shows there is more work to be done.

On average, Wisconsin loses $136 million a year in adjusted gross income (AGI) from residents moving to other states. That is equal to nearly $2.5 billion over the past two decades. Money leaving the state means less investment in local businesses, less revenue for state and local governments and less being spent on Wisconsin goods and services.

The state’s burdensome tax climate may be to blame for money leaving the state at such an alarming rate. Our analysis compares state tax burdens across the country to see if it is advantageous to move from Wisconsin to a different state.

For example, Wisconsinites are moving to Florida for more than just the warm weather. Florida’s taxpayers do not pay a state income tax, and the average property tax rate is almost half of Wisconsin’s. That means over the period of a lifetime, taxpayers could stand to gain hundreds of thousands of dollars in AGI just by heading to the Sunshine State.

According to the NCPA’s State Tax Calculator, the analysis tool used in this study, a 40-year-old married couple who owns a home and earns $75,000 a year would gain $223,735 over the rest of their lifetime if they moved to Florida from Wisconsin.

Southern states are not the only ones to hold a tax advantage over Wisconsin. That same couple would be better off in Iowa, Michigan and Minnesota. The only neighboring state that has a worse tax climate for this couple is Illinois.

While Wisconsinites can celebrate that the tax climate is better than our neighbors to the south, the Land of Lincoln’s flat income tax of five percent is lower than most of Wisconsin’s rates. However, Illinois’ average sales tax rate is a staggering 8.16 percent compared to Wisconsin’s 5.43 percent and property tax rates are similar between the two.

The State Tax Calculator shows us that a single 25-year-old earning $30,000 is better off in Wisconsin than Iowa, Illinois and Minnesota. But, as this taxpayer earns more and purchases a home, it is actually advantageous to move to Iowa or Minnesota.

Essentially, the state is penalizing taxpayers for being more successful.

With Wisconsin discouraging home ownership and higher income, it is no wonder that $136 million leaves the state every year. If Wisconsin wants to be a national competitor for new businesses, investment and job creation, it must keep reforming its tax code and reduce the overall tax burden.

Read the full report in PDF format by clicking here.