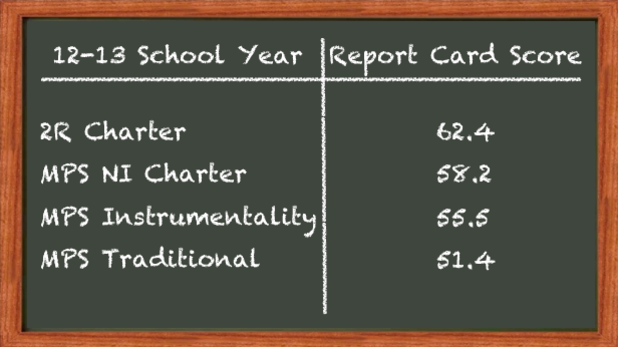 Data from the 2012-2013 school year shows that Milwaukee’s independent 2R charter schools were the city’s most effective schools when it came to important metrics like student growth and closing achievement gaps. The district’s instrumentality charters also performed well, outscoring Milwaukee’s traditional public school average in both student achievement and growth.

Those 2013 School Report Cards – the most recent data available – broke down every public school in the state based on their performance in four separate categories; Student Achievement, Student Growth, Closing (Achievement) Gaps, and On-Track and Postsecondary Readiness. The combination of those scores, minus potential deductions for student absenteeism, dropout rates, and low test participation, is meant to give parents and citizens a more transparent and comprehensive look at performance in Wisconsin’s K-12 schools. Those grades are then matched to one of five grading categories, which break down like this:

Milwaukee’s independent 2R charter schools led the way in all four categories, outperforming their peers in achievement, growth, closing gaps, and postsecondary readiness. These schools held a distinct advantage when it came to closing gaps between groups of students, recording a score that was more than 10 points higher than the next closest type of school.

However, the city’s independent non-instrumentality (NI) charter schools – the ones that are considered part of the Milwaukee School District – did not fare as well. They were the worst in the city when it came to closing achievement gaps, lagging more than 16 points behind their 2R peers. The student achievement score for these schools was also significantly lower than other charter schools in the district. Milwaukee’s traditional public schools had the worst performance in both achievement and growth, according to the state’s report.

These schools turned in differing levels of performance despite educating similar concentrations of economically disadvantaged students. Only Milwaukee’s instrumentality charter schools had a student body that where less than 80 percent of pupils qualified for free or reduced price lunch programs.

The growth numbers are encouraging for students in the city’s charter schools. Measuring a student’s progress during the year paints a stronger picture of the impact that a teacher, classroom, and school has on a child’s learning. While this metric has its drawbacks due to a limited testing suite (the WKCE, which will be phased out in 2014-2015 and be replaced by Smarter Balanced Assessments as well as the ACT for high school students), it is a key factor to understand a pupil’s progress and their ability to catch up, keep pace with, or fall behind the average achievement of Wisconsin’s K-12 students.

Growth scores provide a look at student performance that is independent of where they began the year in a way that base achievement scores cannot be. This way, schools are less penalized for enrolling students that may be entering a grade significantly behind their peers when it comes to raw test results. Ultimately, these scores should be the most important piece of any evaluation of a teacher and his or her classroom.

These School Report Card results give a greater in-depth look at the performance of Milwaukee’s schools. The city’s 2R charter schools show strong advantages over traditional MPS schools in growth and closing gaps, while the city’s instrumentality charters also performed strongly in terms of growth and achievement. While those advantages did not apply to all types of charter schools in the district, it still backs up the WSAS data that show that these schools outperform their peers in reading and math when it comes to state testing as well.