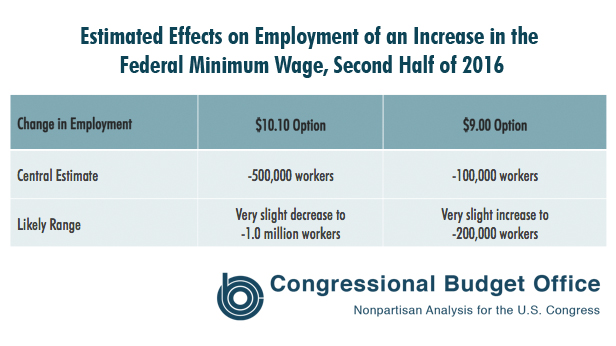 It was no surprise on Monday when the Center on Wisconsin Strategy (COWS), a liberal think tank based at the University of Wisconsin-Madison, released a report that claims raising the minimum wage to $10.10 an hour would create 3,800 new jobs in Wisconsin.

The biased report comes right in the middle of a public policy fight over whether or not to raise the minimum wage.

Laura Dresser, Professor of Labor Economics at UW-Madison and Associate Director of COWS, told reporters on a conference call Monday that, “the weight of the research out there shows that raising the minimum wage has no negative effect on employment.”

I can only assume that Dresser missed the headlines last week when the non-partisan Congressional Budget Office (CBO) released its report that showed 500,000 people would lose their jobs if the minimum wage increased to $10.10 an hour. As a reminder, both Republicans and Democrats trust the CBO when it comes to fiscal policy analysis. My guess is that it would be difficult to find bipartisan support for COWS.

What is surprising, however, is that the media reported on COWS’ flawed study as fact without any mention of the CBO report that was released just last week. It is even more surprising that the media would not attempt to include a differing view on this hotly debate topic.

Alison Bauter, reporter at the Milwaukee Business Journal, ran with the headline “Minimum wage increase would not hurt economy, work force: COWS report.” At no point in her article does she remotely mention other research. I would expect way more from the Business Journal, the self-proclaimed “industry leader covering business news.”

A minimum wage increase would have huge implications on businesses across the state, and it is inexcusable that the Business Journal would ignore the CBO’s findings.

Since the mainstream media failed to do its job by refusing to discuss the CBO report, the MacIver Institute would like to highlight some of its key findings. The COWS report looked at raising the minimum wage to $10.10 an hour in one-year increments, just as the CBO did.

According to the CBO, it is likely that 500,000 people would lose their jobs across the country if the minimum wage made the jump to $10.10. The more frightening data is that it could be as high as one million jobs lost.

Raising the minimum wage reduces employment in two ways, according to the CBO report.

Not only would thousands of low-wage workers be unemployed if the minimum wage is increased, it would end up raising the costs of goods and services. Under this hypothetical situation, thousands of people would lose their jobs and the cost of putting food on the table would also increase. That is lose-lose for the exact people minimum wage increase proponents claim to be helping.

While an increase in the minimum wage may help a select few, the half a million without jobs would probably prefer to keep those jobs.