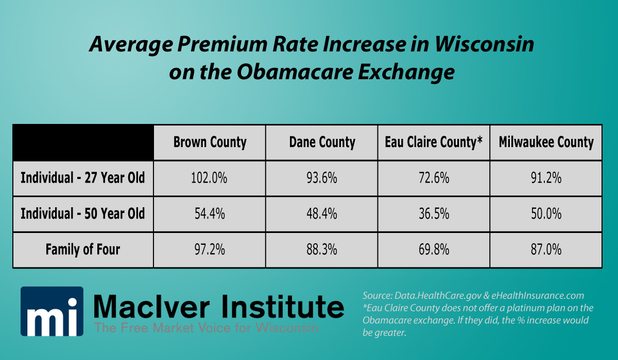 [Madison, Wisc…] Health care rates could increase by as much as 102 percent in Wisconsin under Obamacare according to an analysis released by the MacIver Institute on Friday.

MacIver released data earlier in the week that showed the average health care premiums for three different groups: a 27 year-old, a 50 year-old, and a family of four. The free-market think tank then compared the rates to what these same groups can find on the current private sector market.

Current insurance rates are available through eHealth, a website that allows individuals to search for health insurance from a variety of insurers all in one place. MacIver calculated the average rates available in each group and compared them to data available on the HealthCare.gov website.

The analysis shows that rates will spike, especially for young individuals in Wisconsin.

Eau Claire’s health care rate increases are underestimated, however. While there is a wide range of plans to choose from currently in the northwestern county, no platinum plans – the highest-cost plans available – will be offered on the Obamacare exchange. So, if these plans were offered, the average rate would likely increase even more.

According to the earlier MacIver report, 50 year-olds will have higher premiums on the exchange than 27 year-olds, but they will not see as big a change from what they currently pay.

Families, like younger individuals, will also see spikes that approach triple digits. A family of four in Brown County will see the largest increase at 97.2 percent. That same group in Dane and Milwaukee counties will see increases just under 90 percent, while Eau Claire is the lowest at 69.8 percent.

Dave Jensen, Editorial Director at the health care research organization HCTrends, was not surprised that Obamacare caused this sticker shock.

“The increases are not unexpected given the additional benefit requirements mandated by the ACA and the risk restrictions placed on insurers,” Jensen told the MacIver Institute. “But there will be a surprise to both those who purchase insurance through the exchange and the taxpayers who are providing the subsidies.”

As the glitch-filled Obamacare rollout continues, the one thing that Wisconsinites can count on is that health insurance is becoming more expensive thanks to the Affordable Care Act.