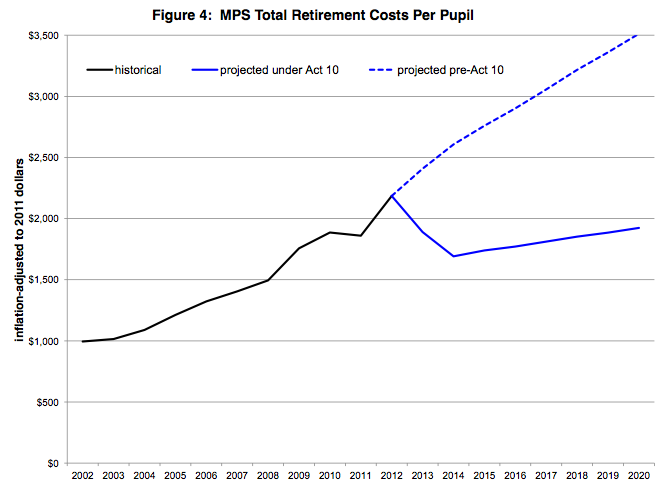 [Madison, Wisc…] Milwaukee Public Schools are expected to save more than half a billion dollars by fiscal year (FY) 2020 according to an in-depth report by the Thomas B. Fordham Institute. The study, which was released Thursday, explains that Act 10 gave MPS the flexibility to make these cost-saving changes.

The MacIver News Service reported on the initial release of the Fordham Institute’s report, The Big Squeeze: Retirement Costs and School District Budgets, back in June. The report looked at three similar schools districts in the country: Cleveland, Philadelphia, and Milwaukee.

The original report showed that MPS would be on track to save $101 million in FY 2020 thanks to the reforms put in place by Act 10, which is confirmed in the follow-up report.

The Fordham Institute released a full analysis, Milwaukee: Saved by Act 10…For Now, on Thursday that takes a more in-depth look at MPS. The study shows that without Act 10 reforms MPS would have to make massive budget cuts. These cuts would dramatically reduce teacher salaries and the district would have to fire numerous teachers and administrators.

With Act 10 reforms in place, Milwaukee is on pace to save $1,056 per student in retiree health care costs in FY 2020. These savings also applied to the city’s pension fund for educators. Even with inflation, per-student costs for this retirement fund are slated to drop from $1,029 for each pupil to $845. When you add in the projected costs of these programs before the recent reforms, this comes out to an annual savings of $1,588 per pupil by FY 2020.

Robert Costrell, an author of the study and Professor of Education Reform and Economics at the University of Arkansas, spoke with the MacIver News Service (MNS) about the report. Costrell says that the skyrocketing retiree costs at MPS were “a ticking time bomb” and Act 10 reforms will serve as a temporary fix to the problem.

One of the main issues facing MPS, and other school districts across the state, is that many school employees retire earlier than normal and the district pays for retirees’ health insurance until Medicare takes over at age 65. “Wisconsin is no different than anyone else in this regard in that it is very common [for school district employees] to retire in their fifties,” Costrell told MNS.

The University of Arkansas professor said that Act 10 reforms allowed the district to make changes to retirement benefits without going through the collective bargaining process. In December, the finance committee of the Milwaukee school board recommended that retiree health insurance not be offered to new hires, but the full board has yet to make a final decision.

While Act 10 has made huge strides to help MPS, the report explains that the Budget Repair Bill is only the first step. MPS has current employees pay for the retirement benefits of current retirees, using a pay-as-you-go, or pay-go, system. The Fordham Institute fears that this may be reaching a critical mass where current employees will not be able to cover the retirees’ cost.

“To be sure, MPS is not out of the woods yet. Its pay-go policy on retiree health means that the cost of obligations incurred to current employees is being postponed. The cuts MPS has enacted to district costs for retiree health have bought the system time, but further action may still be required,” the report says.

Costrell told MNS that MPS has recognized this problem and started a fund that will put aside money for future retirees in what he called “a mainly pay-as-you-go system,” but the district is not banking nearly enough.

“As a general principle, you should be paying for the future benefits of your current employees today,” said Costrell. This would create a higher cost now for the district and employees but would ensure there is no budget crisis in the future.

As MNS reported previously, Act 10 has saved Wisconsin school districts nearly $2 billion since it was signed in 2011.

The full report from the Fordham Institute can be seen here.