Revenue limits affect the total amount of revenue, including general school aids and property taxes (but not including categorical aids or special education aids) that schools can take in annually. And so, when state aid is increased to school districts, revenue from property taxes must be reduced. Gov. Evers wanted to increase the revenue limits by $200 per pupil in FY22 and $204 per pupil in FY23. The Legislative Fiscal Bureau estimated that could have increased property taxes by $510 million over the biennium, but that it would be offset by an increase of $612 million in general school aids.

Levy limits directly impact property taxes, since they dictate the amount of taxes a government can collect. Every year municipalities, counties, and technical colleges get to increase that levy limit depending on how much new construction occurred over the previous year (called Net New Construction or NNC). The minimum increase allowed is 0% (even if there was more destruction than construction.) Governor Evers wanted to increase the minimum to 2%.

LFB estimated that change would raise levy limits by $33.3 million in FY22 and $31 million in FY23. That was based on extrapolation using historic data since 2014.

The MacIver Institute conducted a thorough analysis of every Wisconsin municipality, its most recent NNC rate, and how much it collected in local, county and tech college property taxes. MacIver then calculated how taxes in each of those 1,911 municipalities would change under Evers’ proposal to raise the minimum NNC adjustment to 2%. The result was an annual $40.8 million increase in property tax levy limits under Evers’ proposed budget.

That’s not all. Right now, when a municipality decides it no longer wants to provide a service, it’s levy cap decreases by the amount saved. For example, towns sometimes turn to counties or neighboring communities for police and ambulance service. Gov. Evers wanted to change that rule, so communities could discontinue services, but keep on taxing for them.

LFB determined this would increase levies by about $700,000 a year. However, it’s impossible to know the true impact of the policy change, because it would provide a new incentive to drop local services. Also, it would not actually increase levies. It technically decreases levy reductions by $700,000. Local taxpayers wouldn’t see bills go up from the change, but they would see local services dwindle, as they continue to pay for services that don’t exist.

As far as levy limits are concerned, these exemptions were attempts to allow local government to collect as much property taxes as possible off the books. Each one of those items in the governor’s budget would have meant higher property tax bills. The Legislature said no to all of them, but don’t let your guard down yet.

One top Republican goal in the state budget was to minimize policy decisions, which would presumably include levy limit changes. Three Republican bills enabling higher property taxes were passed at the end of last session – separate from the budget.

The Bottom Line on Property Taxes

Altogether, LFB estimated the total net property tax amount under Gov. Evers’ budget would have increased by $512.3 million. It is still estimated to increase by $55 million under the Legislature’s budget. For a median value home, the governor’s plan would have increased property tax bills by $22 next year and another $63 the year after that, for a total increase of $107 over the biennium. The Legislature’s budget decreases bills by $101 next year and then increases them by $32 the year after that. The total impact for a median-valued home is a net-decrease of $170 over the biennium.

That tax cut is supported, in part, by a $105.5 million boost in the Lottery and Gaming Credit. That’s not thanks to anything the Legislature did. People were gambling a lot last year during the lockdown. 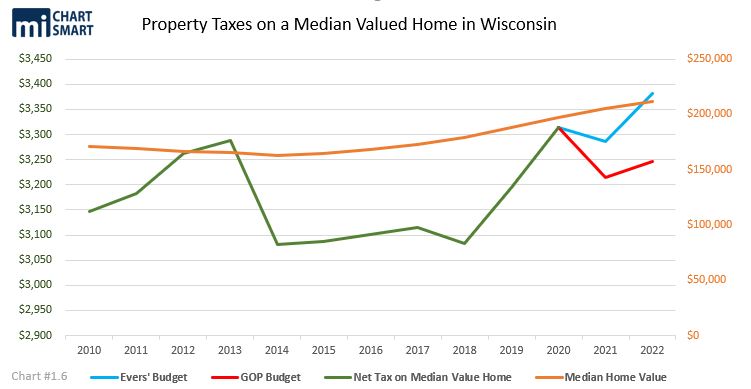 When it comes to shared revenue with local governments, the Legislature made a significant cut. Locals will get an actual cut of $267,230,400 in state aid. That’s a decrease of 4.3% from the last budget. Evers wanted to cut aid by 3%.

Even with that extra $2.3 billion in federal aid, the budget debate included no shortage of partisan political demands for even more spending at the local level. At one point during the JFC hearings, Democrats introduced a motion to increase County and Municipal Aid by $45.4 million over the biennium. Rep. Goyke claimed that would have lowered property taxes, but that’s not necessarily true.

More state aid to local governments has no effect on their ability to levy property taxes. That’s because, remember, local governments have levy limits – not revenue limits. Taxes would only go down if local governments decided to lower them. That would make sense, because they’re so flush with cash right now. We’ll see what they decide to do over the next two years.