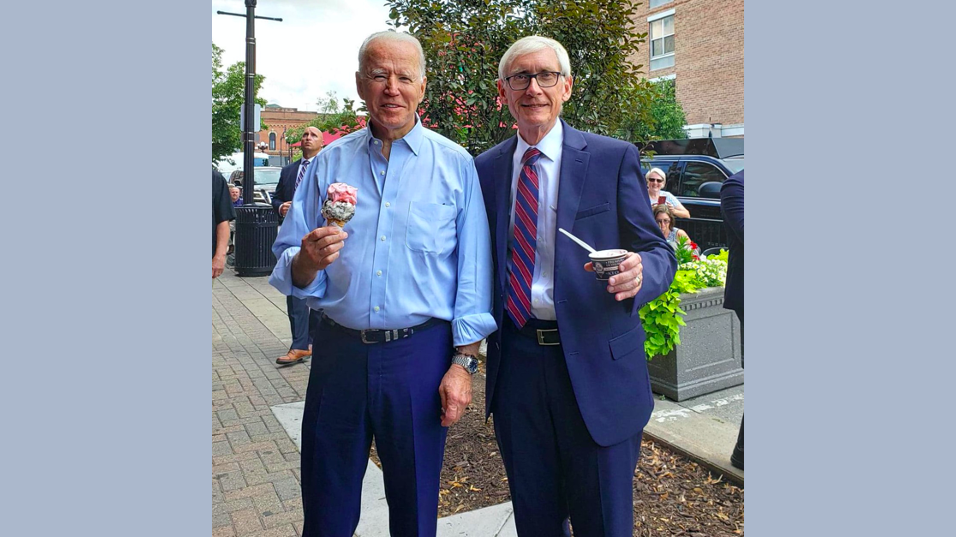 President Biden was eating ice cream with Wisconsin’s governor and Democrat senator while 200 miles away a city is in crisis because of the disastrous policies the three of them put forth.

In what may be the most fitting metaphor for Democratic leadership in Wisconsin, just a few hours before President Joe Biden, Governor Tony Evers, and Senator Tammy Baldwin stopped for ice cream in La Crosse, 200 miles away in Milwaukee thieves were stealing tools off a fire truck as firefighters rescued a family from a house fire.

It would stand to reason that Biden, Evers, and Baldwin would want to be nowhere near a Democrat-run city that is so utterly dysfunctional, so these three Neros snacked on cookies and cream while Milwaukee burned in the fire their policies sparked.

So unafraid of consequences in a city that just last year defunded its police department and illegally fired its tough-on-crime police chief that thieves took firefighting equipment in broad daylight just feet from first responders and law enforcement officers without any fear whatsoever of consequence.

Why would they?  Democrats in Milwaukee have made it clear for years that there are no meaningful consequences for criminal behavior, and now the city—like nearly every other Democrat-run metropolis—is reaping what it so foolishly sowed.

On the day of Biden’s visit, Milwaukee saw a shooting at its downtown Hilton Hotel, a 16-year-old boy charged with two separate murders, a father sentenced in the murder of his five-year-old son over a piece of cake, a man charged in a deadly hit and run crash, and a theft of $3,000 worth of equipment from the We Got This community garden.

In Milwaukee in 2021, someone is killed every 1.8 days and someone is shot every 10 hours.

Water Street, the city’s most popular bar and entertainment district, is now the site of shootings and car thefts each weekend while its mayor orders police officers to stand down over fears of the backlash to mass arrests.

Even if there were actually arrests made or municipal citations handed out, Milwaukee’s walking disaster of a city attorney would likely drop them like he did curfew tickets issued during widespread rioting last year.

In Milwaukee in 2021, someone is killed every 1.8 days and someone is shot every 10 hours.

Milwaukee has every appearance of a failed city, from its skyrocketing crime rate to its utterly worthless excuse for leadership, and it thus makes sense that President Biden would want to avoid it as surely as his Vice President avoided the southern border.

On Friday, after 94 days of stalling, Kamala Harris finally traveled to the border…kind of.  She went to El Paso; a city roughly 800 miles away from the crisis area of McAllen, Texas where Biden Administration policies prompted a massive surge in illegal immigration and led to a humanitarian crisis.

This was shrewd, cynical politics: Harris could quiet critics by saying she went to the border, but she never had to come face-to-face with the horror Democrat policies have wrought.  Biden, too, wants nothing to do with Milwaukee, which like the border has descended into chaos on his watch, so instead he got ice cream 200 miles away in La Crosse.  He went to Wisconsin, but he deliberately avoided the most pressing issue facing Wisconsin.

From 2019 to 2020, only two cities in the United States saw larger increases in their homicide rates than Milwaukee and Madison, which has also seen a troubling rise in overall crime over the past two years.  Madison hasn’t had a Republican mayor since 1973.  Milwaukee hasn’t had one since 1908.

Both are prime examples of the urban decay that results from decades of soft-on-crime liberalism and culminates with a radical left-wing war on police.  Ironically, Biden—whose 1994 crime bill helped reverse years of rising crime rates—has led the charge on the idea that the justice system itself is racist and that putting criminals in prison is somehow racist.

“We have to come together to rebuild trust between law enforcement and the people they serve [and] to root out systemic racism in our criminal justice system,” he said during April’s address to a joint session of Congress.

This is utter nonsense; and believing it—as both Biden and Evers apparently do—foments a desire to set policy that keeps as many people out of the supposedly racist justice system as possible. This means fewer arrests, fewer criminal charges, fewer convictions, and fewer prison sentences.

This also means more robberies, more rapes, more shootings, and more murders, as Milwaukee knows all too well.  If anything is racist, it’s the fact that leaders like Biden, Evers, and Baldwin care so little about black lives that they seem to be perfectly content with a city in which 85 percent of the shooting victims are African-American.