Local taxes in Wisconsin always go up no matter who’s in charge, but it’s usually done in a way that’s obscure, incremental and deniable. Not so with Gov. Evers’ new budget proposal.

In a preview of his budget address earlier this year, Evers announced he wanted to let local governments create their own sales and use taxes because they have “been doing more with less for far too long.”

Currently, the sales tax for state government in Wisconsin is 5%, but counties are allowed by vote of the board to tack on an additional 0.5%. Almost all County Boards have voted for a higher sales tax, which means in 68 out of 72 counties, the sales tax is 5.5%.

Gov. Evers wants to allow counties to add on another 0.5%, as long as voters agree in a referendum. He also thinks municipalities with populations over 30,000 should be able to get another 0.5%, again pending a referendum vote. These changes would mean a potential sales tax of 6.5% in parts of Wisconsin.

The Governor believes that Wisconsin should raise taxes to make them more comparable with neighboring states.

“[Wisconsin] has the lowest sales tax among its Midwestern neighbors,” according to Evers. “Among the 36 states allowing local general sales taxes, Wisconsin has the 6th lowest reliance as a percent of personal income.”

When making this tax comparison amongst states argument, the Governor fails to mention how our major taxes – individual income, corporate and property taxes – compare to other states. Wisconsin Manufacturers and Commerce pointed out in response to Evers’ sales tax plan, Wisconsin has the 11thhighest income taxes, the sixth highest property taxes, and the 17th highest corporate income taxes in the country.

The taxpayer-funded lobbyist organizations, League of Wisconsin Municipalities (LWM) and the Wisconsin Counties Association (WCA), both immediately signaled their support for the tax hike. They suggested it would mean property tax relief.

“For too long, counties have been forced to rely on property taxes to fund local services and state mandated programs,” according to WCA Executive Director Mark D. O’Connell. “Today’s announcement from Governor Evers gives local taxpayers a voice in how they prefer to pay for services and is a recognition that Wisconsin must begin addressing its over reliance on property taxes.”

This argument that the government needs to raise taxes in order to lower taxes rarely pans out. The original 0.5% sales tax add-on for counties was also created in the name of property tax relief. 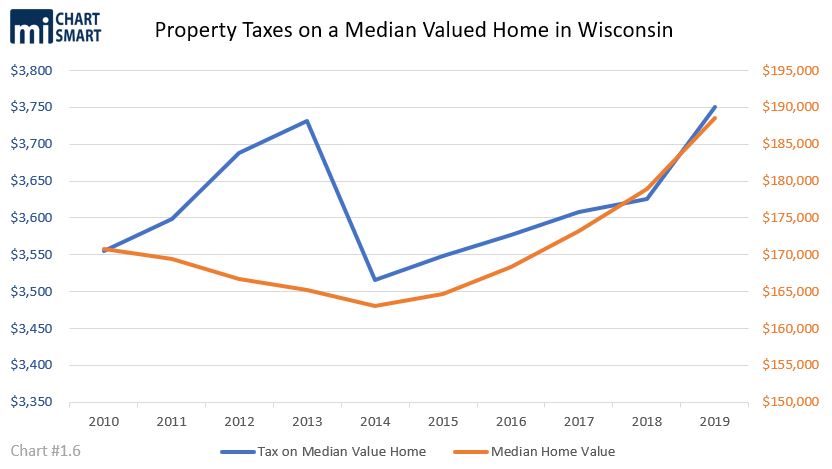 No matter what politicians tell you, property taxes in Wisconsin always go up.

It’s easy for them to claim otherwise, because few people understand how property taxes are calculated. (MacIver produced this video last year to shine a light on some of the ins and outs of property taxes.)

For example, as property values in Wisconsin have exploded in recent years, the tax “rate” has dropped, and yet tax “bills” continue to grow. Politicians still claim that property taxes have dropped by pointing to the decreasing rate.

The state created “levy limits” in 2005 to try to protect local property taxpayers from out-of-control local spending. These spending limits go up every year based on Net New Construction (NNC). That’s a percentage calculated by comparing the value of new construction in a community with the previous year’s total equalized value.  The tax levy is allowed to increase by that percentage for the next year. The idea is that a local municipality will need to increase taxes at the local level to pay for the services provided to new residential homes or businesses. If a local community does not grow, it cannot increase taxes under the current NNC levy limits.

The average NNC for Wisconsin municipalities in 2020 was 1.17%, and municipal taxes totaled $7.4 billion in 2019. Under current law, tax levies across the state would grow $86.5 million.

Under Gov. Evers’ budget, they would grow $147.9 million. That’s a $61.4 million tax hike, almost 71% higher than current law, which is not tied to new construction. Also, that’s for just one year and just for municipalities. Property taxpayers would get hit from multiple angles from different local units of government.

In 66 out of 72 counties, NNC for 2020 was below 2%. Under Evers’ budget, taxes in those counties would increase an extra $15 million. Evers would also give 2% increases for Tech College Districts, which have no elected oversight.

Local governments say they never have enough of your taxes to spend, and the levy limits are the main reason why. One way to get around the levy limits is to keep some income off-the-books. These are called “levy exemptions.”

The largest exemption is debt service. Local governments don’t need to hold referendums to borrow money and they don’t need to dip into their operating budget to pay it back. They get to raise an additional debt levy that’s rolled into your property tax bill. Statewide this grows around $50 million every year.

In 2019, local governments collected almost $900 million from property tax payers above and beyond their levy limit, according to the Department of Revenue.

There are various other, small exemptions, too. Every single one requires property owners to make up the difference in the local tax levy. Again, because so few people understand property taxes, local politicians always push for new levy exemptions and state lawmakers usually go along. Even Gov. Walker, the state’s biggest property tax freeze advocate ever, agreed to create a levy exemption for higher property taxes in his last budget.

Every time there’s construction in a Tax Increment Finance (TIF) district, property taxes go up. That’s because TIF construction increases the local tax levy, but TIF districts don’t pay taxes to that levy – so everyone else within that municipality has to “chip” in to make up the difference.

That being said, Gov. Evers wants to allow communities to fund “workforce housing” with TIF. Residential projects in TIF districts are especially burdensome on property taxpayers, because of the taxpayer funded services they require but don’t pay for.

Government subsidies for “workforce housing” is also anti-free market. Without those subsidies, businesses would be forced to pay their employees a wage that allows them to live within commuting distance of work. By subsidizing “workforce housing,” the government is subsidizing low wages – in addition to promoting high property taxes.

Gov. Evers says all these local tax increases won’t affect homeowners because he’s going to stick it to local businesses by closing the “Dark Store Loophole.”

The current property tax system is set up so businesses pay property taxes based on the real estate value of their property – just like homeowners. Closing the “Dark Store Loophole” means local governments would tax businesses based on how much money they make at that property. Even though tax collectors would continue to call this a “property tax,” it’s really a new local business tax. There is currently a case before the State Supreme Court on the dark store tax question. 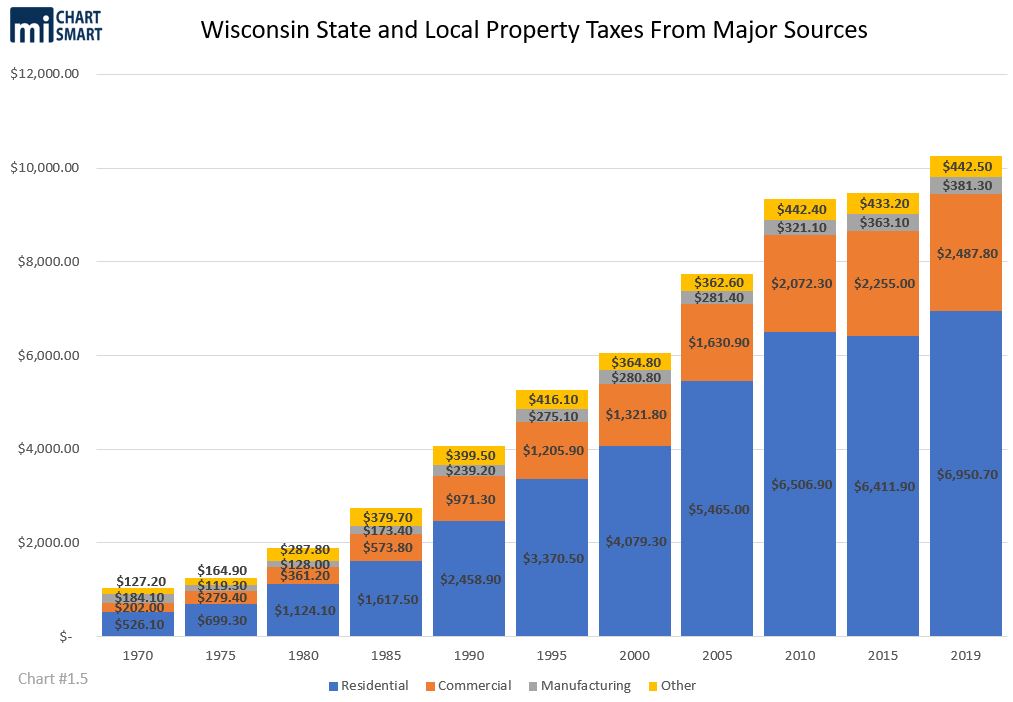 Just like local governments, school districts in Wisconsin are not allowed to tax as much as they’d like. Rather than limits on their tax levy, however, the state limits their total revenue. This really frustrates the education establishment, who believe it is never enough when it comes to education spending and are not concerned about how local taxpayers will pay for huge spending increases and higher property taxes. There are, of course, exemptions to the revenue limits that increase your local property tax bill. Referendum spending is the most obvious one.

Gov. Evers wants to increase the revenue limits by $200 per child in FY22 and then another $204 in FY23. He then wants the revenue limit to increase automatically every year based on the Consumer Price Index. Those changes result in property tax increases, but he also wants to increase state funding. It is impossible to know, at the moment, what the final impact would be on property taxes in the immediate and long term future.

Conclusion – Gov. Evers Is Increasing Property Taxes At Every Level

Not surprisingly, but unfortunate nonetheless for taxpayers, Gov. Evers’ budget does not calculate the total impact of these new tax increases.

Gov. Evers had similar provisions in his 2019-21 budget proposal. The Legislative Fiscal Bureau estimated at the time that these changes would have increased property tax bills by hundreds of dollars. The MacIver Institute will update this analysis with an estimate of the impact the Governor’s policy changes will have on your wallet and your family’s checkbook as soon as possible.