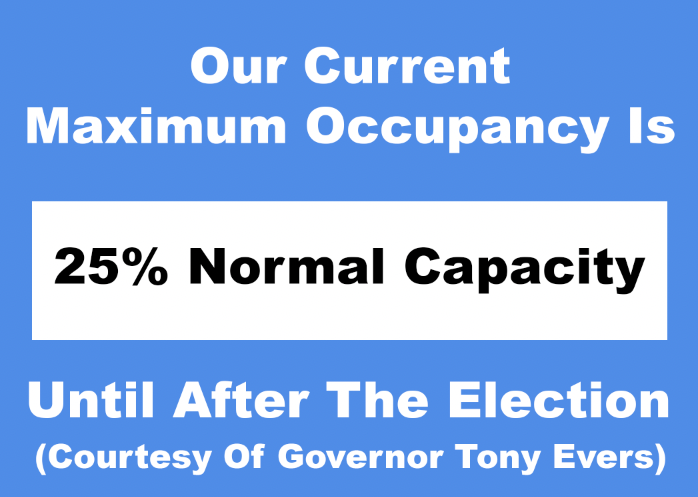 With his latest emergency order set to expire three days after the election, Governor Evers is making an implicit threat: “You can go back to your precious bars and restaurants…just as soon as I’m sure you’ve voted the right way.”

Governor Evers probably could have made it a little less obvious.  By scheduling an end to an emergency order limiting bar and restaurant capacity three days after Election Day, he made it abundantly clear that Wisconsin could have its social life back as soon as he was sure it voted the right way.

From 8:00 am Thursday morning until November 6th, “public gatherings are limited to no more than 25% of the total occupancy limits for the room or building, as established by the local municipality.”

“For indoor spaces without an occupancy limit for the room or building that is established by the local municipality, such as a private residence,” the order continues, “public gatherings are limited to no more than 10 people.”

The Evers Administration has seemingly learned its lesson from the Wisconsin Supreme Court decision that struck down its “Safer at Home” order in May as well as a recent Michigan Supreme Court decision invalidating much of Governor Gretchen Whitmer’s draconian overreach: The new order might as well include the phrase “Please do not sue.”  Exempted from it are “churches and other places of religious worship” as well as “political rallies, demonstrations, and other speech protected by the First Amendment.”

Evers knew that the easiest way for his order to be invalidated would be for it to interfere with protected speech or the free exercise of religion, so he avoided the headache altogether and simply exempted the lowest hanging fruit for Republican lawyers.

Just about the only entities that Evers didn’t exempt are restaurants, bars, and retail stores—the very businesses hardest hit by his last shutdown in March.

“This could be the final dagger for the restaurant industry,” bar and restaurant owner Bobby Wiltgen told the Milwaukee Journal Sentinel.

It doesn’t have to be, and there doesn’t even need to be a lawsuit.  Republican lawyers need not craft complex arguments about assembly and association rights; Republican legislators simply need to act.  Wisconsin Statute 323.10, which grants the Governor the power to declare public health emergencies, also provides that they may “be revoked at the discretion of either the governor by executive order or the legislature by joint resolution.”

The Legislature’s Republican majority, however, has been unwilling to rescind either the current emergency declaration issued on September 22nd or the one that immediately preceded it, which went into effect on July 28th. Legislative leaders said at the time that it was politically unwise to so publicly strike down what have been passed off as COVID-19 safety measures, and by timing his new limit on bar, restaurant, and store capacity to end just after Election Day, Governor Evers is all but daring them to act.

This is a sadistic game of chicken, and hundreds of businesses will end up being run over

He clearly believes that Republicans, fearful of alienating older voters who overwhelmingly support mask mandates and restaurant crowd limits, wouldn’t dare to take such a bold vote so close to the election.  Conversely, by allowing his order to end three days after Election Day, a Republican lawsuit would not be settled before the election; leaving the Legislature with the only option of passing a joint resolution if it really wants to save an already-reeling service industry.

There is simply no evidence that either restaurants and bars or retail stores have driven the COVID-19 outbreak, as many retailers never closed during Evers’ first shutdown and restaurants and bars have been open without incident since mid-May.   Evers’ strategy with this move is thus threefold: Make a half-hearted gesture to show he’s trying to do something to get Wisconsin’s current outbreak under control, dare Republicans to damage themselves politically by stopping him, and make a veiled threat to voters that their lives will only get back to normal after Election Day.

This is a sadistic game of chicken, and hundreds of businesses will end up being run over by a Governor who still hasn’t quite gotten the hang of this whole tyranny thing.  If Wisconsin’s outbreak is such a dire, life-threatening emergency, then shut down the entire state.  Declare another 15 days—or weeks, or months—to slow the spread and shut everything down until things are under control.

If, however, Wisconsin’s outbreak is so controlled that practically every entity save for restaurants, bars, and stores can stay open at full capacity, then there was no need to issue this emergency order in the first place.

Governor Evers’ move, then, is nakedly, unashamedly political; designed to test his opponents and further punish voters into believing that it’s time to elect a new president.  It is at once unnecessary, unethical, and unstoppable…unless, of course, Republicans in the Legislature finally summon the courage to do so.