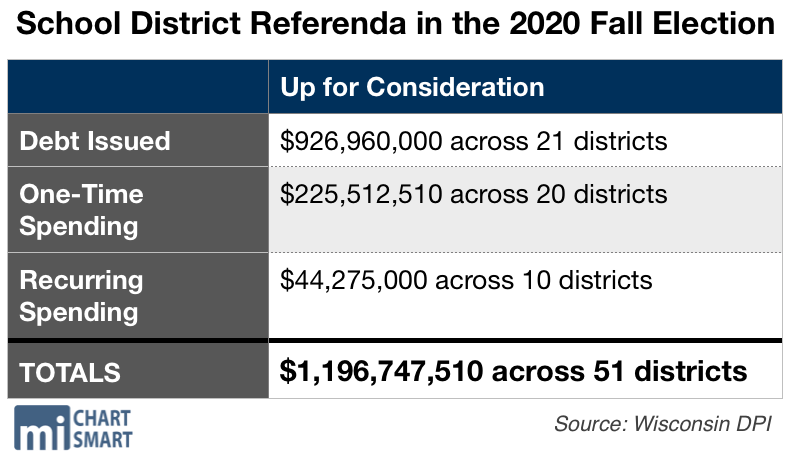 Voters will consider nearly $1.2 billion in property tax increases in the November election, thanks to school district referenda. Taxpayers in 41 school districts across the state will consider a total of 51 questions on their ballots for projects ranging from brand new buildings, upgrades to existing facilities and permission to spend beyond state-imposed property tax protections and

The vast majority of the referenda, totaling $925 million, would issue new debt. Twenty-one different referendum questions across the state will ask taxpayers to issue new debt for various school projects.

According to the Department of Public Instruction (DPI), 77 percent of the referenda up for vote will issue debt directly to taxpayers. Another 19 percent are non-recurring or one-time increases on district spending caps, while recurring increases to spending camps make up the remaining 4 percent.

Of the districts asking to issue new debt, the Madison Metropolitan referendum question is by far the largest. Madison voters will consider whether to issue $317 million in debt to build a new elementary school, combine Madison High East and West into a single school, among many other renovations and improvements.

Recent reports show enrollment in the district fell by more than 1,000 students in the last year.

If approved, the new debt obligation would increase taxes by $50 for every $100,000 in property value. The average single-family Madison home is worth $315,200. Madison is among the ten districts posing two separate referendum questions—one to issue debt, and another to spend beyond revenue limits.

Wausau voters will consider whether to issue $155 million in new debt to build a new elementary school as well as an environmental learning center at the school forest, plus other improvements district-wide.

Oshkosh voters will decide on whether to issue $107 million in new debt to build two new schools and upgrade numerous other buildings.

School districts have state-imposed revenue limits that protect Wisconsinites from constantly-increasing property taxes. However, districts can still ask voters for more by coming to them with referenda during regularly-scheduled primary and general elections.

A non-recurring referendum allows districts to exceed current spending for a set number of years before returning to original levels after the measure expires. Twenty referendum questions will seek to exceed revenue limits on a one-time basis, totaling $225.5 million.

The largest non-recurring referendum question is in Oshkosh, where voters will consider letting the district spend $63.5 million beyond revenue caps for nine years.

Janesville’s referendum question asks voters to increase taxes by $37 million across four years to maintain district class sizes and other programs. Taxpayers in Janesville would see increased taxes each year, since the district would spend $3.5 million beyond revenue caps in the first year, with increases greater each year until it spends $14.5 million beyond the caps in 2024.

Madison Metropolitan, again, will pose the largest tax increase by far, totaling $33 million. That funding would go to expanding programming across the district, with spending increasing each year. If approved, the revenue limit increases would raise property taxes by $27 per year for every $100,000 in property value.

The next largest recurring spending referendum totals $3.5 million in Marshfield, followed by $3 million in Wausau.

Even for voters in districts that do not have referenda on the ballot next month, any spending increases will raise the average level of property taxes statewide.

Over the past year and a half, 80.8 percent of school referenda have passed in Wisconsin, totaling over $2.5 billion.