Speakers at task force meetings described the change as a “return to what the promise was before 2013,” and one that “corrects a wrong.” Click To Tweet

The Milwaukee Public Schools (MPS) school board will vote on its $1.22 billion 2020-21 budget at its May board meeting this week. The board will also consider whether to increase the district’s unfunded pension liability by another $95 million.

“Thousands of us started with MPS and have stayed with PS despite the most challenging years of our careers post-Act 10. Every single member of this committee and the Superintendent should be proud to right the wrong that was done by restoring what was promised: a dignified, achievable retirement formula.”
– MTEA President Amy Mizialko

If approved by the full board, MPS employees hired before June 30, 2013 would be able to retire at age 55 if they have 15 years of service at the district, and have saved at least 70 percent of their sick leave balance.

Under current policy, employees hired before June 30, 2013 are eligible to retire if they are 60 years old, have worked at MPS for 20 years, and have saved at least 90 percent of their sick leave hours.

The change would increase the pension fund’s unfunded liability to more than $1 billion. The district would contribute 5 percent of program contributions, and would also spend $7.9 million every year from 2020 to 2037 to pay for the plan.

Fiscal documents estimate the plan would be fully funded by 2037.

The district is facing a projected $304 million deficit just three years into the future, in the 2023-24 fiscal year.

Earlier this week, the MPS Committee on Accountability, Finance, and Personnel approved an expansion of retirement benefits for MPS employees. Pension and retirement plans would revert back to the district’s generous plan before 2011’s Act 10 and subsequent board reforms in 2013.

In 2017, the board created an “Early Retirement Window” (ERW) that allowed eligible employees to retire during a three-year time period that ends on June 30, 2020. On July 1, the program will end, and the age requirement for health and life insurance benefits will revert to age 60. The board established the MPS Pension and Retirement Task Force in 2019 to study the idea of extending the ERW or making another permanent change to the district’s retirement package.

The Task Force studied three main alternatives and ultimately chose Alternative B—the most expensive of the three—to recommend to the school board. 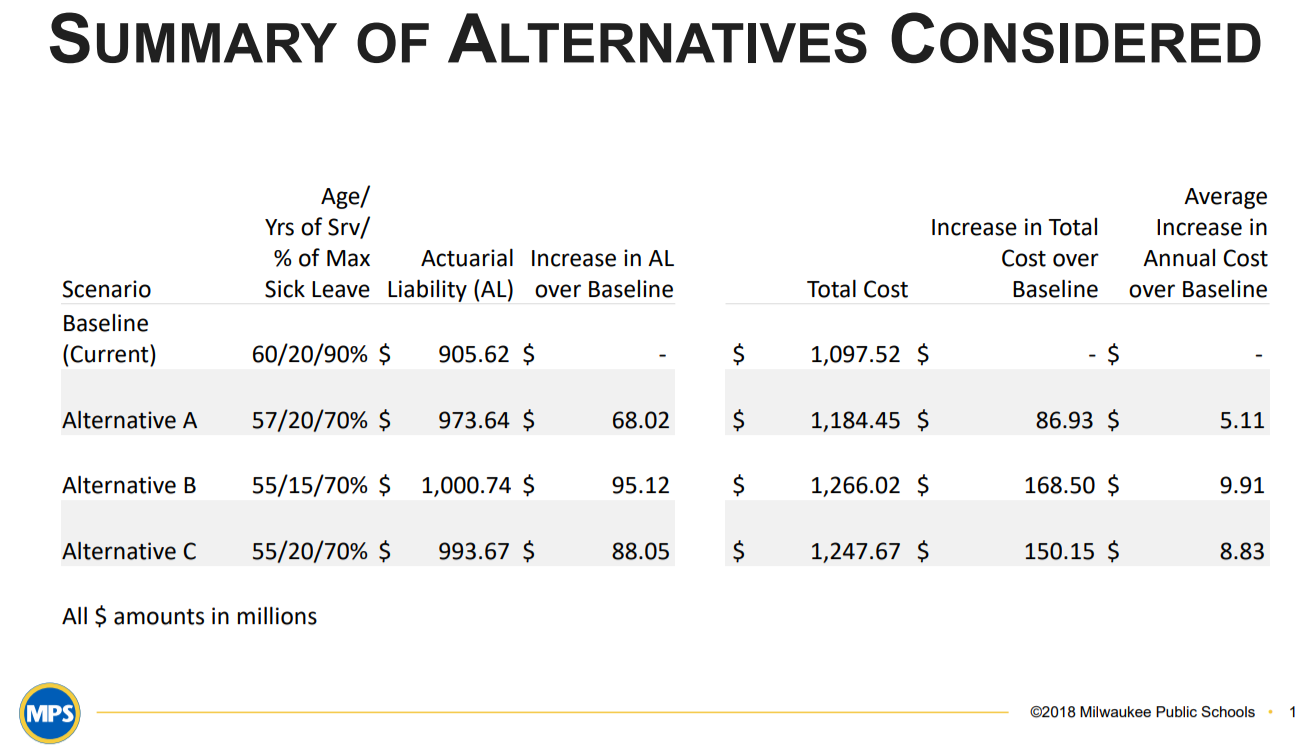 Speakers at task force meetings described the change as a “return to what the promise was before 2013,” and one that “corrects a wrong.”

Before board amendments, the full budget document would spend $2.8 million more than last year’s budget, despite steadily declining enrollment. The budget document projects enrollment for 2020-21 to be 74,966 students across 158 schools.

The budget will also spend the first $57 million of a $87 million referenda dollars voters approved in April. The district will be able to spend property tax caps called revenue limits for four years under the plan.

The largest line item in the proposed referendum budget is $25.5 million in salary and benefits for attracting and retaining staff—a plan the board approved before the referendum vote.

The board will consider the budget and the pension changes at 6:30pm on May 28, 2020. The public can listen to the radio broadcast or watch the live YouTube stream here.