Noting that every campus cannot be “all things to all people,” changes are coming for comprehensive universities

The University of Wisconsin System will pursue efforts to streamline campus operations in reaction to challenges brought on by the COVID-19 pandemic.

The plan, titled “Blueprint for the University of Wisconsin System Beyond COVID-19,” will fast-track many proposals the System had already been implementing in recent years.

One major goal will be to refine the mission of each of the comprehensive universities to provide “greater institutional distinctiveness and identity.” The System will study each program and service offered at each university, analyzing its quality, demand, potential, and cost, while ultimately considering its alignment with the mission of each campus. 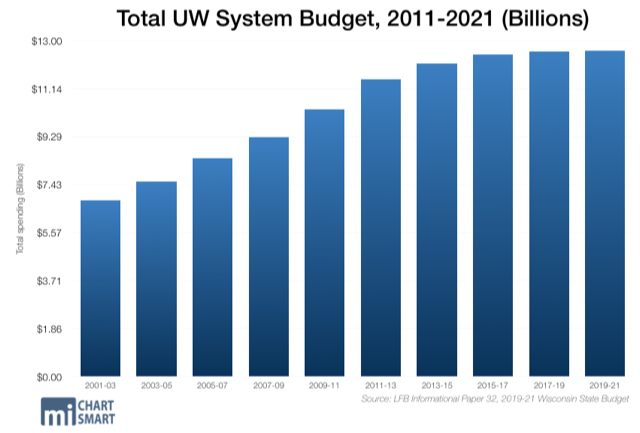 That will result in many System schools becoming more focused toward particular disciplines by ending certain programs and ramping up others, depending on the campus. While the System has studied the idea for several years, it will “aggressively expedite” the process in order to implement it by the fall of 2021. Initial plans are due next January.

The goal is premised on the idea that each comprehensive university cannot continue to be “all things to all people” while staying financially sustainable. Facing demographic projections, workforce needs, and budgetary realities, each campus will work to become more distinctive.

Initial projections showed the UW System would face almost $170 million in revenue losses as a result of the COVID-19 pandemic. Approximately $78 million was sent back to students in the form of housing and dining refunds after campuses shut down in March. The System also received approximately $47 million from the federal CARES Act.

While officials offered ways to save money and improve service in the coming year, they still took the opportunity to deride what they called a declining state investment. The revenue losses are a drop in the bucket compared to the UW System’s overall budget, which tops $6 billion annually. Over $1 billion comes directly from state tax dollars. 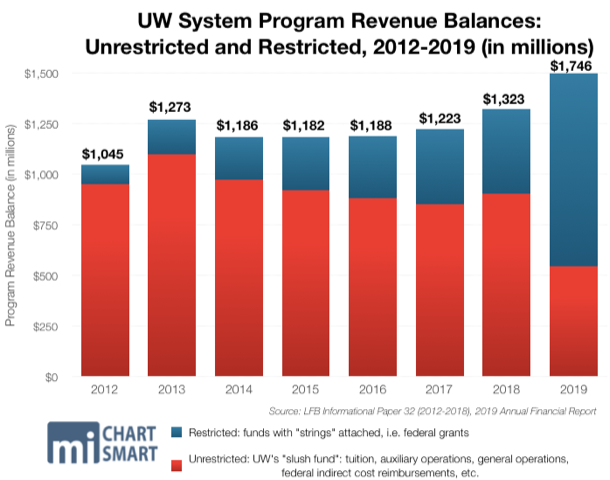 Financial documents also show that the System is still sitting on healthy reserves. The System’s total net position for fiscal year 2019 is $5.4 billion, according to its 2019 Annual Financial Report. 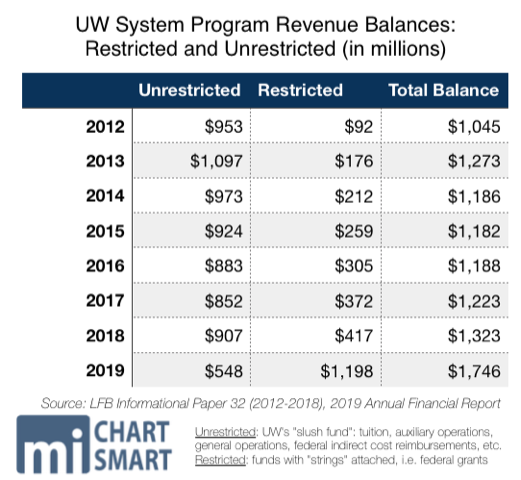 In addition to eliminating program redundancies, the System will consolidate and streamline administrative operational functions including human resources, IT, and business services.

Currently, each System institution runs its own administrative operation, resulting in inefficient and costly services that are inconsistent across campuses. Instead, the plan recommends that System administration immediately begin transitioning to UW-Shared Services, streamlining and standardizing such processes. The process is to be completed by January 2022.

“We must accelerate now, or risk being left behind, perhaps for good.” – Blueprint for the UW System Beyond COVID-19

The plan’s final recommendation calls for a unified, strategic online education delivery model, acknowledging that the sudden conversion to online courses in March “highlighted to necessity to improve the quality, effectiveness, and efficiency” of such programs.

Noting that the UW System has no unified online education strategy, the plan will expand support from UW-Extended Campus to assist campuses in designing online courses. The final prong has the most aggressive timeline, with implementation beginning this summer.

The System has also announced furlough plans for its administrative staff, and each campus has announced its own furloughs. System-wide staff will be required to take one unpaid day per month through June 2021, saving approximately $3 million.