.@GovEvers made a lot of promises on the campaign trail. On Wednesday, he traded in some of those key campaign pledges — Medicaid expansion at the top of the list — for a boatload of new money. #wibudget #wiright #wipolitics Click To Tweet

MADISON, Wis. — Gov. Tony Evers made a lot of promises on the campaign trail.

On Wednesday, the Democrat traded in some of those key campaign pledges — Medicaid expansion at the top of the list — for a boatload of new money.

Republicans have spent the past couple of months in a funding arms race against the Democrat, crafting a big budget that spends big to, as they have acknowledged, keep a full-budget veto threat in check.

At a press event surrounded by cabinet secretaries, Dem lawmakers, and, of course, children, Evers not-so-begrudgingly signed into law an $81.4 billion biennial budget crafted by the Republican-controlled Legislature. The governor made the document a bit more to his liking with 78 line-item vetoes, cutting some GOP initiatives while bolstering K-12 funding by $63 per pupil over the life of the budget.

The Republican budget, Evers insisted, was “insufficient,” and he claims he “strongly considered” vetoing the bill in its entirety “because it did not do enough to ensure our kids and our schools had the resources they needed to be successful.”

But this governor asserts he’s all about putting people above politics.

“Vetoing this budget in its entirety would have been more of the same divisiveness and petty political theatrics that the people of Wisconsin had to put up with for far too long,” he said, taking a shot at Republicans who had controlled both the Legislature and the executive branch up until November, when Evers narrowly defeated two-term Republican Gov. Scott Walker at the polls.

Perhaps Evers was trying to rise above the “divisiveness and petty political theatrics,” but he clearly saw a golden goose opportunity.

Republicans have spent the past couple of months in a funding arms race against the Democrat, crafting a big budget that spends big to, as they have acknowledged, keep a full-budget veto threat in check.

And Evers knows it.

A full veto would have cost his liberal-spending agenda a lot more.

Yet, the Democrat campaigned on Medicaid expansion, building his budget on all of the “free” money that is supposed to come with the Obamacare commitment. Dismissing the myriad problems that have come with the government program, Evers made expanding Medicaid his political line in the sand, threatening to veto any budget that did not include his proposal. His liberal allies egged him on, urging him to outright reject the Republican spending plan.

But then he saw all the money the Republican-led Joint Finance Committee dumped into Medical Assistance, and the governor seemingly made peace with the idea of letting go of his No. 1 campaign promise. He finds comfort in telling himself his first budget, mainly written by Republicans, is merely a “down payment” on his “People’s Budget.”

Besides, the Democrat said, vetoing the entire budget would fail to acknowledge that because of his massive spending plan, “Republicans finally took a step forward in making the investments for progress to occur.”

Republican leadership applauded Evers for signing the budget that they ultimately wrote, a budget that maintains the majority party’s $500 million-plus income tax relief package. The tax-cut lowers individual income tax brackets over the next two years. The Republican plan also didn’t include a gas-tax hike, something Evers said was critical to transportation funding. 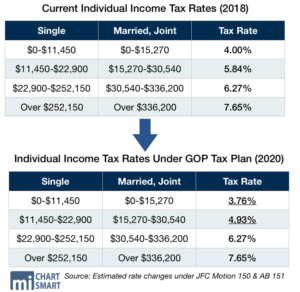 Republicans, however, are not happy with Evers’ vetoes.

“This conservative budget crafted by the Republican legislature deserved to be signed into law, but without the political, partial vetoes,” Assembly Speaker Robin Vos (R-Rochester) said in a statement. “These vetoes remove dollars from important programs, give more spending authority to government bureaucrats, and allow people to cheat the system by not following the welfare reforms we passed.”

“Because of his partial vetoes, he’s starving programs that incentivize work, undermining their implementation and skirting the law. We know people support drug testing and work requirements for welfare recipients and this budget ignores that fact,” the speaker added.

The governor axed a $2.5 million controversial mileage-based fee and tolling study for the Department of Transportation. Critics were concerned about the original language of the measure, which gave the Joint Finance Committee authority over recommendations from the study.

Evers also vetoed out a provision that would allow Tesla to sell cars directly to consumers. That idea, while a good reform, was introduced in a last-minute amendment to secure the vote of Sen. Chris Kapenga (R-Delafield).

The governor signed the 2019-21 budget just three days after the last two-year budget expired, curtailing what could have been a long and contentious summer budget battle.

It’s clear Republican leadership believes they collected a win in the final budget, despite Evers’ vetoes. The governor signed the 2019-21 budget just three days after the last two-year budget expired, curtailing what could have been a long and contentious summer budget battle.

“There’s a list of items but none of them jump out so significantly to me that you can make the case that he significantly changed the document that we passed on the floor of the Assembly and Senate last week,” he said.

“I am pleased today to see Governor Evers celebrate many of the record investments made by my Republican colleagues,” said Sen. Alberta Darling, co-chair of the Joint Finance Committee, in a statement.

Darling pointed out the irony of Democratic lawmakers celebrating the budget the governor signed.

“I hope the Democrats who stood behind the Governor today but voted ‘no’ on many of the items in this budget will reflect on the many shared priorities the governor approved. Whether a Republican or a Democrat sits in the Governor’s office, I will fight to protect taxpayers and make sure every budget is responsible and sustainable,” Darling said.

Scenes from today: MacIver was there as @GovEvers signed the 2019-21 state budget with a list of partial vetoes. Keep an eye out for our analysis of the vetoes, coming soon. #wibudget #wiright #wipolitics pic.twitter.com/b9qsTGzc1L