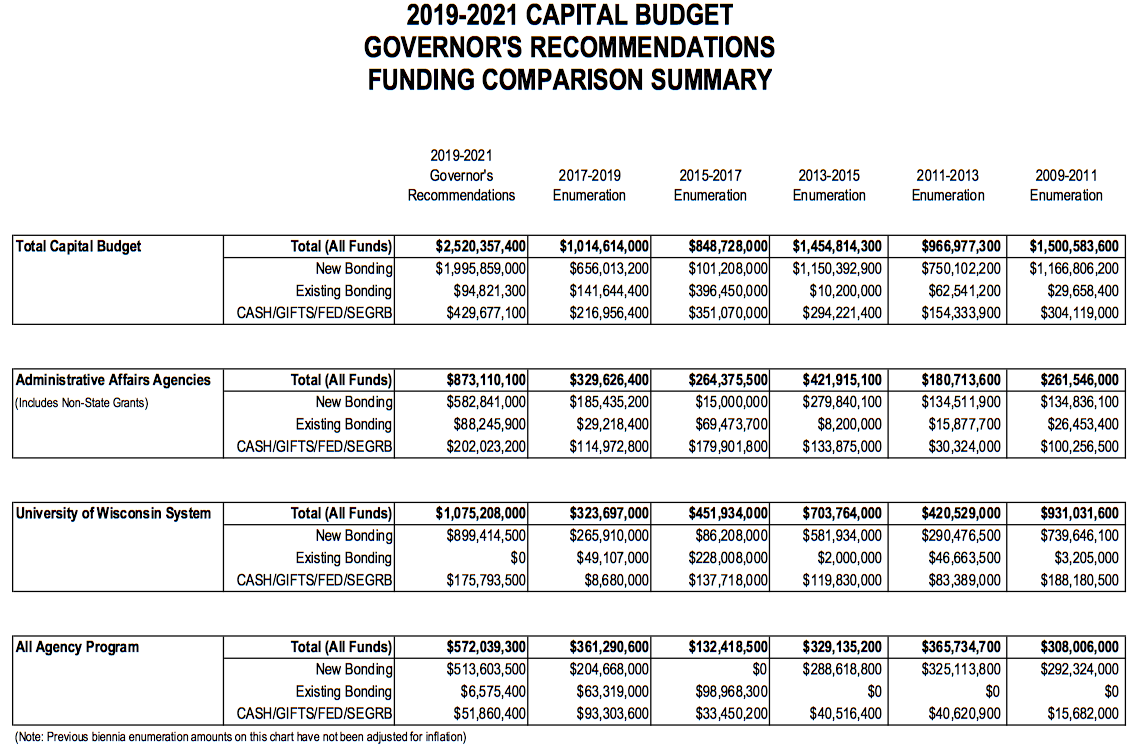 MADISON, Wis. — One week after Gov. Tony Evers unveiled his hefty $83.5 billion biennial budget proposal, the Democrat announced his recommendations for some $2.52 billion in state capital improvement projects for the next two years — 1 1/2 times more than the $1.01 billion enumerated in the previous budget.

Evers seemed loathe to say no, signing off on many of the approximately $3.4 billion in requests made last fall by state agencies.

Just two weeks ago, Evers bragged that he brought new transportation bonding down to $329.1 million from Gov. Walker’s $402.4 million in the last budget.

“Wisconsin’s highway bonding in our budget is the lowest it’s been in over 20 years. It’s time we pay our bills and stop kicking the can down the road,” Evers said during his budget address.

“It will be interesting to see what we do as a body and how we prioritize because the governor has prioritized everything. And when you prioritize everything, you prioritize nothing because we don’t have unlimited resources,” state Sen. Dale Kooyenga (R-Brookfield) said. “We need to do due diligence on behalf of the taxpayers.”

Evers’ first capital budget request next goes to the State Building Commission and then the Republican-controlled Legislature’s Joint Finance Committee.

Evers seemed loathe to say no, signing off on many of the approximately $3.4 billion in requests made last fall by state agencies.

This bar graph shows how much Gov. Evers is proposing to borrow for capital projects in the 2019-21 #wibudget compared with previous budgets. #wiright #wipolitics pic.twitter.com/cI6cpQaSrb

The governor recommend $1.075 billion of the total $1.96 billion in borrowing the University of Wisconsin System sought in major project requests — from nearly $130 million for a UW-Milwaukee chemistry building to a $92 million project to replace UW-Madison’s gymnasium/natatorium. Nearly $400 million in bonding would be funded through program revenues, generated by student fees and other funding sources.

“We appreciate that the Governor recognizes many of the challenges in facility repair, renovation, and replacement that the University of Wisconsin System is facing,” System President Ray Cross said in a press release. “Our challenges are significant as we seek to update antiquated buildings and systems to ensure the safe and modern learning environment students expect.”

Cross noted that the the UW System is the largest owner of physical space in state government.

Kooyenga, chairman of the Assembly Committee on Universities, Technical Colleges, Children and Families, said the UW System is among the state’s greatest assets but the Legislature must weigh the system’s funding requests versus the realities of technology and population declines.

“More education is being delivered remotely, so now more than ever … we could harness technology to use less bricks and mortar, to be smarter with our space, as opposed to always saying we have to build, build, build,” the senator said.

The Department of Administration, for instance, sought nearly $100 million for a new state office building in Milwaukee. Evers signed off on the borrowing, which would finance the construction of a 200,000 gross-square-foot office.

Another $873.11 million would go to state agency building projects under Evers’ recommendations.

The Department of Administration, for instance, sought nearly $100 million for a new state office building in Milwaukee. Evers signed off on the borrowing, which would finance the construction of a 200,000 gross-square-foot office, replacing the 55-year-old state government building. Tenants would include the DOA, the Department of Children and Families, Health Services, Revenue, and Public Instruction.

Often forgotten in capital budgets are the costs after the facilities are constructed.

“An annual budget will need to be developed for the operational needs of the new facility,” states Evers’ capital bonding plan, referring to the Milwaukee government office. “It is anticipated that the project will impact the DOA annual operating budget expenditure authority due to costs to maintain and operate the parking facility.”

Again, the costs beyond construction include $21 million in annual operating expenses for the facilities.

Some agencies got much less than they asked for. The Department of Veterans Affairs sought $71.5 million in building and renovation projects. Evers recommended $18.5 million.

Evers’ recommendation came with a stipulation, that the building commission would not authorize construction of the museum until the historical society certifies the $30 million gifts and grants included in the $100 million plan are secured to finance a portion of the project.