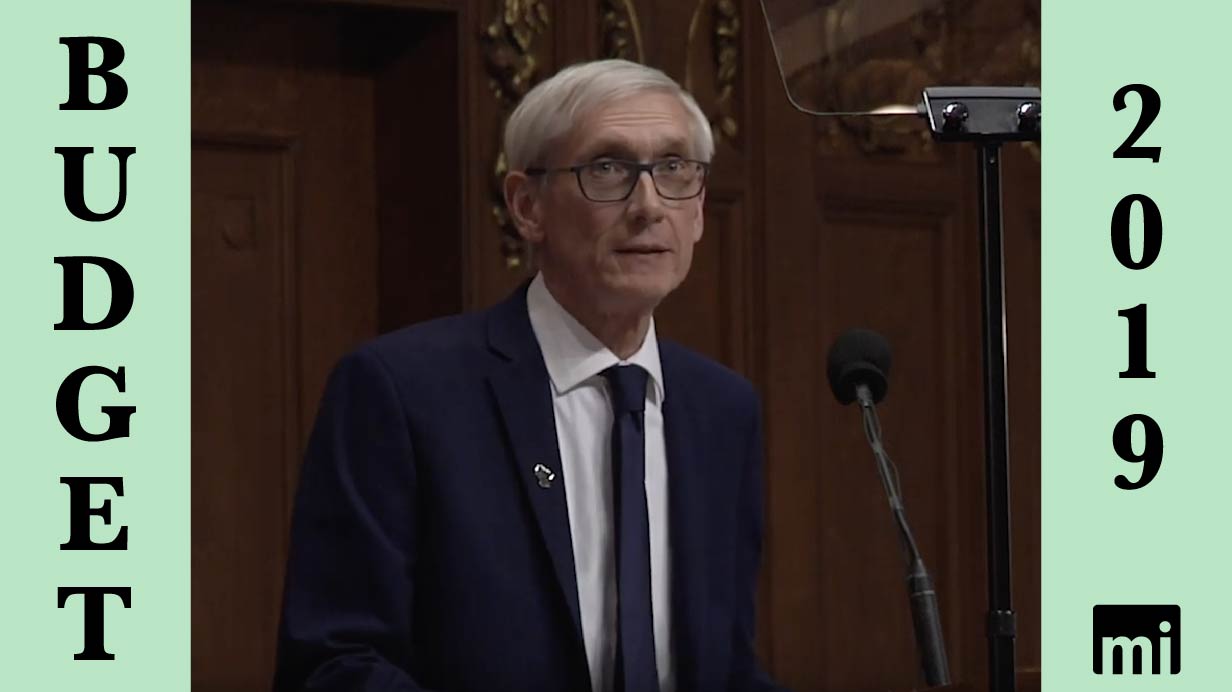 Republican leadership quickly panned the Democrat's proposal, calling it nothing more than a “liberal tax-and-spend wish list” and vowing to start over and build their own budget in Joint Finance Committee. #wiright #wipolitics Click To Tweet

MADISON, Wis. — Gov. Tony Evers on Thursday rolled out his first budget proposal, a hefty two-year plan that increases spending a whopping $7 billion and dramatically expands the size and scope of Wisconsin’s government to pursue a litany of liberal initiatives.

The governor wants to expand Medicaid, he wants to pump $1.4 billion in new spending into K-12 education, he wants higher pay for teachers, $150 million more for the University of Wisconsin System…and the list goes on.

Republican leadership quickly panned the Democrat’s proposal, calling it nothing more than a “liberal tax-and-spend wish list” and vowing to start over and build their own budget in Joint Finance Committee.

“It’s about creating a Wisconsin that works for everyone, a Wisconsin for us,” he said. “This isn’t the Tony Evers budget, the Democratic budget, the Speaker’s budget, or the Republican budget — this is the people’s budget. And it’s one we crafted together.”

Republican leaders countered that Evers’ budget appeared to be crafted almost exclusively by liberal, grow-government interests, a spending plan that pushes everything from legalization of medical and recreational marijuana to driver’s licenses and IDs for illegal immigrants.

The governor wants to expand Medicaid, he wants to pump $1.4 billion in new spending into K-12 education, he wants higher pay for teachers, $150 million more for the University of Wisconsin System, an “unprecedented” $600 million increase in special education spending, $600 million more for transportation (with the help of an 8-cent increase on each gallon of gas), $200 million more in additional funds for the troubled juvenile justice system, $70 million in bonding to address water quality in what Evers has declared as the “Year of Clean Drinking Water.”

He wants more government workers — hundreds more. In the second year of Evers’ budget, the state government workforce would rise to 71,990 employees, an increase of 701 positions from the current budget. The lion’s share of the new jobs would be on the UW System payroll, and Evers would add nearly 100 corrections positions, according to the budget document.

How would Evers — Wisconsin’s taxpayers, really — pay for it all? Taxes. Billions of dollars in new and expanded tax revenue.

The governor would tax capital gains, manufacturers, out-of-state broadcasters, e-cigarettes and cigarillos. He would eliminate the deduction for private school tuition under the school choice program. He would bring Wisconsin into greater conformity with the changes in 2017’s federal tax reforms, hitting more businesses and individual taxpayers. And he would hire more tax auditors — 24 — and tax compliance officers — 12 — to go after delinquent taxpayers.

The governor’s budget estimates that raising the tax rate on e-cigarettes and vapor products to the full rate imposed on cigarettes would generate $34.7 million over the life of the two-year budget. Wisconsin currently has the 12th highest cigarette tax in the nation, at $2.52 a pack, according to the Tax Foundation.

Evers’ tax-and-spend plan includes raising the capital gains tax on high income earners from the current effective rate of 5.355 percent to the 7.65 percent top income tax rate. His administration estimates doing so would raise $285.1 million in new revenue in the first year, $220 million in the second year.

He didn’t mention it Thursday evening, but Evers’ budget plan includes his middle-income tax-cut proposal. The governor last month vetoed a Republican tax-cut plan paid for by the projected $1.8 billion in new revenue over the next two years. Evers called the Republican bill unsustainable. His tax relief package would be financed in part by raising taxes on some manufacturers by limiting the popular Manufacturing and Agricultural tax credit implemented during Republican Gov. Scott Walker’s tenure.

Capping the tax credit would generate about $517 million over the biennium to help pay for the $834 million tax cut-plan, according to the budget document.

Evers’ spending plan pledges about $1 billion in total tax relief, but a sizable chunk of that has to be paid for by other revenue sources.

The governor wants to increase the Earned Income Tax Credit for low- to moderate-income working individuals. Varying rate increases for individuals and families would cost the state coffers more than $53 million over the biennium, according to the budget document.

And Evers would restore indexing on the Homestead Credit, expanding eligibility to approximately 160,000 new filers while enhancing it for over 100,000 current claimants. That would cost about $39 million in the second year of the budget.

The governor’s budget plan calls for an 8-cent per gallon gas tax hike, the return of indexing and fee increases to boost transportation revenue by $300 million a year.

“Everyone is going to have to give a little to make this work. That’s compromise,” the Democrat said.

Evers seeks significantly more funding for a Department of Transportation that, as MacIver News Service first reported Thursday, has failed to comply with several provisions in a state law written in the aftermath of a bombshell audit of a troubled government agency that wasted billions of taxpayer dollars.

Audit Bureau: DOT Still Not Complying With The Law

Evers says the gas-tax hike would be greatly offset by a repeal of Wisconsin’s minimum markup law, at least in the area of motor fuel. The law, crafted during the Great Depression, artificially raises the price of certain products. It sets a government-mandated price floor causing Wisconsin consumers to pay more — in some cases, a lot more, as MacIver News Service has extensively reported. State Sen. Dave Craig (R-Town of Big Bend) earlier this year urged the governor to repeal the entire minimum markup law, which Craig said has “far surpassed its life expectancy.”

Evers’ budget means property tax increases, a burden his predecessor, Walker, and the Republican-controlled Legislature lowered on average over the past eight years.

Onto education. Here's a breakdown of the past three K-12 education budgets. #wipolitics #wiedu pic.twitter.com/VcNJVPn7Zf

The governor said the people of Wisconsin have spoken, and they want the state to “fully fund our public schools.” Evers laments that “more than 1 million Wisconsinites have raised their own property taxes to support local schools in their communities.” They did so, of course, through the mechanism of referendum that offers school districts the ability to set their own priorities and not make taxpayers elsewhere pick up an ever-increasing portion of the tab.

Evers’ budget plan calls for a return to the state picking up two-thirds of K-12 funding, something Republicans have said they are open to. The governor wants $1.4 billion in additional spending for Wisconsin schools, more than double the historic dollar increase in the last Walker budget.

Scores of School Choice proponents, including students, rallied in the Capitol rotunda before Evers’ budget address.

As @govevers discusses the need for special education, he would freeze the Special Needs Scholarship Program. These programs are wildly popular among Wisconsin families #wiedu #wipolitics pic.twitter.com/00IRVh9QPr

Evers’ budget calls for raising teacher salaries, asserting that Wisconsin educators are paid less than the national average. But as MacIver News Service first reported in January, Wisconsin schools spend almost half their revenue on overhead, with only 54 percent actually going toward classroom instruction.

He maintains the tuition freeze on UW System tuition that Republicans put in place several years ago.

“But our universities shouldn’t have to sacrifice affordability for quality education. So, we’re not just going to freeze tuition, we’re also going to fund that freeze,” the governor said. Higher ed gets a $150 million boost in Evers’ budget plan.

As expected, Evers’ budget would expand Medicaid in Wisconsin. In raising the income eligibility rate to well above the poverty line, taking the Obamacare money would expand state-funded health care to 82,000 more Wisconsinites, Evers asserts.

“That means if you like your health care, you may be able to keep it, but it’s going to cost you a whole lot more,” Steineke said.

“And because we’re accepting these federal dollars, we have the opportunity to invest in programs that improve health care access and affordability across our state,” the governor said.

It also means that Wisconsin will be on the hook for 10 percent of the “free” federal money, taxpayers across the country in general will have to pay for Wisconsin’s Medicaid expansion, and the government funding will feed a failing federal health care law that has pushed premiums sky high and depleted the health insurance marketplace.

“That means if you like your health care, you may be able to keep it, but it’s going to cost you a whole lot more,” said Assembly Majority Leader Jim Steineke (R-Kaukauna).

In calling for Medicaid expansion, Evers referred to a Maquette Law School poll that found 62 percent of respondents are in favor of taking the federal money. He did not, however, note that, according to the same poll, a majority of respondents do not like the idea of a hike in gas taxes and fees.

It rolls back some of the state welfare work requirements that Walker and Republicans put in place over the past eight years. It calls for removing 17-year-olds from the adult criminal justice system (Wisconsin is one of the few states with such a law), and puts the Badger State on the path to legalizing medical marijuana as it decriminalizes possession and sale of 25 grams or less of weed.

Up In Smoke: Evers’ Claim About Pot And Prison Quietly Disappears

In another nod to his liberal base, Evers announced an initiative that will allow illegal immigrants to receive driver’s licenses and ID cards.

“This makes our roads and our communities safer, and helps strengthen our economy and Wisconsin families,” the governor said.

Senate Majority Leader Scott Fitzgerald (R-Juneau) called the governor’s spending plan a “1,000-page press release, not a budget.” He said Evers missed an opportunity to work with the Republican majority to create a “real and family-supporting” budget.

“This budget is a liberal tax-and-spend wish list,” Vos said, adding that the billions of dollars in budget increases are tantamount to raising the tax burden by $1,000 for “every man, woman, and child in this state.”

Republicans say they are willing to work with the governor to produce a reasonable budget, but Evers’ massive budget proposal appears dead on arrival.

“Governor Evers is digging another hole that Republicans will have to fill,” the lawmakers said, referring to the fiscal mess Walker and the GOP-controlled Legislature inherited from the last Democratic governor, Jim Doyle, in 2011. “We can’t afford Tony Evers’ budget.”

Republicans say they are willing to work with the governor to produce a reasonable budget, but Evers’ massive budget proposal appears dead on arrival.

Republican leadership said they will begin from base, building a budget that Vos believes the GOP-controlled Legislature will pass by July 1, the beginning of the new fiscal year. Of course, Evers has one of the most powerful veto pens in the nation. But if he vetoes the Legislature’s budget plan, state government will continue to operate under current spending levels. And the governor’s veto authority doesn’t grant him the power to add, only to subtract.