The task force that Evers called for last month in his state of the state address was made up of road builders, big government bureaucrats, big government lobbyists, big labor, and environmentalists.

“Many of us were concerned this would all be preordained, and it appears to be just that,” said state Sen. Tom Tiffany (R-Hazelhurst), who warned earlier this month that Evers’ so-called Transportation Stakeholders Task Force would prove to be a “tax force” — a political dog and pony show to grease the skids for tax increases.

You could see this one coming from a mile away, critics say.

It began when the Democratic governor nominated long-time transportation lobbyist Craig Thompson as his secretary of the Department of Transportation. The task force that Evers called for last month in his state of the state address was made up of road builders, big government bureaucrats, big government lobbyists, big labor, and environmentalists. A few Republican lawmakers made the cut, but not one representative from taxpayer advocacy groups was invited to the two hastily scheduled meetings this month in Madison and La Crosse.

Before the task force adjourned, it gave its collective, full-throated endorsement of a 5.5-cent fuel tax increase, which would increase one of the higher gas taxes in the nation. Task force members also highly recommend indexing, eliminated by the Legislature in 2006. According to the DOT, indexing, which ties the gas tax to the rate of inflation, would raise $55 million in additional annual revenue by the third year of implementation, if indexing is not used to “catch-up.”

Task force members clearly seemed of one mind: Tax and fee hikes first, reforms to a bloated state agency that has cost taxpayers billions of dollars in bad planning and bad policies an afterthought at best.

“Go ahead and increase the gas tax/excise tax and then go ahead and bring back the indexing,” Abe Weber, vice president of the Wisconsin Airport Managers Association, told his colleagues in La Crosse.

“So, we started with, obviously, a gas tax increase/indexing to raise enough revenue to not only be able to pay for state roads and highways but also to filter down to the local governments as well,” Racine County Executive Jonathan Delagrave said.

But wait, there’s more. Much more.

“We should increase the gas tax by 5 1/2 cents, and that would get us to that $180 million annually to maintain the current system conditions,” said Curt Witynski, deputy director of the League of Wisconsin Municipalities. “But we also thought we had to have a number of options out there on the table to discuss as far as revenue increases. We also supported reestablishing the gas tax indexing and increasing the registration fee by $25, and that was for not only the light trucks and vehicles but also the heavy trucks as well.”

Such sentiments should come as no surprise. In convening the task force, Evers told members that DOT doesn’t have a spending problem, it has a revenue problem.

Speaking to reporters last week, Evers said there seems to be “consensus” on transportation funding.

“From what I hear at least part of it is gas tax increases,” Evers aid. “But, again, I want to make sure the final report is on my desk before we insert it into the budget.”

Such sentiments should come as no surprise. In convening the task force, Evers told members that DOT doesn’t have a spending problem, it has a revenue problem.

“A lot of it is an issue of revenues, and we’re hopeful that you’ll take that on and come to a good conclusion there,” the governor said.

“I look at their process, where they kind of had a hand-picked group of people meet twice in a week. I think it sounds to me like it was all ideas the DOT came up with before. So there’s no really new ground here that’s being plowed 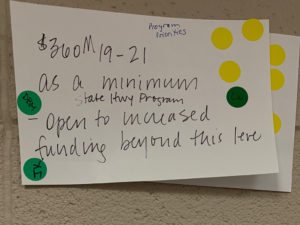 . It’s kind of the same argument over and over,” the Rochester Republican told reporters last week.

While hiking the fuel tax and restoring indexing garnered the most support, the task force addressed a long list of potential revenue “enhancers.”

One of the many hand-written posters detailing the various options noted the pursuit of $360 million of additional revenue for the next budget, and that task force members were “Open to increased funding beyond this level.”

There was some interest in a proposal that would implement a 5 percent sales tax on motor fuel, something Wisconsin consumers currently don’t pay.

“If the exemption were eliminated and all revenue were directed to the Transportation Fund, we estimate that by the third year we would raise about $475 million in additional revenue annually,” a DOT presentation of revenue options notes. While Illinois and Michigan impose such a tax, the cost to consumers and service stations can’t be ignored.

Other ideas under deliberation included a sliding annual registration fee on new vehicles based on the vehicle’s value. The progressive fee would continue over the life of the vehicle registration in Wisconsin.

Several counties proposed asking the Legislature for the authority to raise the sales tax, they say, for road repairs. 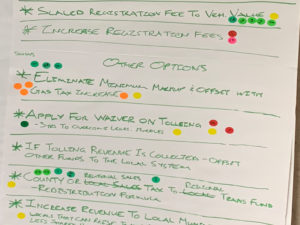 “We also wanted to make sure that we are looking at at least an application towards tolling and what that can generate. We know that takes a long time so we should at least be starting the process,” Delagrave said.

Evers’ DOT secretary-designee made it clear where he’s heading, and toll roads don’t fit into his short-term fix for what he and his transportation interests paint as a massive funding hole.

“I think for today we want to look at user fees that we have existing that we could collect without a lot of administrative costs, but we’re more than open to looking at more options for down the road,” Thompson told Wisconsin Public Radio last week.

A DOT official last week told MacIver News Service that she could confirm that there are no additional meetings of the task force scheduled prior to Evers’ budget unveiling, expected at the end of this month.

On Thursday, agency spokeswoman Kristin McHugh said she was looking into MacIver’s other questions, including whether the DOT would continue to follow cost-saving recommendations issued by the legislative audit committee and the agency itself under former Transportation Secretary Dave Ross. McHugh had not provided answers to MacIver’s remaining questions as of this post.

The DOT lost $44.7 million by failing to solicit more than one bid for 363 of its construction contracts between January 2006 and December 2015. Had each of those projects received just one more bid, DOT would have saved $4.5 million per year from ’06-’15, according to an audit of the agency.

And taxpayers have been on the hook for the agency’s failure to recognize the huge cost savings to be had in the design-build approach. The practice integrates the standard activities involved in transportation projects under a single contract. The Texas Department of Transportation, for instance, reported its best-value design-build proposals usually come in 15 to 20 percent below the engineer’s estimates, according to a Texas A&M Transportation Institute Study. And design-build projects in the study typically were completed from three to 10 months early, another big cost savings.

There was little talk of reforms and project savings among the “transportation stakeholders.”

“I’m hoping Gov. Evers halts course from what he’s been saying, that he’s looking at the recommendations from, let’s call it what it is, a ‘tax force,’” Tiffany said. “I hope he reverses course and lives up to the commitment he made to voters during the campaign, to not raise taxes.”