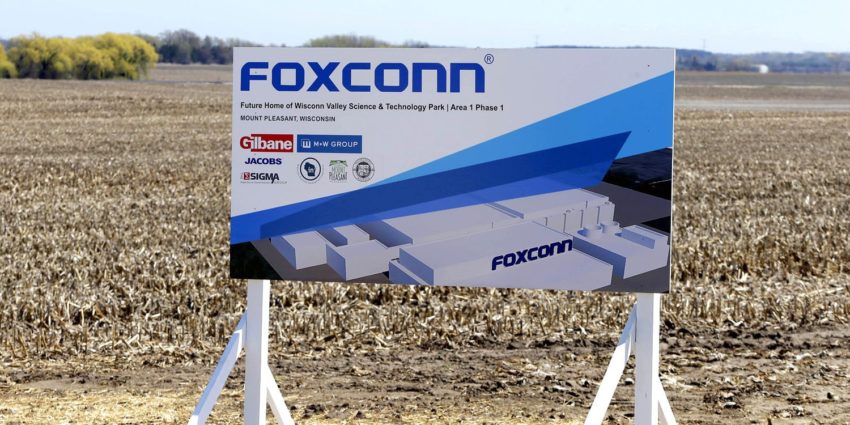 It’s only been a year since Mount Pleasant, Racine Co., and #Foxconn signed the agreement to bring $10 billion investment, thousands of new jobs to SE Wisconsin, and that is going to continue on, says Dave DeGroot. #wiright #wipolitics Click To Tweet

MADISON – Despite all of the campaign rhetoric from Gov.-elect Tony Evers and the left, it’s business as usual for Foxconn Technologies Group and the tech giant’s planned $10 billion development in southeast Wisconsin, according to a local government official.

Mount Pleasant Village Board President Dave DeGroot said construction has ramped up at the Foxconn site over the past year.

Crews have completed the exterior of Foxconn’s first building, a 120,000 square-foot warehouse and multi-use facility slated for occupancy by early 2019. The building is small by Foxconn’s standards.

“It’s only been a year since the village of Mount Pleasant, Racine County, and Foxconn Group signed an agreement to bring $10 billion worth of investment and thousands of new jobs in southeast Wisconsin, and that is going to continue on, Mount Pleasant village president Dave DeGroot told MacIver News Service recently on the Vicki McKenna Show, on NewsTalk 1130 WISN.

“In the last couple of months we’ve seen hundreds of pieces of equipment working the site every day,” he added.

Crews have completed the exterior of Foxconn’s first building, a 120,000 square-foot warehouse and multi-use facility slated for occupancy by early 2019. The building is small by Foxconn’s standards.

The Taiwan-based electronics manufacturing company plans a massive manufacturing campus the size of 15 Lambeau Fields. Foxconn would receive $3 billion in tax incentives from the state, if it comes through on its pledge to create 13,000 high-tech jobs. It could receive more than $1 billion more in local incentives.

DeGroot said the 3 million-square-foot concrete pad for the production plant is in place. Vertical construction on the factory is slated to begin in spring.

Meanwhile, the village recently acquired one of the last remaining pieces of land for the project, at a cost of $3.6 million. With the acquisition, Mount Pleasant has purchased nearly 85 percent of the land needed for the development, Foxconn project director Claude Lois told Wisconsin Public Radio. Last year Foxconn deposited $60 million in a village account, to be used for land acquisition for the project.

Evers has been highly critical of the economic development deal, leading some to believe that the governor-elect will try to change terms of a contract Foxconn signed in good faith. Evers has said he intends to hold Foxconn’s feet to the fire, but has offered no specifics on precisely what that means.

Despite Tony Evers’ campaign rhetoric, DeGroot doesn’t sound worried that much will change under a new administration.

DeGroot doesn’t sound worried that much will change under a new administration.

“Once you back out the election rhetoric … from what I’ve heard, from what Gov.-elect Evers has said, he’s spoken about working with Foxconn leadership to continue the project,” the village president said. “It’s our feeling that we’re all in this for the same thing; we want jobs, economic development, we want knowledge workers. Those are the kinds of jobs everybody drools over.”

“I would hope we would all be working in the same direction,” DeGroot said, adding that he is looking forward to talking with Evers and his transition team soon about the future of the Foxconn project.

Assembly Speaker Robin Vos said he’s concerned about Evers’ earlier comments and the statements of some of the liberals surrounding him, some demanding changes to the contract or talking about shutting the project down altogether. The Burlington Republican said he trusts Foxconn to do what’s right.

“I have met with them very regularly and I know they want to make this a huge success, not only because they have made promises to sign the contract but because it’s in their own financial interest and the interest in our state,” Vos said on a recent MacIver Newsmakers podcast. He said he will do everything in his power to make sure the state “sticks to the letter of the contract.”