With a record $1.4 billion in school referenda spending on next month’s ballot, to say that contractors don’t have a dog in the fight sounds disingenuous at best to lawmakers like Stroebel - and to plenty of taxpayers fatigued by the… Click To Tweet

The Associated General Contractors of Wisconsin, however, bristles at the notion that their members have “become more aggressive about pushing for higher school spending,” as a recent article in the construction trade publication the Daily Reporter reportedly asserted.

But promotional materials from some of the largest contractors in the state would suggest otherwise.

“We’re proud to say we have an 85 percent referendum success rate,” noted Janseville-based contractor JP Cullen on its website.

“We have a long history of working collaboratively with school districts to help them make smart decisions that will generate public support and ultimately pass referendums,” declares Hunzinger Construction on its website.

Building management firm Findorff on its website proclaims that it “helped” the Sun Prairie School District “pass a $89.5 million facilities referendum in November 2016.”

VJS Construction Services notes the first step in building a school is a “successful referendum.”

“At VJS, we work in tandem with educational leaders to assist in developing a solid campaign that generates voter support,” the website claimed, at least up until recently, before the URL was mysteriously rendered inactive.

The same with JP Cullen’s promotional series titled “Roadmap to Yes,” the firm’s “proven, adaptable” path to “referendum success.” That link, like other “successful referendum” pitches on several general contractor websites, have disappeared in recent days.

Here’s a promotional video from JP Cullen about how it ran Edgerton’s last referendum campaign featuring the district’s superintendent. Cullen was consulting the district before the referendum was announced and gets a no-bid contract if it passes. #wiright pic.twitter.com/RU8tDmdkBz

State Sen. Duey Stroebel, a vocal critic of the rising tide of school referenda and what he asserts are the cozy relationships they have created between districts and builders, recently took aim at the apparent disconnect between Barker’s protestations and the quickly disappearing online claims of AGC members.

“I’d advise he (Bob Barker) read his members’ own marketing materials. This practice of school boards hiring de facto political consultants, who masquerade as neutral experts, is even more concerning given the lack of competitive bidding,” Stroebel wrote in the Daily Reporter in his response to Barker’s op-ed.

Barker is correct when he says that referenda are “local issues to be decided by local taxpayers,” and that construction firms “respond as businesses by providing a service to school districts.” There’s nothing illegal about it, and, Barker argues, nothing unethical.

But with a record $1.4 billion in school referenda spending on next month’s ballot, to say that contractors don’t have a dog in the fight sounds disingenuous at best to lawmakers like Stroebel – and to plenty of taxpayers fatigued by the endless flow of school spending ballot questions.

Despite contractor assertions to the contrary, the referendum rush is replete with transparency troubles. Taxpayers are too often left in the dark about total costs of referenda, and the funding doesn’t always go to the items noted on the ballot questions.

The Edgerton Facilities Advisory Committee explains how JP Cullen provides inflated cost estimates during the planning process – which allows the district to spend excess funds on projects that voters did not approve. #wiright pic.twitter.com/mfAqklgSmJ

Stroebel has called for legislation to address these transparency questions, as well as authoring a proposal that would demand open and public bidding for school district contracts.

“Public bidding is currently required for all other local government projects in excess of $25,000,” Stroebel wrote in his op-ed piece. He points out that should Wauwatosa School District voters approve a $125 million referendum next month, contractors would “demolish and rebuild four schools without a transparent, competitive process that the city of Wauwatosa is required to follow for a $30000 project to repaint city hall.”

“The high cost and highly technical nature of construction projects make transparency and accountability measures critical if we are to feel assured taxpayer dollars are not being wasted,” the senator wrote.

Barker, of the Associated General Contractors of Wisconsin, rightly asserts that most school districts rely on the expertise of architects and contractors to assess school building needs. In his column, Barker hammered home the importance of local voters deciding school referenda. 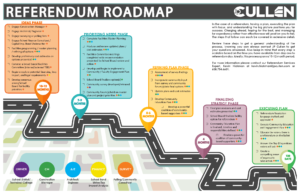 But are the needs of taxpayers always a priority in the referendum rush?

Radio host Mark Belling took aim at the firm earlier this year in an op-ed. With School Perceptions’ help, “…school boards and superintendents are using public money to mislead their residents and pretending to conduct honest surveys,” Belling wrote in the Waukesha Freeman piece.