The school board has until August 25th to act on a proposal to build four new elementary schools, raising property taxes by more than $450 on the average area home

Wauwatosa School District may ask voters for $125 million in November following a committee recommendation on Monday night. The district’s Facilities Advisory Committee (FAC) made its official recommendation at a school board meeting.

Following a $125 million recommendation by its facilities committee, the Wauwatosa school board must now decide whether or not to go to referendum this November.

The school board must decide how to proceed by August 25th, the deadline for formal ballot language approval. The estimated tax increase would total $189 annually per $100,000 of property value, or approximately $468 on a median value home in Wauwatosa.

The referendum, which would be held in November 2018, would raise property taxes to build four new schools. McKinley and Underwood Elementary Schools would be completely replaced on the same sites. Lincoln and Wilson Elementary Schools would be rebuilt as “hybrid” schools, maintaining their historical structures while adding new construction around or next to the existing buildings. If passed, the additional funds would go towards building maintenance, increased safety and security, update of technical education facilities and improving ADA accessibility at all 14 district schools. The four elementary schools that the FAC proposed replacing are the most in need of maintenance updates, including HVAC systems replacement.

The decision follows a community survey sent to residents in late April. The survey found potential support for a spending referendum up to $125 million outside of normal property tax levies.

If put on the ballot and passed, property taxes in Wauwatosa would increase by $189 annually per $100,000 of property value, or approximately $468 on a median value home.

Referenda have become more commonplace in recent years, with voters deciding to raise their own taxes. While they are local voting decisions, the tax base is increased statewide, effectively raising taxes across the state. That’s because the extra spending is rewarded in the general aids formula, which means other districts subsequently get less state aid to offset property taxes.

The FAC, which made the official recommendation to the school board, was created in February 2017 to study the needs of the district’s facilities following a facilities master study finished in December 2016.

A total of 3,432 survey responses were collected, resulting in a margin of error of +/- 1.9 percent. The survey was sent to all school district residents as well as all district staff members, with 89 percent of survey respondents living and paying property taxes in the district. 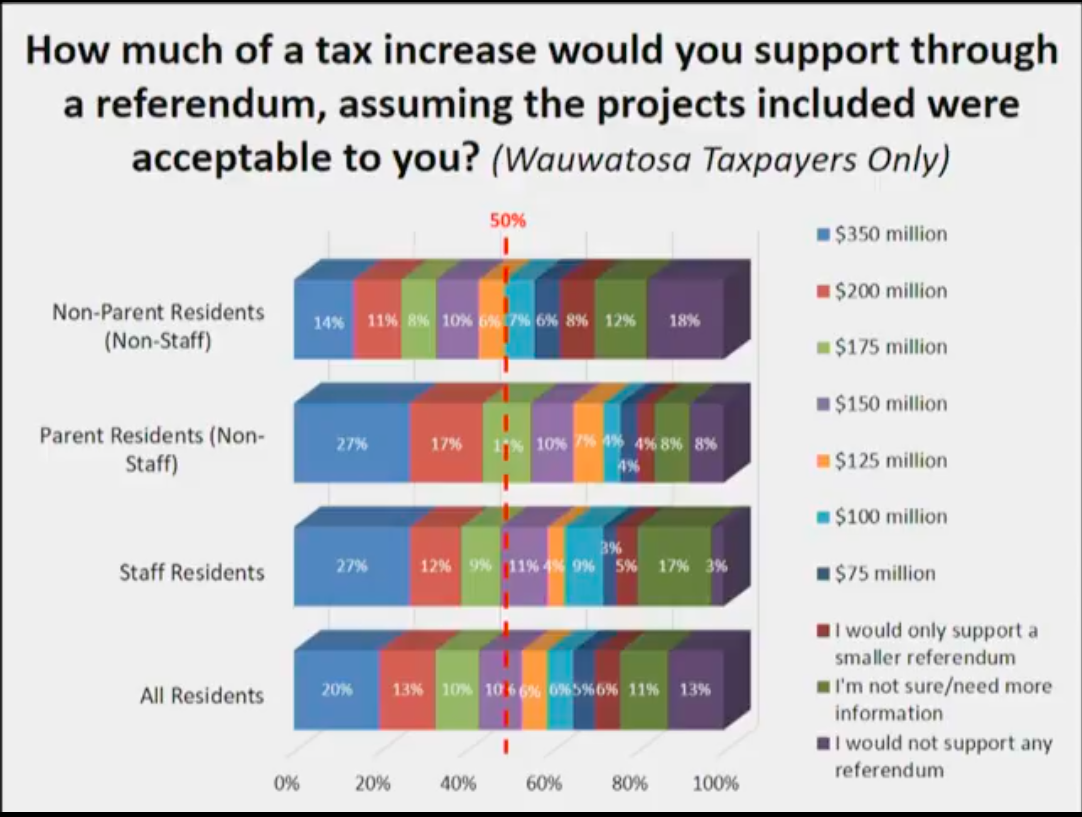 Non-staff, non-parent residents are the most important demographic within the survey, according to survey conductors School Perceptions, because they make up the largest voting bloc in the community. That group showed support for a referendum, with 49 percent of respondents  supporting a $125 million tax increase, the smallest among the four groups.

Non-staff non-parent residents are the largest voting block in the community. At 19 percent, that group had the largest number of respondents saying they would not support any tax increases for a referendum. 49 percent said they would support a $125 million tax increase.

The survey tested options for a referendum ranging from $75 million up to $350 million, which would be the largest single referendum in state history. Just 20 percent of survey respondents said they would support a referendum increasing taxes by $350 million.

The Long-Range Facilities Master Plan identified $350 million in projects across the district, including $184 million at elementary schools, $48 million at middle schools, and $118 million at the high schools. A $350 million referendum would increase taxes by $454 per year per $100,000 of property value.

Of all the proposed spending ideas, survey respondents rated building maintenance to be the highest priority, followed by updating safety and security systems. The school district also asked for $367,395 for school safety initiative grants from the state under its new Office of School Safety in the Attorney General’s office. Any referendum passed would be in addition to the other dollars coming from the state.

Wauwatosa schools average 73.5 years in age, according to the district. Emergency spending on facilities has increased in recent years, with capital maintenance projects alone increasing 15 percent in the last year.

At the same meeting, school board members also voted to approve their preliminary 2018-19 district budget. The plan increases spending by 1.7 percent over last year, adding to $89.3 million overall. Employees see salary increases ranging from 2 percent for teachers to 5.4 percent for support staff.

The budget document is Wauwatosa’s first since 2015-16 that increases spending overall. Cost drivers such as generous benefits packages drive the growth in the budget. The district estimates health insurance costs will grow by 10 percent in the next year. Dental benefits will grow by 7 percent, and “other benefits” increase by 8 percent.

Wauwatosa’s school board will meet in the coming weeks to discuss how to proceed and whether or not to put referendum language on the ballot. Stay tuned for further coverage.