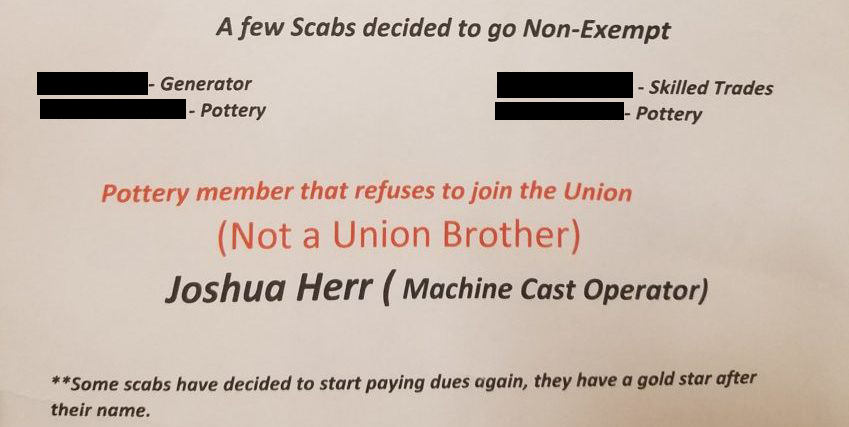 Herr says he has repeatedly told United Auto Workers Local 833 leadership that he doesn't want to join. The union chiefs won't take no for an answer, Herr said. #wiright #wipolitics Click To Tweet

MADISON, Wis. – The Kohler Co. employee who claims he has been repeatedly harassed and threatened by labor leaders because he refuses to join the local union says company officials are intervening on his behalf.

Josh Herr tells MacIver News Service he met with a Kohler attorney this week and was told that management is discussing the allegations with union management.

The attorney simply pointed them to the first page of the collective-bargaining agreement, Herr said.

“It says there shall be no discrimination, coercion, intimidation or threats against employees because of membership or nonmembership in the union,” he said. “It is literally written on the front page of the Kohler rule book.”

Herr claims he has faced all of the above since beginning his job in Kohler’s pottery plant more than seven months ago.

At one point, Herr said Tayloe called him while he was on the job and threatened him.

“He said, ‘We really don’t like when people don’t join the union,’” Herr said. “He told me there were two other people in the pottery building who didn’t join the union and that nothing good happened to them.”

“He said, ‘I don’t want anything bad happening because you’re not joining,’” Herr added.

It was the latest in what the employee described as several subtle threats from union management.

“He is passively aggressively threatening me with the very union he wants me to join,” Herr said.

Herr doesn’t have to join a union. And under Wisconsin’s Right to Work law, Herr cannot be compelled to join a union or pay union dues. Under federal employment laws, organized labor cannot threaten, intimidate or otherwise create hostile workplaces, including for employees who do not want to join a union.

Tayloe accused Herr of lying and “blowing this out of proportion.”

“Whatever he’s up to I hope he’s having fun. None of that happened,” the local president told MacIver News last week.

Recently, Herr found a sign on the back of the plant punch clock praising 19 Kohler workers who had started paying union dues. Each name was accompanied by a gold star. #wiright #wipolitics Click To Tweet

In a statement, Tayloe said he is “constantly walking the floor of the plant to have discussions with people from the hourly workforce.”

Discussion is one thing, but Herr said union leadership refused to hear him when he told them on several occasions that he saw no value in the organization.

Recently, Herr found a sign on the back of the plant punch clock praising 19 Kohler workers who had started paying union dues. Each name was accompanied by a gold star.

At the bottom it declared in red: “Pottery member that refuses to join the Union.”  Joshua Herr, machine cast operator, the union sign boldly stated, is “Not a Union Brother.”

Tayloe claims the sign didn’t come out of the UAW hall, and wasn’t sanctioned by the union.

“When I’m made aware of postings, memos, correspondence, etc (sic) that are not Kohler or UAW sanctioned, myself along with our representatives remove them as best as we can control,” he said in the statement.

But whoever put up the sign, Tayloe said, is entitled to freedom of speech.

Not harassing speech on the plant floor of a private enterprise, however.

He said Kohler management is seeking an apology letter from the union and a promise to stop any harassing conduct.

A representative from the company could not be reached for comment Tuesday.

Herr said he has not experienced any harassing behavior since he went public with his story last week. Kohler, he said, has been very supportive.

“It’s nice knowing I have support, and knowing whatever the union does I have the company behind me,” he said.