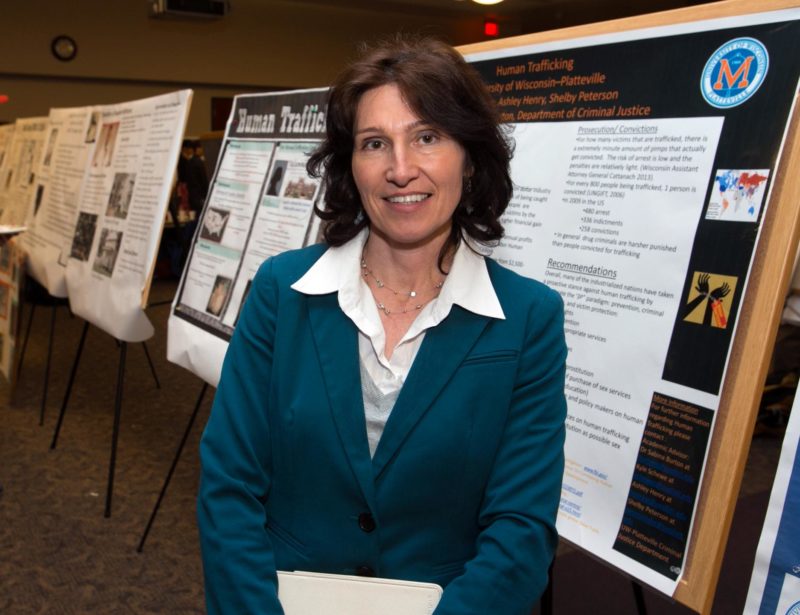 “I think they wanted to give me a ‘special’ Christmas present,” Burton said sardonically. “It was just cruel, but that’s how they work. They time everything for maximum injury.” #wiright #wipolitics Click To Tweet

MADISON, Wis. – Sabina Burton just got a lump of coal for Christmas.

The embattled University of Wisconsin-Platteville Criminal Justice professor who blew the whistle on misconduct in her department received notice from a faculty appeals panel recommending Burton’s dismissal. The panel, handpicked by a the chair of the faculty senate committee who has worked in UW-Platteville administration, sided with Chancellor Dennis Shields in calling for the firing of the tenured professor.

“After considering all testimony and materials submitted by Dr. Burton and UW-Platteville Administration … the panel finds clear and convincing evidence in this case to establish just cause for dismissal,” the panel’s letter to Shields states.  The five-member panel unanimously moved for the recommendation, finding in favor of two of three charges administration had lodged against Burton.

Interestingly, the panel’s letter to Shields is dated Dec. 14. The chancellor didn’t notify Burton of the decision until nearly a week later, on Dec. 20.

“I think they wanted to give me a ‘special’ Christmas present,” Burton said sardonically. “It was just cruel, but that’s how they work. They time everything for maximum injury.”

Burton intends to appeal the decision to the University of Wisconsin System Board of Regents. She has 20 days to file.

“I keep catching myself thinking about teaching ideas and ways to get students engaged and passionate about learning,” the professor said in an email to MacIver News Service. “I just love teaching and research in this field too much. Not being around students has been depressing.”

Burton has been excommunicated from campus since January, when Shields ordered her to clean out her office and informed her that she was no longer permitted on campus.

“We concur with the Statement of Charges that Dr. Burton’s behavior was unprofessional and that it significantly harmed the functioning of the Criminal Justice Department,” the panel stated in its findings. “We find that this behavior perpetuated and enhanced the dysfunctional atmosphere in the department and impaired the efficient and the effective operation of the workplace.”

The panel asserts it was “particularly troubling” Burton’s “disrespectful” behavior continued several years after a sexual harassment complaint that sparked Burton’s five-year battle with administration had, according to the panel, been resolved.

Burton disputes the allegations, countering that university administration engaged in a years-long campaign of intimidation and retaliation against her after she stood up for a female student who claimed she had been sexually harassed by a male professor in the Criminal Justice Department.

“I was threatened. I was harassed. I was intimidated,” Burton said.

Burton said she did not, and she has the transcripts to prove it.

At issue, are the recordings she made of department meetings. She said she wanted a record of the harassment she encountered and to be able to protect herself from false charges. Burton’s husband, Roger, eventually posted transcripts of the recordings on a personal website aimed at, the Burtons assert, exposing corruption at the university.

But the recording had been part of the public record long before they were posted online, included as evidence in the professor’s civil rights lawsuit against administrators.

The panel claims that the recordings and transcripts included professional evaluations and other sensitive personnel materials. They didn’t. Burton has provided documents to show as much. She said she was not granted enough time at appeals hearings to challenge false claims by the university.

The panel’s recommendation letter to Shields notes the “expectation of privacy” in faculty meetings, and that Burton’s colleagues and administrators did not know they were being recorded. Wisconsin, however, is a one-party consent state, meaning that only one person in the conversation need know of the recording of a conversation. Still, recording and sharing private conversations stands in conflict of state law, which grants exemptions that shield institutions from disclosure.

Burton, however, was a whistleblower who believed she was being retaliated against by administrators. She would be entitled to some latitude on recording in such cases.

“They are punishing me for making use of Wisconsin law,” the criminal justice professor said.

She asserts the panel was fed one false accusation after another, without evidence from her accusers to back up the claims. Burton has emails and other communications she says disprove the allegations against her, documents she has shown to MacIver News Service.

Burton claims she is being drummed out because she is a conservative on a campus run by partisan liberals.

As MacIver News Service reported last month, documents show Elizabeth Throop, then-UW-Platteville Dean of the College of Liberal Arts and Education, contacted law enforcement after learning that Burton, reached out to Gov. Scott Walker for help in her battles with the university.

In the most recent hearings, Burton’s attorney pointed out several instances where it appears administrators and their legal counsel did not follow system policy in the dismissal and review process. The records note conflicting statements by university officials.

Beyond her appeal, Burton has filed another discrimination and lawsuit against the university, charges she believes will be supported the administration’s move to fire her. The Equal Employment Opportunity Commission issued a right-to-sue letter the professor.

A previous lawsuit Burton filed in federal court was dismissed.

Burton said she has can easily dispute the university’s assertions, if only given the full opportunity. She’s hoping the UW System Board of Regents will afford her that opportunity.

“All I have asked for the last five years is to look at this with an open mind. Look at the facts, look at the evidence,” she said.