MADISON, Wis. – A new report shows that in the fall of 2016, students from 184 Wisconsin high schools were required to take remedial math or English at the UW System as new freshmen.

The report, published earlier this month, documents the number of Wisconsin high school students who are not academically prepared for the rigors of college despite earning a diploma and supposedly mastering the subject matter in high school. It reveals the extent to which our K-12 education system is failing our children.

Students from 184 Wisconsin high schools needed remedial education as new freshmen at the UW System in fall 2016, an uptick from 175 schools last year.

Remedial classes are taken by students for zero credits, but at the full cost of university tuition. The classes do not count toward a degree, but students who fare poorly on college placement exams are required to pass a remedial course before moving on to regular college coursework. The issue is part of a growing trend across the state and country, contributing to high levels of student loan debt and an increase in the time it takes college students to earn a degree.

Fifty percent or more of the graduating classes from 15 high schools needed math remediation as freshmen at UW campuses. Of those 15 schools, nine are in the state’s largest school city, Milwaukee. Nine of the ten schools with the largest percentage of students needing math remediation are also in Milwaukee.

15 schools graduated senior classes where 50 percent or more of incoming UW freshmen needed math remediation. 9 of those 15 schools are at MPS, and 8 of them didn’t make last year’s list at all, suggesting a growing problem.

Surprisingly, eight of the schools with the largest math remediation problem by percentage were not on last year’s list, including the Milwaukee School of Career Technical Education, South Division High School, CEO Leadership Academy, and Saint Anthony High School, all within Milwaukee. Eight in ten or more of the graduates from those schools who went to UW needed math remediation.

The data report offers a new aspect of transparency on this issue. Many of the schools on the list are nationally ranked and touted as some of the best schools in the state or country – a deeper dive, however, showed that they don’t adequately prepare students for college.

Nine of the schools included in the data report received five-star rankings on state report cards released just last month. A full 40 percent of the high schools that “significantly exceed expectations” had graduates who needed math or English remediation upon entering the UW System. 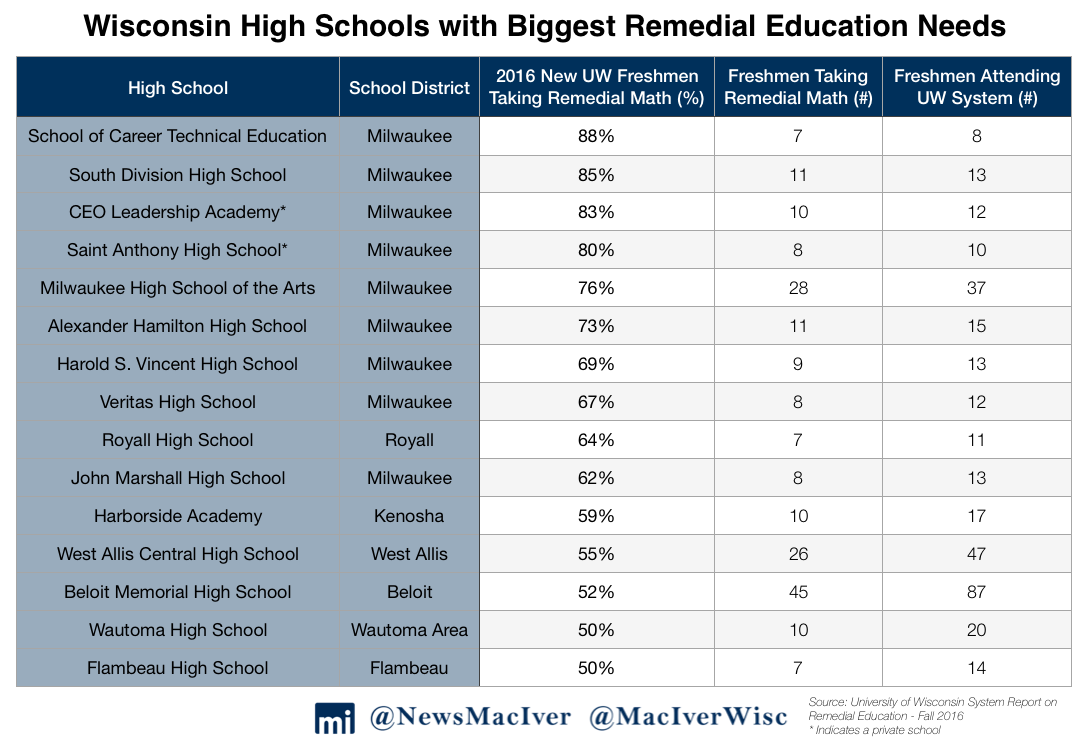 Of the top 10 schools on U.S. News and World Report’s 2017 ranking of the best high schools in Wisconsin, nine sent students to the UW System needing additional math. Carmen High School of Science and Technology, a charter school at MPS, was ranked the best high school in Wisconsin by U.S. News and was the only one that did not appear on the remedial education report.

Kimberly High School sent the most students needing math remediation from any one class: 53  of 148 incoming UW freshmen, or 36 percent of the class, required the zero-level classes. Nathan Hale High School sent 138 graduates to the System, and 50 of them required remedial math.

Of the 49 Wisconsin schools that sent students needing English remediation at the UW, just one is a private school. All except two of those schools also had students who needed math remediation. One school, Alexander Hamilton, sent more than half of its graduating class to UW needing additional English classes, though that school was an outlier. Ten percent or more of graduates from 27 schools needed English remediation at UW.

This year, 18 more schools made the list for needing remedial English.

Compared to last year, nine more schools made the list this time around. However, many high schools who sent substantial numbers of unprepared graduates off to UW – including Bradley Tech, Pulaski, and James Madison University – were not included on the list this year. That would suggest that each of those schools sent fewer than six students to the UW System needing remedial classes, marking substantial improvements. Last year, 77 percent of James Madison University High School’s incoming UW System freshmen class required math remediation.

Out of any single school district, MPS showed the most difficulty in this area, suggesting that many students are graduating and moving on to college without demonstrating proficiency.

A 2015 state law required that this report be published annually. Rep. John Jagler (R-Watertown) discovered that 20 percent of all new freshmen at the UW System require remedial classes in English or math, but the System did not systematically track from where those students came. Now, the annual report lists all high schools that sent six or more students to the System needing such classes.

With all the discussion about college affordability these days, the prevalence of remedial classes may be a good place to start. The cost of in-state tuition averages thousands of dollars per semester, and students pay full price for remedial classes despite receiving zero credits toward their degrees – essentially paying cash for their high school’s failure to prepare them for college.

The MacIver Institute will continue to update this story as more reactions become available.