Despite latest media narrative, Americans know exactly why Obamacare is a mess…and who is at fault

Instead of reporting on Obamacare’s fundamental flaws, illegal subsidies to insurance companies, and catastrophic premium increases, some in the media are pointing the finger at potential “confusion” among customers as the reason why former President Obama’s signature law continues to crater.

In reality, it’s these reporters who are confused about why Obamacare is unraveling. The American people, who have to deal with the law’s disastrous reality, understand why Obamacare is a failure and who is at fault. According to a recent Morning Consult poll, 67 percent of Americans say that Obama and the Democrats are to blame for the ongoing train wreck, including 61 percent of Democrat voters. Only 36 percent think the law is “excellent” or “good” and just 20 percent think President Trump is to blame for the law’s failures. 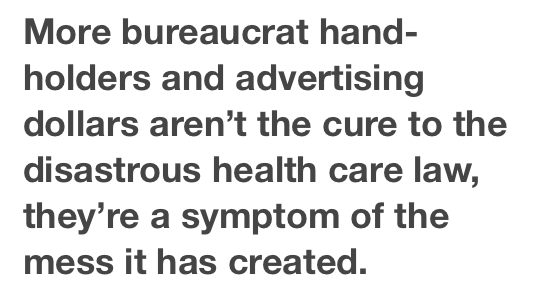 Still, some media reports are channeling Obamacare architect Jonathan Gruber, who famously commented that the “stupidity of the American voter” was critical to enacting Obamacare in the first place. In that spirit, one Associated Press article opens by declaring, “The Trump administration’s efforts to undermine the Affordable Care Act have health care advocates and insurers concerned that the open enrollment period will be one of chaos and confusion.” The reporter apparently forgot about the years of Obamacare’s failures and lies that have been unfolding since long before Trump took office.

The failed system has deprived people of their coverage and saddled Americans with skyrocketing premiums and deductibles. It’s these Americans who are angry – not confused – that they were lied to. They are the ones who helped sweep Trump into office.

The AP article goes on to lament that Trump cut marketing budgets intended to advertise Obamacare plans. It cites exchange officials who complain they don’t have as much money to convince Americans to buy Obamacare plans that they can’t afford or can’t actually use thanks to outrageous out-of-pocket costs.

The condescension and shifting of blame is typical of the big government mindset. What people are really angry about is the fact that the “Affordable Care Act” is anything but affordable, despite the snake oil salesmanship Obama and allies used to sell the scheme.

After years of lies, including the crown jewel 2013 PolitiFact Lie of the Year, “If you like your plan, you can keep your plan,” Americans have had enough Obamacare “marketing.”

Obama also promised that Obamacare would “bend the cost curve down,” but earlier in October we found out that Americans with Obamacare will endure yet another astronomical premium increase. Prices will jump an average of 34 percent nationwide – 36 percent in Wisconsin – in 2018. Worse, tens of thousands of Wisconsinites will lose their coverage at the end of the year.

The latest bad news comes on top of a 16 percent premium increase in 2017.

The largest insurers in the state have abandoned the rickety Obamacare scheme in Wisconsin, including four of the five biggest health insurance companies in the country. Their withdrawal means 75,000 people are now shopping for new coverage, whether they want to or not.

Obamacare is failing because it’s attracting older, less healthy, and more expensive patients. Meanwhile, younger and healthier people are opting out of what is becoming increasingly unaffordable insurance, creating a toxic risk pool shouldered by fewer and fewer insurers.

But that’s not the story being pushed in many corners of the media.

Joining the AP, the Wisconsin Radio Network predicted mass “confusion” as Obamacare open enrollment gets underway, in part because the Trump administration is ending Obama-era payments directly to insurance companies.

Once again, the media is missing the point. These Cost Sharing Reduction (CSR) payments compose about 15 percent of premiums, according to JP Wieske, Wisconsin’s deputy insurance commissioner. Even if the payments continued, Wisconsin’s rate increase would be north of 20 percent, Wieske said.

Moreover, the payments are illegal because they were never approved by congress. Obama simply ignored that pesky old constitution, which gives congress the exclusive power of the purse. How would the media react if the Republicans staked their names to a law that required regular corporate bailouts without congressional approval?

Trump rightly called the unconstitutional payments an illegal corporate bailout and decided to end them.

The AP article is headlined, “A tale of two countries.” In one “country,” states that run their own Obamacare exchanges have the flexibility to spend more on advertising Obamacare plans, hire bureaucrats to guide people through the law’s bureaucratic morass, and extend open enrollment periods beyond the federally run exchanges’ six week window.

More bureaucrat hand-holders and advertising dollars aren’t the cure to the disastrous health care law, they’re a symptom of the mess it has created.

Minnesota is one state that bought into Obamacare early on and runs its own exchange. While Minnesota has more flexibility to hire more bureaucrats and spend more on advertising the unaffordable insurance, Obamacare has cost the state’s taxpayers dearly.

Lawmakers in Minnesota were forced to scramble last year to paper over astronomical premium increases in the state, which ranged from 50 to 67 percent in 2017. While lower-income Minnesotans could rely on federal Advance Premium Tax Credits to help cover the rate hikes, middle class individuals who earn too much to qualify for help were set to be steamrolled. More than 100,000 middle class Minnesotans who don’t receive federal subsidies had to be bailed out by the state – at a cost to state taxpayers now at nearly $800 million.

Unfortunately, Minnesota and many other examples of Obamacare’s repeated failures interfere with the media’s “confusion” narrative and must be ignored for the sake of portraying the law’s troubles as something new so the blame for future failures can be shifted to Trump.

The media’s efforts to drag a red herring through the Obamacare debate – distracting Americans from the actual cause of the law’s death spiral – will only serve to prop up a fundamentally flawed system and stand in the way of real reform that could actually lower costs.

Fewer bureaucrats, marketing dollars, and corporate subsides are not to blame for Obamacare’s downward spiral, and more of those things are not a solution. The only solution to Obamacare’s failures is to get rid of the law and replace it with reforms that increase choices for customers and minimize the federal government’s role in the health care and health insurance business.